How AMC plans to get couch potatoes back to the movies 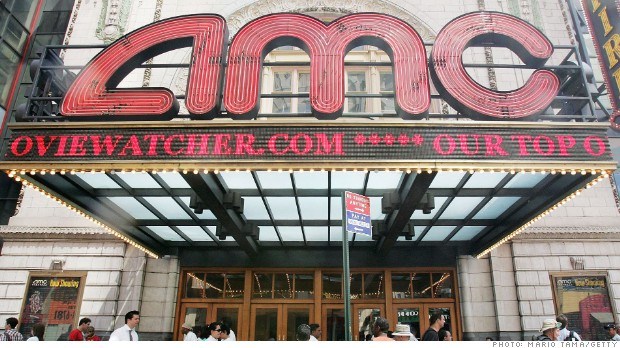 Mario Tama / Getty Images
AMC Entertainment, the nation’s second-largest movie theater chain, returned to the public market earlier this week, closing off what has become the best year for IPOs since the peak of the dotcom bubble in 2000.

The public offering wasn’t nearly as big as Twitter’s (TWTR) or Hilton’s (HLT), but investors nonetheless made a decent bet that the chain has deciphered what’s missing at the movies: dinner.

Whether that’s actually the case is up for grabs, but AMC is doing what competitors aren’t at a time when declining ticket sales have weighed on theaters industrywide. The Leawood, Kan.-based chain is looking to generate more revenue per patron through the sale of dinner and higher-end food options — something smaller independent theaters have tried. With interests in 343 theaters with 4,950 screens, it is the second-biggest theater operator in the U.S., next to Regal Entertainment.

In its debut on the New York Stock Exchange Wednesday, AMC (AMC) raised $332 million, selling 18.4 million shares at $18 a share. That share price came in at the low end of its expected price range of $18 to $20 a share. The stock closed 90 cents higher at $18.90 on its first day of trading — a decent but not spectacular pop, considering the heavy marketing AMC did in the months leading to its IPO. (It offered some loyal movie goers a chance to buy shares at the same price big investors pay). On Friday, the stock closed higher, at $19.68 a share.

It’s clear investors believe that AMC could be more profitable, but the IPO also signals that they’re cautious, too. The company reported a profit of $84.8 million during the nine months ended Sept. 30, reversing a $43 million loss from a year ago. However, growth is somewhat slow. AMC opened three theaters with 25 screens but closed four with 29 screens during that same time period.

AMC Chief Executive Gerry Lopez has said the proceeds from the IPO will be used primarily to pay down the company’s debt — $2.19 billion as of Sept. 30. AMC also plans to invest in theater upgrades, adding more upscale elements to its venues with in-theater dinning options, similar to its recently opened location in Marina Del Ray, Calif., where patrons can order food and drinks, including beer and wine, while sitting in reclining leather seats.

The strategy could be viewed as AMC’s attempt to lure more patrons to the theater and away from watching movies in the comfort of their homes. However, the strategy isn’t so much a way to increase ticket sales as it is to get already hooked movie goers to spend more, says Adriana Lozado, senior analyst at Privco Media, a New York-based research firm that tracks privately held companies. AMC is also planning to install bigger and comfier seats, which also means fewer seats in each theater. “It’s a pretty bold move,” Lozado says.

Before Wednesday’s IPO, AMC had made several attempts to reenter the public market after going private in 2004. It filed for a $750 million IPO in 2006 as investors looked to recoup some of their investments in the company. But AMC withdrew that offering after investors balked at the $17-a-share asking price. The company tried again in September 2007 with a scaled-back stock offering, but withdrew the plan that year as the financial crisis unraveled. And in 2012, the chain put aside plans for an IPO before Wanda, China’s largest entertainment group, agreed to buy AMC for $2.6 billion.

Indeed, it has been a struggle at AMC. And while investors seem optimistic, it’s far from clear if moviegoers will buy into its new approach.