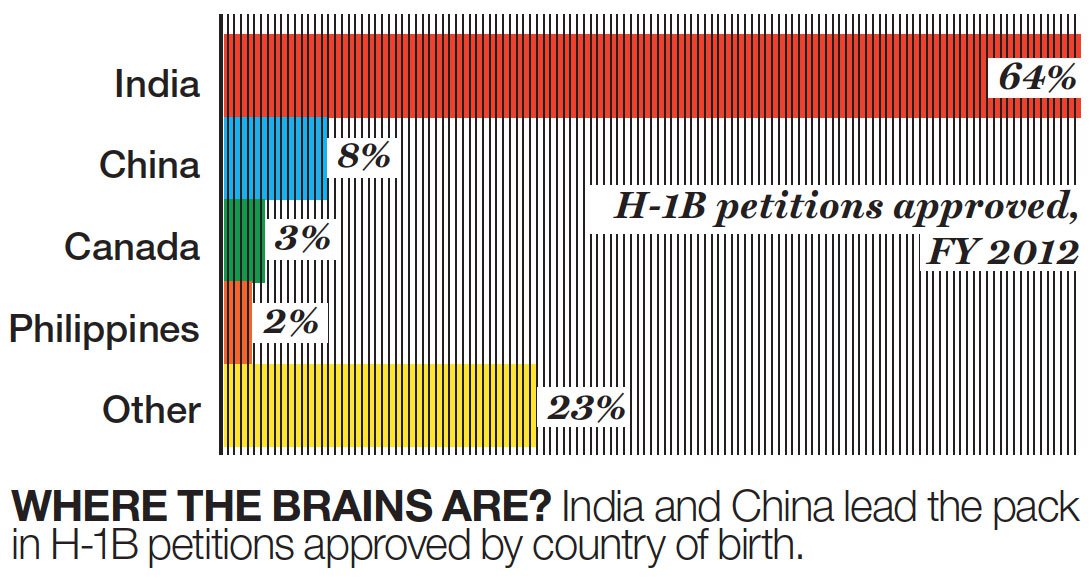 Those looking to assign blame for income inequality in the U.S. have no shortage of institutions to cast as villains. The left’s perennial bad guy is Wal-Mart, most recently targeted by union leaders demanding that its new Washington, D.C., box stores pay 50% above the minimum wage (labor lost that battle). On the political right the culprit is often the Latino illegal immigrant, who stands accused of taking Americans’ jobs and keeping wages low by working off the books. And just about everyone cringes at CEO salaries that average 273 times that of their employees.

The policy prescriptions are just as familiar as the villains’ names: Raise wages at the bottom. Raise taxes at the top. To those old debates, Alan Greenspan offers up a provocative new idea: Let firms recruit as many brainy foreign employees to American soil as they want. In other words, instead of raising the cap on specialty green cards and H-1B visas, as the Senate-passed immigration bill does, drop the limits altogether.

The result? The former Fed chair argues that the subsequent crush of high-skilled foreign talent would squeeze salaries at the top. (That’s probably you, Fortune reader.) “They’d be competing for jobs against us — the well educated and high skilled,” he says. “Including me. I don’t know how many economists, but there would be some [foreign hires].” And there would be a bonus for lower-income workers: This infusion of talent would boost economic growth — and more jobs.

The demand for H-1B visas is huge and growing. Within days visas for 65,000, plus 20,000 advanced-degree holders, are filled each year, even with a regulatory stipulation that they can be granted only for jobs “so specialized and complex that the knowledge required to perform the duties is usually associated with the attainment of a bachelor’s or higher degree.” (Companies have to attest that none of their U.S. employees will be displaced, but they don’t have to prove that no other Americans are available.)

Loads of those visa applications come on behalf of foreign graduates and postgraduates from U.S. universities who otherwise will take their degrees home to compete against American firms. Last year a record 800,000 foreign students attended U.S. universities, and many study science or business. If the gates were open to more of those students, “they’d force prices and income down in the upper-income groups,” Greenspan tells me. “Not by a large amount, but it would be measurable.”

I’ve argued here that giving U.S. companies more leeway to hire foreigners reduces their incentive to invest in the skills and education of the American workforce. If Microsoft can pull all the employees it wants out from the Indians and Chinese and Brazilians populating Ivy League corridors, why bother investing in U.S. schools?

Greenspan, author of the new book The Map and the Territory, counters that there is no cause and effect on this score. Indeed, even with lower H-1B caps in place, the U.S. education system has stalled. A troubling OECD report released in November showed our 15-year-olds stuck far behind students in other developed countries in math, science, and reading. Despite outspending almost every other country, the U.S. came in 26th (out of 34 countries) in math and 21st in science. “Companies would love to train them, but the students who come out of American high schools are much lower quality than they used to be,” says Greenspan.

America’s widening income gap is the result of a complex stew of globalization, people-replacing technologies, and slowing educational attainment from the middle class on down. Toss into that stew other ingredients — like the huge salary premium granted to college grads, and the fact that a growing majority of low-income kids are born to single mothers and will struggle more. Greenspan’s idea can’t reverse any of that. But it does serve as a reminder that after 30 years of a widening income gap, we should consider thinking outside the usual boxes.