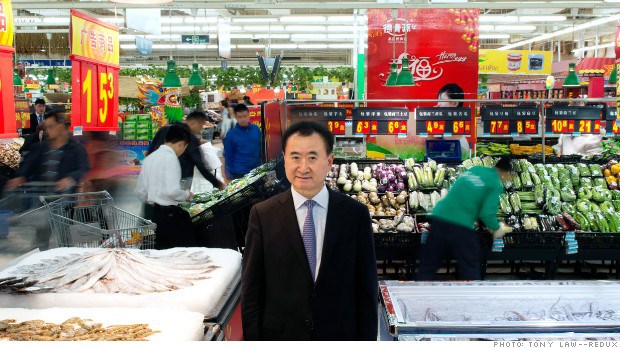 Photo by Stefen Chow for Fortune

Is it possible to become the richest man in China and not be corrupt? I’ve been thinking about that ever since I profiled Chinese billionaire Wang Jianlin last spring.

Wang has been in the news a lot since then. In June he bought British yacht maker Sunseeker for $500 million; and invested $1.1 billion in a planned luxury hotel in London—part of his stated ambition, as he once told me, to “put our iconic buildings in the major cities across the whole world.” In September he announced plans to spend $8.7 billion on what he says will be the world’s biggest TV and film production studio, Qingdao Oriental Movie Metropolis; that should dovetail nicely with his $2.6 billion purchase last year of theater chain AMC. In November he bought a Picasso painting, Claude et Paloma, at auction for $28.2 million, more than twice what Christie’s thought it would sell for. Meanwhile, in Bloomberg’s estimation, he has gone from the second richest man in China, to the first, to the third, while his net worth has risen nearly 50%, to around $12 billion.

All of which could have been buried under a far less flattering set of headlines. In November the The New York Times revealed that Bloomberg editors in New York, perhaps fearful of offending China, had quashed a major investigative piece examining ties between China’s business and political elite. The Times didn’t say what Bloomberg had, but according to the Financial Times, “Several people familiar with the story said it focused on Wang Jianlin.”

I have no evidence that Wang engaged in corrupt behavior at any point during his rise from a modest boyhood in rural Sichuan Province, through the ranks in the People’s Liberation Army, to the chairmanship of Wanda Group and control of the biggest commercial real estate empire in China.

As I noted in my story, however, “Every Wanda project starts with land, and all the land in China belongs to the government, meaning Wanda can’t get to step one without the consent of bureaucrats, many of whom expect bribes for their cooperation on business deals.” I also pointed out that Wang got his start in business in the coastal city of Dalian during the 1990s, when the mayor, and later provincial governor, was Bo Xilai. Bo was found guilty of corruption earlier this year and sentenced to life in prison.

Wang told me that he’d been on guard against corruption since he started his business, in the practical belief that bribing government officials was not a good long-term strategy for success. He told me about the financial controls he put in place. For instance, there’s no such thing as petty cash at Wanda; every expenditure has a paper trail.

The most persuasive case he made, in my view, is that at this stage of its development (if not necessarily when the company was new), Wanda has no motive to grease anyone’s palms. That’s because Wanda doesn’t pitch projects anymore. Instead it fields far more requests than it could ever handle from municipalities that want what only Wanda can deliver—large scale, no-hassle, image-buffing, tax-revenue-producing urban redevelopment, completed on time and on budget. Wanda is in the driver’s seat, not the government officials. “They come to me,” Wang said, “asking us to invest, to work with them, to help them. So how can I bribe them? There’s no chance I can bribe them.”

Corruption, of course, has many faces. Wanda may well be squeaky clean when it comes to bribing public servants, and something else entirely when it comes to paying true market value for real estate. Such was the strong implication in a recent report published in Guangzhou’s 21st Century Business Herald, and summarized in Taiwan’s Want China Times. The Herald identified three cases in which Wanda was forced by local authorities to submit new, higher bids on land it had already purchased. According to the Times, “The three land repurchases had one thing in common: Wanda had secured an agreement with local governments ahead of the purchases to allow the company to buy the plots of land at rock-bottom prices. The Ministry of Land and Resources detected the irregularities however and ordered a halt to the monopolistic activities, according to Guangdong’s Department of Land and Resources.”

Again, to be clear: As far as I know, Wanda Group has never broken any laws. But this, too, is clear. Given Wang’s obsession for sweating the details, his instance on strict centralized control of every facet of his empire, if Wanda Group is ever found to have crossed the line, we’ll know who to blame. Wang understands that. “If someone bribe,” he told me, “they will never say, ‘That’s the guy.’ They will always say, ‘That’s Chairman Wang’s problem.’”