Venture capital will thrive even if tech IPOs don’t 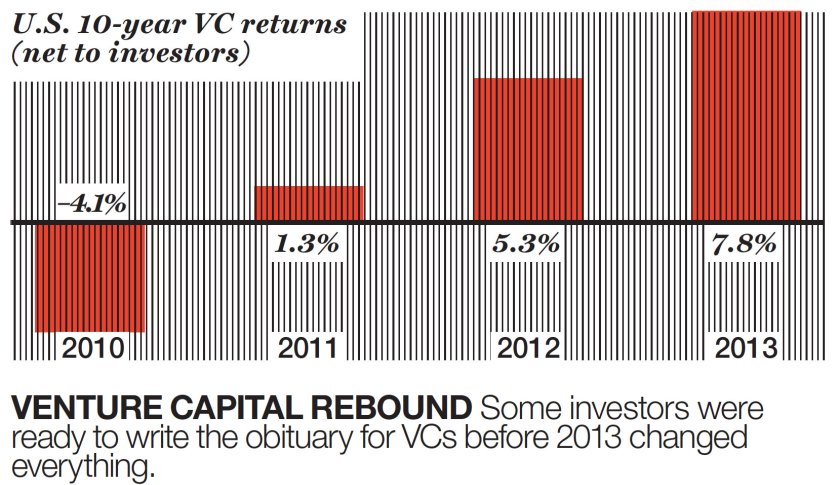 Here are two basic facts about business cycles: (1) They exist, and (2) people often dispute that, particularly in the midst of a prolonged top or bottom. So it has been for venture capital since the dotcom bubble burst more than a decade ago, with even industry insiders adopting defeatist language about their “broken model.” The worst came in 2010 when median 10-year performance turned negative and a slew of longtime institutional investors began to abandon all but a small handful of VC firms. If venture capital had always been a cottage industry, it had become that cottage’s supply closet.

In 2013, however, the negative narrative flipped with ferocious speed: more IPOs, rising returns, and broad-based success that included, but was not defined by, Bay Area Internet companies. The turnaround knocked nonbelievers upside the head with giant bags of money and will help enable the next great wave of innovation. Even if tech valuations sag or the stock markets sink, venture capitalists will have full wallets. By proving the cycle, 2013 has created something sustainable for 2014 and beyond.

Venture capital isn’t required to start a business, but precious few companies are able to scale successfully without it — something that even the most critical entrepreneurs seem to recognize. It’s the difference between building an app that Twitter buys after eight months and actually building the next Twitter (which raised more than $600 million from over a dozen firms).

For quite some time, though, widespread access to that money and advice appeared threatened. Fewer and fewer firms were able to raise new funds, and most of them looked remarkably similar to one another. That may have been okay for a small subset of well-networked entrepreneurs within the “right” geography and discipline, but many more would be left out.

That’s where 2013 came in. The headline was the high volume of IPOs, but the underlying story was the breadth of issuers and investors. For example, more than 40% of the year’s offerings came from life sciences companies (a practice area that many generalist VC firms had begun to either deemphasize or eliminate altogether). Commerce also rebounded, for both digital issuers like Zulily (a Seattle-based flash-sale site for moms) and physical ones like Potbelly (a Chicago-based sandwich-shop chain). Also note the geographic diversity, which was buttressed by more traditional plays like San Francisco-based Twitter.

And the more diversity in industry and geography, the greater number of VC firms that are typically involved. This is reflected in performance data from Cambridge Associates, which showed significant improvement in median returns between June 30, 2012, and June 30, 2013, for one-year internal rates of return (up 48%). Five-year (up 17%) and 10-year (48%) rates also rose sharply. That means more and more firms should be able to raise new funds, thus expanding the pool of funding sources for entrepreneurs.

Unfortunately, institutional investors such as university endowments and public pensions don’t seem to be playing along. A recent survey by Coller Capital shows that while these groups have become more optimistic about future performance — two-thirds expect annual returns for North American VC to top 11% — a majority still plans to decrease VC fund exposure over the next several years. A similar survey from Probitas Partners showed a record 43% of respondents saying that they no longer invest in VC funds at all.

I expect the spigots to loosen. It took institutional investors a while to wean off of venture capital after the dotcom crash, and a similar lag may be occurring here (albeit in the other direction). All these folks can read the data. Now what they need to do is realize that it signifies the existence of a VC cycle rather than an uptick on the descent toward oblivion. Entrepreneurs are counting on this epiphany.