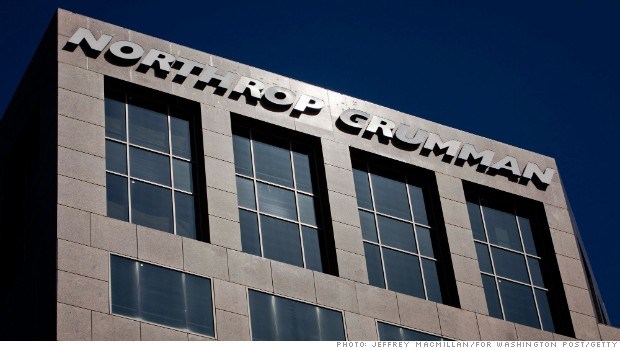 Earlier this month, aerospace industry trade publication Aviation Week pulled back the curtain on a new U.S. Air Force aircraft flying the skies above the airborne service’s Groom Lake test and training range — the installation known in popular lore as “Area 51.” Piecing together anecdotal evidence, known gaps in the Air Force’s existing capability spectrum, financial disclosures, and satellite imagery, Aviation Week’s reporters revealed that the Air Force is testing a new classified, long-range, radar-evading spy drone, one that it plans to field in undisclosed but significant numbers as soon as 2015.

The unveiling of the so-called RQ-180 also provided an interesting detail on a recent major USAF procurement program: This new piece of stealthy, unmanned military hardware was developed by Northrop Grumman (NOC), the same contractor that notched a major milestone this summer by landing its unmanned and autonomous X-47B combat jet on the deck of an aircraft carrier. Following a design competition that reportedly included aeronautics rivals Boeing (BA) and Lockheed Martin (LMT), we now know that Northrop Grumman walked away with yet another contract to build a next-generation unmanned aerial system for the Department of Defense — something that’s becoming old hat for the Falls Creek, Va.,-based defense contractor.

“They’re extremely strong, they’ve got the strongest position in the market,” says Phil Finnegan, director of corporate analysis at Fairfax, Va.,-based aerospace and defense consultancy Teal Group. “They have a broad array of programs ranging from stealthy UAVs to those that dominate the high-altitude, long-endurance market. So they have strength both in terms of technology and in terms of sales. That said, in spite of that strength it does remain a competitive market.”

It’s an interesting time to be in the UAS industry, particularly where military UAS are concerned. Despite all the high-profile media attention paid to the CIA’s controversial drone strikes in places like Pakistan and Yemen and the fundamentally new kind of warfare they enable, those in the industry believe that unmanned systems — and in particular unmanned aerial systems — have only just begun to transform the aerospace and defense sectors. The military UAS industry remains in its infancy, and everyone from aerospace powerhouses like Boeing and Lockheed Martin to lesser-known names like General Atomics — maker of the now-iconic Predator and Reaper drones currently deployed around the globe — is vying for position.

It’s against this backdrop that Northrop Grumman is quietly carving out a niche as the industry standard-bearer for technologically sophisticated, often autonomous, and increasingly stealthy unmanned aerial systems. While the DoD’s current fleet of Predator and Reaper drones are extremely effective in permissive environments like Iraq and Afghanistan where no established militarized air force is actively trying to shoot them down, they have virtually no ability to defend themselves from even rudimentary modern air defenses. For future conflicts the Pentagon wants drones that can operate in “contested” or “denied” airspace, and that means stealth — the right combination of speed, low-observable shape, electronic jamming equipment, and other classified tools that frustrate enemy air defenses.

Northrop Grumman’s RQ-180 is that drone. Paid for via the Air Force’s classified budget, it will offer the military something it hasn’t had since the retirement of the high-flying Lockheed-built SR-71 “Blackbird” in 1998: The ability to penetrate and overfly well-defended airspace to conduct intelligence, surveillance, and reconnaissance (ISR) missions with impunity. Financial disclosures by Northrop Grumman indicate that the Air Force paid it $2 billion for that privilege back in 2008 when the contract was initiated, and the AvWeek exposé notes that further financial reports filed this year suggest the program has entered low-rate production- – an indicator that low-volume deliveries are already underway in preparation for the full-scale production that will commence once testing is finished.

The RQ-180 joins several DoD drone development programs already underway via Northrop Grumman. Northrop Grumman makes the RQ-4 Global Hawk, a massive high-altitude, long-endurance ISR drone also operated by the Air Force. The Navy’s new Fire Scout unmanned helicopter comes from Northrop Grumman as well, as does the MQ-4C Triton, an updated and maritime-optimized version of the Global Hawk that can stay aloft for 24 hours straight while observing 2 million square miles of ocean with its state-of-the-art sensor package (the Navy is in the process of procuring nearly 70 Triton aircraft from Northrop Grumman).

Then there’s the much more famous X-47B, the carrier-capable unmanned fighter jet that Northrop Grumman built for the Navy, beating out Boeing for the privilege (as well as a contract totaling nearly $1 billion). Only two X-47B aircraft exist; it was designed as a demonstrator to prove out technologies necessary for integrating UAS into existing aircraft carrier operations. Yet another major contract — under the Navy’s Unmanned Carrier Launched Airborne Surveillance and Strike program (UCLASS) — will be up for grabs starting in 2015, this time for the development of an actual unmanned fleet aircraft for the Navy (neither the requirements for that aircraft nor the total number the Navy eventually wants has been released yet). Boeing, Lockheed Martin, and General Atomics are all expected to compete for that program, but given its work on the X-47B Northrop is well-positioned to win that contract.

That doesn’t mean Northrop Grumman has a lock in the military UAS industry. Rather, by leading the industry in a number of areas it is helping to define a field that is as-yet undefined. Northrop has emerged as a leader at the high end of the technological spectrum, proving that it can deliver fast and stealthy unmanned aircraft with a variety of bells and whistles attractive to military brass. But as the Pentagon’s airborne priorities shift that ability could prove both help and hindrance — especially as aircraft requirements are increasingly dictated by cost. Consider the UCLASS program, for which the Navy has yet to release a set of definitive specifications or aircraft requirements.

“Lockheed Martin and Boeing have a lot to bring to the market, and if you look at UCLASS, that’s going to be a tight competition,” Finnegan says. “Depending on where the requirements fall, if it’s at the low end that favors General Atomics. If it’s at the high-end — the most technologically advanced aircraft that can provide the highest degree of stealth — Northrop would be there as well as Lockheed Martin. Boeing is somewhere in the middle, not because they have less experience but because they have a design that’s based more on affordability rather than being the most technologically demanding.”

Moreover, if the Air Force’s new RQ-180 is as stealthy and effective as Northrop Grumman is capable of making it, some have speculated that it could hurt the company’s chances of winning the UCLASS contract. After all, if the Air Force already has a stealthy ISR aircraft capable of penetrating contested airspace — one of the original broad mission requirements for the UCLASS aircraft — the Navy might decide to trim some cost from its own program by reducing the stealth requirements for UCLASS, robbing Northrop Grumman of its edge.

The collective needs of an increasingly thrifty Pentagon will ultimately decide the winners and losers in the military drone market going forward, regardless of which company can produce the sexiest piece of hardware. But as long as the DoD remains fixated on stepping up the stealthiness and technological sophistication of its drone fleet, Northrop Grumman is well-positioned to further extend its winning streak.

“They are facing tough competition,” Finnegan says of Northrop Grumman. “But clearly they’ve pulled out in front.”