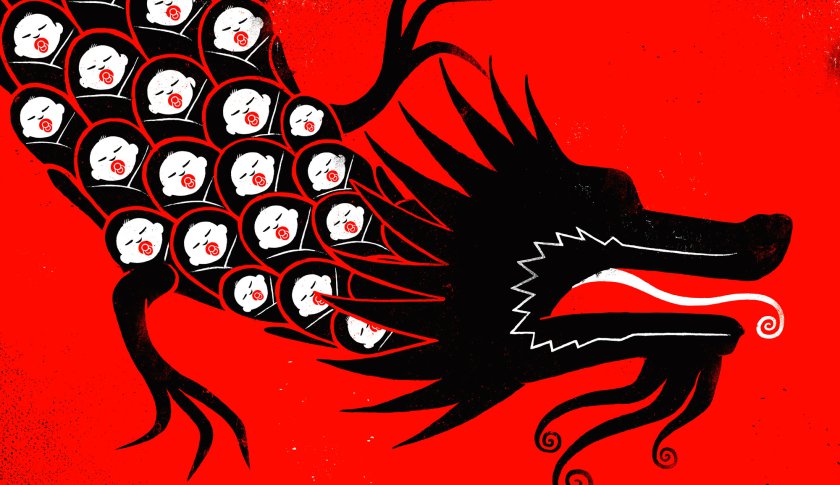 On a recent Saturday, Larry Kung, the co-founder of Leyou, a Chinese baby retailer that sells everything from imported infant milk formula to Chinese-made Huggies, made a surprise visit to his store in Beijing’s newest mall, Aegean. Kung has spent the past two weeks tallying the estimates of expected new babies in China after the government announced the monumental step of relaxing its one-child policy. Best Kung can tell, China should deliver at least 1 million more babies a year, total. The boom for Kung will begin right here in the maternity section. He gestured toward a line of anti-radiation clothing.

Inside otherwise normal-looking blouses and dresses is a blended silver weave that supposedly prevents electromagnetic radiation from entering the womb. The clothes are some of the most popular products among new and soon-to-be mothers; the dresses cost $100. Kung asks a saleswoman if there’s been a surge of buyers. Not yet, she says, adding that this item only sells after a couple months of pregnancy. She and her colleagues have been doing a bit of their own unscientific research, asking shoppers who arrive with a child whether they’re planning to have second. She proudly tells her boss, “They say, they are considering!”

When China’s state-mandated family planning began, in 1979, it was an effort to control the swelling population of a still poor nation — the country’s GDP was just 3% what it is today. But one-child worked too well and has wrought a gender imbalance (about 117 boys for every 100 girls) as well as an elderly population that rivals Japan’s in percentages and costs. (By 2050, more than a third of the populations in both will be elderly.)

Over the next few years, the one-child change will be a boom time for businesses like Kung’s. Lu Ting, a China economist at Bank of America Merrill Lynch, expects pent-up demand for second children to yield 9.5 million additional babies over the next five years. On the Monday following the policy change in mid-November, shares of stroller makers and dairy product companies jumped by double-digit percentages. Joie International, a U.K. stroller maker, says the Chinese retailers that sell its wares are gearing up for a big 2014.

Unfortunately for these businesses, the trend of more babies doesn’t look permanent. Most forecasts only account for an increase in births over the next five years. After that, as China gets richer, birth rates are likely to continue falling, says Ted Fishman, author of China, Inc. “I think it’s interesting they pick the one policy that will make little difference,” he says. Just look to South Korea, where family planning ran for more than 25 years with slogans like “Even two were too many.” After finally abolishing the program in 1996, Korea’s fertility rate continued its four-decade trend — downward. It’s the same picture in Hong Kong, Singapore, Thailand, and Malaysia.

A similar outcome looks likely for China. The UN estimates China’s population aged 64 and under will fall dramatically over the next 20 years because of lower birth rates. Wealthier countries simply have fewer kids. Still, China has some of the world’s most enviable demographics compared to the developed world. As Fishman points out, there are more Chinese under 14 than there are people in the U.S.

There’s even an actual upside if China’s birth rate continues falling. “You get more and more resources pushed into children and education, and productivity will go up enormously as a result” Fishman predicts. “So China remains competitive no matter which scenario plays out.”

China doesn’t have a worker shortage problem that needs to be fixed by changing to one-child, as some critics argue. Its workers just want to be paid more, something that’s inevitable as a society becomes rapidly wealthier. Over the past 30 years, China has competed globally with its huge pool of cheap labor. As it transitions to a service economy, it will strive to compete globally with intellectual capital.

Back in the Aegean mall, Kung has just finished rearranging a front display of Snoopy sweaters. As he’s leaving the store, a young couple walks down an aisle. The woman is rubbing her belly. They have just finished looking at radiation blouses.

A shorter version of this story appeared in the January 13, 2014 issue of Fortune.