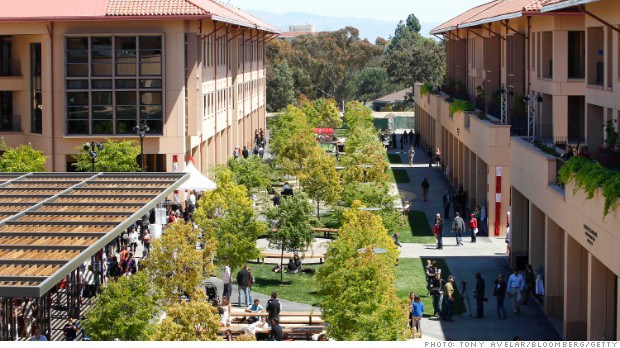 (Poets&Quants) — He has an undergraduate degree in finance from Wharton, two years of experience at both L.E.K. Consulting and Barclays. With a 740 GMAT and a grade point average of 3.45, this Indian-American is not only a scratch golfer, he also climbed Mount Everest. Yet he was rejected last week by both Harvard Business School and Stanford Graduate School of Business.

She’s a 27-year-old woman who has successfully founded two startups, attracting both funding and major media attention. With a 760 GMAT and a 3.5 GPA at a “Baby Ivy,” she was even named to a list of the 30 best entrepreneurs under the age of 30 by an international magazine. Yet she was dinged by Stanford last week.

This 26-year-old is a biomedical engineer for Abbott Laboratories who has been promoted twice and won recognition from his site leadership team. His 790 GMAT is more than 60 points higher than the average score for the latest enrolled class at Harvard Business School. Yet Harvard just turned him down for admission to its MBA program.

These MBA candidates were all round one applicants who were dinged by either Harvard, Stanford, or both business schools last week. Yet they have impressive GMAT scores along with professional and extracurricular achievements that are nothing less than exceptional. So why didn’t they get in?

We asked Sandy Kreisberg, founder of HBSGuru.com and a prominent MBA admissions consultant, to take a look at the profiles and raw stats of rejected candidates and tell them why they failed to get into Harvard or Stanford. Both business schools released their round one decisions last week and thousands of applicants got disappointing news.

Of course, it’s no small hurdle to get into either Harvard or Stanford. The average GMAT score for latest class enrolled at HBS is 727, while the average at Stanford is 732. The undergraduate grade point averages are in nose bleed territory as well: 3.73 at Stanford and 3.67 at Harvard. Less than 7% of Stanford applicants and less than 12% of HBS applicants are accepted each year.

Sandy’s Analysis: No surprise here. Climbing Mount Everest (and scratch golf) could turn gold minus into gold but not silver into gold, and what we have here is solid silver [a lowish GPA, a work history at LEK and Barclays, all solid but not a 3.9, with experience at McKinsey and Goldman (GS) or KKR (KKR). There was nothing really driving you in.

People refuse to acknowledge the truth because they don’t want to be completely honest about how unfair admissions can be. But college is destiny. If you had gone to Princeton instead of Penn, you probably would have worked for McKinsey instead of L.E.K. and then would have made a move to Goldman or Morgan Stanley instead of Barclays. You then would have been accepted at Harvard and Stanford. Instead, you might very well be going back to Wharton.

Dinged At Stanford:
• 760 GMAT
• 3.5 GPA
• Undergraduate degree in biology and English from a ‘Baby Ivy” east coast private college
• Work experience includes five years across two startups, with funding and major media, as head of marketing and operations; five years of international work experience; founder of my own company which was successfully acquired; led teams of up to 15
• Was named to list of 30 under 30 in tech in an international magazine and have won awards from two industry-leading corporations
• Extracurricular involvement includes youth volunteer work and programs engaging women in science and tech
• Goal: To run a startup accelerator with a focus on helping companies with international ambitions
• 27-year-old female
• What she says about the rejection: “Honestly, I’m at a loss. Even students and faculty thought I’d be a shoo-in. My guess would be GPA and unknown companies? As a side note, I’ve noticed GSB has an awful track record for women in tech matriculating.”

Sandy’s Analysis: Oh boy, light my fire! If there is any chance at all of piling on and accusing Stanford B-school of hypocrisy, well, I am ready, willing, and have done so many times in the past.

I believe you were rejected because of your lowish grades. A 3.5 in an era of grad inflation is well below the current 3.73 average at Stanford. And I would bet that your company was not cool enough for Stanford or world-changing enough.

Despite all the public BS about how much Harvard and Stanford love startups, if you had said you wanted to start Rent The Runway or even Snapchat in your admissions essay, that would have been a negative, especially if you had no startup experience. Schools are suspicious of startups because any moron can do one and many have.

Dinged at Harvard (no interview):
• 790 GMAT
• 3.15 GPA
• Undergraduate degree in biomedical engineering from Rutgers University
• Work experience includes four years at Abbott Labs – worked in manufacturing dept. as an engineer, involved in development/launch of new medical device, promoted twice, received recognition from Site Leadership Team
• Goal: To combine technical engineering skills gained over the last four years at Abbott with financial education and become a top executive at Abbott Labs
• 26-year-old male
• What he says: “I suspect the low GPA for the rejection? Is there any hope for me to get into a top five school with that ugly thing? Also, I’ve read in your columns that business schools love bio-pharma types. Does the stardust also apply to the medical device industry? I’m wondering if transitioning to bio-pharma would help my chances at all.”

Sandy’s Analysis: Not sure what happened. A 790 GMAT is an eye-catcher and Abbott Labs is something, well, I have heard of. Medical devices is what your major was, and that is about as good a major as exists in God’s man-made world. You should have done a convincing job of saying you wanted to be an innovative, value-adding, poor-people-serving leader. Saying you wanted to be CEO of Abbott Labs (ABT) showed a, ahem, lack of imagination and, in context, was generic. Not sure if that actually damaged you. It depends on how you did it.

If your essay sounded over generalized and recommendations were not curated properly (some of those med device lab guys are not experienced writers) and then if we start focusing on the low GPA and Rutgers — not a favorite HBS school, probably not Springsteen enough — then you probably lost them at that point.

Drop by drop, all the small stuff can add up, especially if the small stuff begins to form a negative picture. At that point, the 790 GMAT actually starts working against you. They begin to suspect you are a brainiac with limited social skills. Just speculating here. If I came across your application cold, I would have said your odds were 40-50%, given your 790 GMAT and work experience at Abbott. I would have predicted an interview.

More from Poets&Quants:
• More Harvard & Stanford MBA Applicant Rejection Stories
• How To Get An Elite MBA For Free — The MOOC Revolution
• The Definitive Ranking: Top 100 MBA Programs In The U.S.