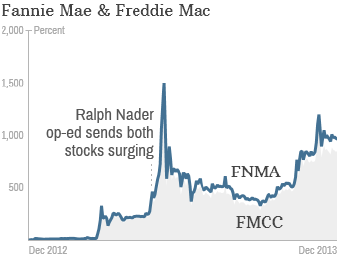 It’s no secret that U.S. stocks had a great year in 2013. The S&P 500 gained more than 22% through mid-December, building on its 13% rise in 2012. Fortune 500 companies were no exception, with 86% enjoying share price increases, compared with less than 80% last year. And while two solid years in a row isn’t exactly a comeback story, several of 2013’s surprise best performers, who posted dazzlingly high returns after being down-and-out a year ago are. Indeed, the Fortune 500’s top 20 performing stocks doubled their share prices. And the big winners? Fannie Mae and Freddie Mac, penny stocks a year ago, returned nearly 1000% as they repaid their government bailouts. The rest of the top 10 run the gamut from health care to casinos. Click through the countdown of the best Fortune 500 stocks of 2013, based on their closing prices Dec. 6. –Jen Wieczner

Printing company R.R. Donnelley (RRD) has produced important documents and financial filings for large corporations for almost 150 years. But demand for its printing services has declined along with snail mail, as documents have gone digital. And the Chicago-based firm took another hit in late 2012 after fessing up to accidentally releasing Google's earnings statement early, a high-profile blunder. The company, however, beat earnings estimates for three straight quarters in 2013, while continuing to pay dividends. In October, Chicago-based R.R. Donnelley announced it would acquire a smaller competitor, Consolidated Graphics, for about $620 million. The deal is expected to close in the first quarter of 2014. --J.W.

After years of turbulence, it appears Delta Air Lines (DAL) is flying more smoothly than ever. The airline acquired a 49% stake in Britain's No. 2 airline carrier, Virgin Atlantic Airways, in June. The airline's inclusion in the S&P 500 after an 8-year absence helped its stock to rise by 15%. Delta outperformed all major U.S. airline carriers, more than doubling its share price this year. For the first time in a decade, Delta paid a dividend while also launching a share buyback program of $500 million to boost shareholder returns. 2014 could be an even bigger year for Delta, with revenue expected to hit nearly $40 billion. The airline will also launch seven new nonstop flights between Seattle and Las Vegas and Los Angeles. --Brandon Southward

Even with continued weak revenue, Supervalu (SVU) saw its earnings rise significantly in the first quarter of 2013. The earnings were helped by its selling of five grocery chains, including Albertsons, to Cerberus Capital Management LP in January 2013 for about $3.3 billion. The company recorded a profit of $40 million in the second quarter compared to a loss of $111 million in the same quarter the year before. Supervalu significantly refocused on its traditional and regional grocery chains, including reinvesting in Save-A-Lot in an attempt to gain ground on Wal-Mart (WMT) and Target (TGT). --B.S.

2013 appeared to be the year Caesars Entertainment (CZR) finally began to tackle what CEO Gary Loveman called "a complicated capital structure" -- and the markets took notice. The company raised around $200 million in cash through a public equity offering, the largest since its 2012 IPO, and revenues increased by $47.8 million in the third quarter compared to 2012. New revenues in Las Vegas increased by $38.4 million, a 5.2 percent jump in the third quarter of 2013, due to increases in casinos, rooms, and food and beverage revenues. Despite the growth, analysts have stressed that the long-term debt of the company is a significant roadblock to Caesars' long-term stability. --B.S.

It seems it pays to be active. Icahn Enterprises' (IEP) stock is up more than 202 percent since last year, which is undoubtedly bolstered by the company's stakes in Netflix (NFLX), Herbalife (HLF), Apple (AAPL) and Chesapeake Energy (CHK). From April 2009 to October 2013, investment in the company's stock has yielded an annual return of 39%. In December Icahn Enterprises announced it was selling 2,000,000 depositary units for limited partnerships in the company. The deal is expected to produce $289 million, which will be used toward investments in some of Icahn's subsidiaries. --B.S.

Boise-based Micron (MU) is focused on designing and building memory and semiconductor technology. The company has seen a major surge in its stock, rising 61% since August. Revenues from the sales of their DRAM product increased by 50 percent in the fourth quarter of fiscal 2013 over the third quarter. Analysts believe this increase resulted from a rising chip shortage and the company's purchase of Japanese chipmaker Elpida Memory in July. The company ended the fourth quarter with cash and investments totaling $4.2 billion. Analysts are expecting Micron Technology to continue its upward trajectory in 2014. --B.S.

Best Buy (BBY) had a rough 2012, with founder Richard Schulze offering to buy the electronics retailer and take it private. Shares sank further on the appointment of Hubert Joly as the new CEO in the summer of that year, but so far Joly and his turnaround strategy have impressed investors. While some worried that online shoppers would put Best Buy out of business, the store instituted a price-matching policy, and seems to be striking a balance between competing with its rival retailers' discounts while preserving profit. Third-quarter earnings for the Minneapolis-based company, with $9.4 billion revenue, beat expectations. Shoppers were also pleased with Best Buy's new smartphone trade-in promotions, offering $100 off an iPhone 5S or 5C in exchange for an older (but functioning) phone. Indeed, analysts expect that the holiday shopping season might even bring Best Buy a gift of greater market share, though it will have to fight to hold on to it in 2014.--J.W.

The third largest drugstore chain in the U.S. has lagged behind its bigger competitors CVS (CVS) (No. 13 in the Fortune 500) and Walgreen (WAG) (No. 37), for years. But Rite Aid (RAD)posted its first annual profit since 2007 this year, and its "performance has been slowly improving," says Adam J. Fein, president of Pembroke Consulting, which specializes in pharmaceutical industry strategy, and president of Drug Channels Institute. Today, Rite Aid shares are trading higher than they have in more than five years. The pharmacy operator is hoping for a further boost from the Affordable Care Act, as it gains newly insured customers and offers additional services such as insurance enrollment counseling. Still, the company may have lost some ground to CVS and Walgreen, who have formed new lucrative partnerships with major drug distributors, giving them greater purchasing power of generic pharmaceuticals, analysts say. Rite Aid also has "many sub-par locations" and $6 billion in debt, Fein says. But Rite Aid is no longer seen as an acquisition target for its rivals as it was a few years ago, and Fein expects it could enter an agreement with a large drug distributor like McKesson, of which it is a major customer.--J.W.

Poster children of the 2008 financial crisis, mortgage lenders Fannie Mae (FNMA) and Freddie Mac (FMCC) were anything but hot stocks after receiving a more than $187 billion government bailout during the economic collapse. But after swinging back to solid profits in 2012, following billions of dollars in 2011 losses, Fannie and Freddie paid off most of their debt to the U.S. Treasury in 2013. By the end of the year, the tab will be nearly settled, with only Fannie still owing about $2.2 billion—a target well within reach in the first quarter of 2014. Now, investors are starting to look seriously again at Fannie and Freddie, whose stocks were dropped from the New York Stock Exchange in 2010 and were only worth about a quarter each at the end of 2012. Famed hedge fund investor Bill Ackman, for one, recently bought stakes of nearly 10% in each mortgage giant. Upon the November announcement, the shares surged and were up more than 1000% since the beginning of the year. --J.W.