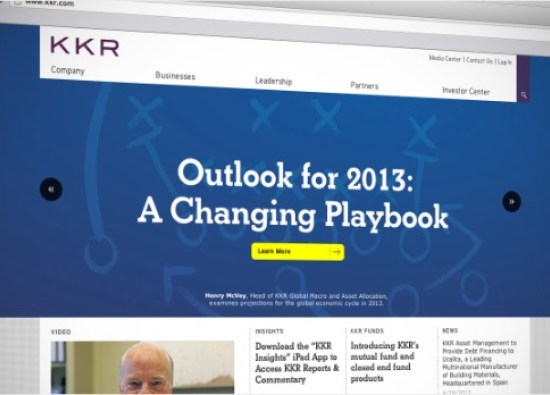 Buyout firms appear to be running out of things to buy out. And so they are buying themselves.

Late on Monday KKR & Co. (KKR) announced it was acquiring KKR Financial Holdings (KFN). KFN is technically a separate company, a bond fund manager that is publicly traded, but it’s really just a division of the giant private equity firm. KFN’s CEO is a KKR employee, as are a number of KFN’s board members. All of KFN’s investing decisions are made by KKR.

Nonetheless, KKR is paying a premium for a company. KFN’s stock was trading at $9 before the announced deal. The deal valued the bond manager at $12.79. Put another way, KKR is paying $2.6 billion to buy KFN’s $2.2 billion in bonds.

It’s not clear why. Fortune contributor Cyrus Sanati says that KFN’s holdings are mostly made up of floating rate bonds, and if interest rates go up next year, floating rate bonds will be worth more than bonds with fixed lower yields. KKR may be paying a premium to make a bet on interest rates. Bloomberg’s Matt Levine says KKR decided to pay more than it had to to avoid getting sued, because of the appearance of self-dealing. That strategy might not have worked. Law firms who sue on behalf of shareholders have already said they are investigating.

Here’s another reason to consider: The buyout world is in a bubble.

KKR says KFN will provide cash flow for the buyout firm. You would overpay for that cash flow if you believe you will make even more money pumping those funds into buyouts. The other reason you would pay more to get into the bond fund management business if you believe now is the time to diversify away from buyouts, and buying a linked but technically separate business could be the easiest way to do that. So it’s possible that KKR may be overly optimistic about the returns they will get from buyouts. But it’s equally possible that KKR believes that the returns from buyouts won’t be as good as they have been. Both scenarios point to a bubble in the buyout business.

So far in 2013, private equity firms have generated 23% of all investment banking fees. That’s a record. Back in 2000, it was 7%. Some people say that that has to do with a lack of M&A deals being done by regular companies. When corporate buyers start making acquisitions again, private equity’s share of deals will drop. It could also drop if private equity firms simply do fewer deals.