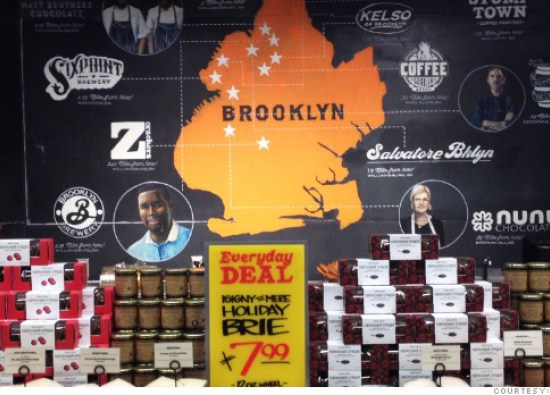 The big question for Whole Foods Market (WFM) when it opens its first store in Brooklyn this morning — what took so long?

As the largest retailer of natural and organic foods, the Austin-based supermarket chain would seem like a natural fit for Brooklyn, the borough that has become famous for community gardens and home brewing.

But the 56,000-square-foot store in Gowanus has been 10 years in the making, delayed by remediation to what was formerly an industrial site and local opposition over how a Whole Foods would impact the character of the neighborhood. While there’s a desire for natural and organic foods in the borough, there’s also an aversion to chain stores.

Whole Foods gave Fortune an early look at how it plans to endear itself to a well-educated and oftentimes cynical Brooklyn consumer. Its strategy riffs on an adage: When in Brooklyn, do as the Brooklynites do. The new location boasts more than 200 products by 100 local vendors that were created exclusively for what it’s calling the Third and 3rd store, as well as a bike repair station, knife sharpening from a local knife and cutting board maker, a vinyl records section, and accessories made from old records — just to name a few highlights.

While Whole Foods has taken localizing its first Brooklyn store to a new level, it’s not a new approach for the company. The San Francisco Market Street store that opened in October offers shoe shining, fresh honeycomb, an oyster shucking pop-up station, and a Paleo bar. Shoppers of the Tallahassee location can buy local seafood along with entrees and sides smoked in-store. The Detroit Whole Foods offers free classes on nutrition and cooking and a $1 million commitment from its Whole Planet Foundation to support local entrepreneurs through microcredit

MORE: Why IKEA spying on French people is absurd

In Gowanus, Whole Foods has embraced its proximity to one of the most polluted bodies of water in the U.S., says spokesperson Michael Sinatra. “There’s no secret of the irony that we’re on the Gowanus Canal,” he said during a walk-through last week.

In response, Whole Foods has tried to make this location as eco-friendly as possible. The wood used in the paneling and displays is repurposed from the old Coney Island boardwalk destroyed during Superstorm Sandy, and all of its 250,000 bricks are reclaimed from Newark, N.J., primarily from the decommissioned Westinghouse Building. The covered parking area is topped with solar panels that offset 25% of the store’s energy use, and two electric car-charging stations are powered by wind turbines, as are all of the lights in the parking lot. All of the store’s refrigeration comes from carbon dioxide rather than synthetic gases like Freon, and the exhaust from the refrigeration system is then captured and used to cool the store.

Much of the produce will be as local as it gets — supplied by the 20,000 square foot greenhouse on the building’s roof. When it’s fully up and running in a year, it will be the first commercial-scale, fully operational greenhouse atop a retail outlet.

Some of the 200 local products exclusive to the store: Roberta’s from the Bushwick neighborhood is selling its first-ever frozen pizzas; Van Leeuwen’s has created a line of vegan ice cream; Red Hook’s Six Point Brewery and Sprout Creek Farm from upstate New York partnered to make a new ale-washed cheese; and the brewmaster of Evil Twin Brewing partnered with Chocopologie to do a chocolate-infused beer, which was then poured into ganache to make truffles. Local business owners were asked to make some concessions to adhere to Whole Foods’ standards. One example: After agreeing to switch to cage-free eggs and removing high-fructose corn syrup from the recipe, Steve’s Authentic Key Lime Pies of Red Hook will be sold in the store’s bakery department.

Third and 3rd’s prepared foods also reflect the local Brooklyn flavor with a full-service juice bar, a kimchi and pickle bar supplied by local vendors Brooklyn Brine and Mama O’s, two pizza ovens (one wood-fired), a Spanish-style bread oven, and outside vendor Yuji running the ramen bar. Beer aficionados can fill their growlers from 10 taps, while an upstairs restaurant that looks out over the Gowanus Canal will offer diners 16 different brews on tap. The store will also roast its Allegro coffee beans in house, and a glass window lets shoppers watch butchers at work — literally giving them a view of how the sausage gets made.

If Whole Foods can win over locals, its next store in Brooklyn, set to open in hipster-capital Williamsburg in 2015, will feel like a breeze. If that one opens on schedule, it will only have been in the works for three years.