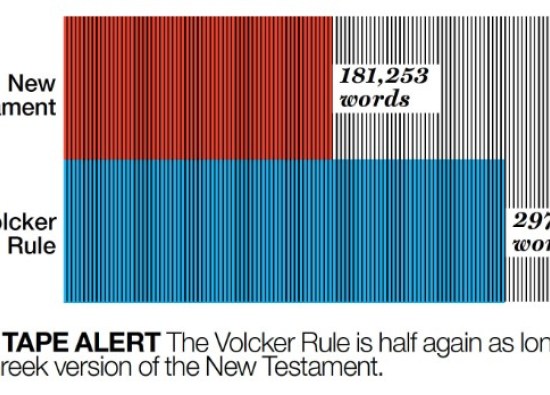 Great sound bites often make for bad policy, because things that seem wonderful and simple in the abstract frequently turn out to be hideously complicated when you try to apply them in real life. That’s my takeaway from the Volcker Rule, which was unveiled in mid-December after five different federal financial regulatory agencies — another example of real-world complexity — finally signed off on it.

The rule has 71 pages, which is a lot of words to transform former Fed chairman Paul Volcker’s simple-sounding proposal into law. His idea, as you probably know, was to ban big financial institutions from putting taxpayers at risk by using federally insured deposits for securities speculation. But the rule itself is only the start of the complexity. It comes with an 892-page explanation. Combine the two parts and you have an opus half again as long as the New Testament, and one that to regular people might as well be written in the original Greek.

MORE:
The Volcker Rule’s not so fatal flaw

In the real world, the longer and more complicated something is, the more difficult it is to enforce and the more opportunities there are to game it. When you’ve got 297,000 words of text (by the count of the Davis Polk & Wardwell law firm), you’ve got loads of lurking loopholes.

Ever since Volcker first enunciated his idea in early 2009, I’ve been skeptical of it because he didn’t propose to stop banks from making markets in securities on behalf of their customers. Market making requires buying and selling securities, and keeping some on hand as inventory. Differentiating between these trades and trades made for a bank’s own account is devilishly difficult, if not outright impossible. Even with almost 1,000 pages of rules and explanations, it’s going to be up to regulators to decide in specific cases what’s speculating and what’s perfectly permissible market making.

Throw in the fact that banks will be allowed to trade in order to hedge exposures to various things, and you’ve got complexity squared. Heck, complexity cubed. Or to the fourth power.

The solution to the problem that the Volcker Rule tries to address is what I call the Hoenig Rule: a 2011 proposal by Tom Hoenig, then head of the Kansas City Fed and currently vice chair of the Federal Deposit Insurance Corp., to ban banks from all trading. However, unlike Volcker, who was an adviser to President Obama and is treated by many people (not including me) as a quasi-divine being, Hoenig’s name carries little clout in Washington.

In a statement, Hoenig said that while he supported the Volcker Rule, it nevertheless allows big financial institutions to “continue to engage in market making and related trading activities, which as we have learned from recent experience can be too easily gamed. All such activities should be conducted away from the safety net, in firms that do not engage in commercial banking.” I totally agree. The Hoenig Rule would need some tweaking, but it starts out way superior to Volcker.

MORE:
Why a Fed taper will be good for the economy

By the way, don’t put too much faith in the fact that chief executives of Volcker Rule institutions will be required to personally certify that the rule is being observed. The Sarbanes-Oxley Act, enacted in 2002 after the Enron and WorldCom accounting scandals, required similar sign-offs and was supposed to eliminate earnings restatements. However, there are still plenty of those.

The Volcker Rule is better than nothing, but it’s just not worth the effort and expense expended on it or the problems it has caused and will cause. Ditto for “living wills,” which supposedly will let regulators liquidate huge, troubled financial firms without risking taxpayer money. Ditto for tax “reform,” in which what I consider a loophole is something you might consider a legitimate deduction. And vice versa.

I’m all in favor of clarity and simplicity, which I consider my stock in trade. But as Volcker shows, transforming simple-sounding ideas into legislation isn’t simple. Proposing solutions is one thing. Writing laws is a lot more difficult.