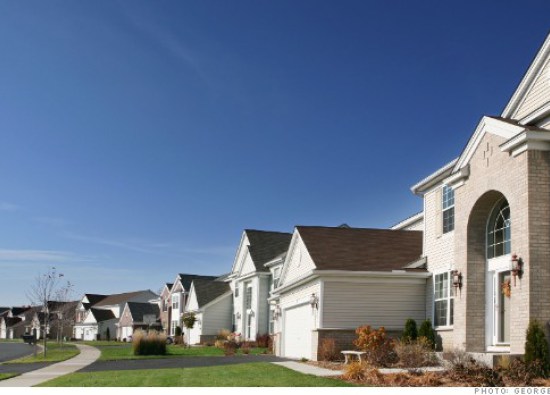 With stocks a whisker from posting a record this year, some investors are latching onto homes that fetch $1 million or more.

Surging stock prices and increased consumer confidence are among the factors propelling sales in the upper-end housing market, says Walter Molony, a spokesman for the National Association of Realtors.

Sales of homes priced at $1 million or above in the U.S. rose 31% to 8,900 units in October from the same month a year earlier, according to the NAR. The gain was higher in September as sales in that price category climbed nearly 40% to 9,000 units from September 2012.

But what will happen to the hot $1 million-plus home market if stocks fall and interest rates rise?

NAR chief economist Lawrence Yun sees those sales increasing more modestly at 10% to 15% next year over 2013, partly because of slightly higher interest rates and the stock market possibly topping out.

“I’m not so concerned about a negative impact on the $1 million market unless there’s a substantial (stock market) correction,” Yun says.

If the stock market falters and mortgage rates rise, there could be a flattening in the sales of homes that cost $1 million or more but not outright declines, says Keith Gumbinger, vice president of HSH.com in Riverdale, N.J. He says a fall in stocks often means investors plow money into bonds, helping reduce interest rates and making financing options more attractive.

At the same time, tight mortgage underwriting standards are expected to ease somewhat for jumbo mortgage borrowers. “This should help keep the luxury housing market moving in 2014,” he says.

Hoping home values will rise faster than stock prices going forward, Nicholas Pesa is hunting for a condo in the ritzy Gold Coast area in Chicago.

Pesa is looking to buy a two-bedroom or three-bedroom high-rise condo near Lake Michigan for $900,000 to $1.2 million, using $700,000 from stock he sold this year to apply toward the purchase. “There is not a place better to live in the world than Chicago in the summer,” he says.

Pesa believes residential property will appreciate faster than stocks. “If the stock market does correct, I’m hedging the downside on property will not depreciate as much,” he says. Pesa, 61, is partially retired and a partner with Careforde Inc., an Internet-driven medical supply company. He hopes to move into his new home by spring.

Molony says some people buy $1 million-plus homes as a diversification strategy to expand their investment portfolio into another asset class like real estate, particularly if they don’t see the bullish stock market moving much higher than from current levels.

Though economic and housing experts are mixed on whether the wealthy are cashing out stocks to spend lavishly on luxury homes, they agree that anecdotally the market could be bolstering sales.

“The growth in the equity markets has really helped the sale of $1 million-plus properties as a lot of those have been made with cash purchases,” Molony says.

Molony says elevated levels of activity of luxury-home buying by affluent individuals is happening in California, which is also the state with the nation’s largest share of million-dollar homes. He says that’s true in places like San Francisco and Silicon Valley where there are more people who can pay cash for homes and home prices are typically rising faster than other parts of the country.

Stan Smith, managing director of Teles Properties in Beverly Hills, says his firm is seeing “a substantial increase in the number of cash purchases” for luxury homes this year over previous years. The company typically sells homes ranging from $3 million to $25 million in swanky neighborhoods like Beverly Hills, Holmby Hills, and Bel Air. He says his firm sold a record 2,800 houses through the first 11 months of this year, up 32% from the same period last year.

Smith declined to say specifically if the brisk activity is caused by Wall Street’s surge as many clients don’t disclose the source of their finances. Smith works with clients that include writers, directors, producers, and others in the entertainment industry. But he says he could see how purchases in the $1 million-plus house category could rise as stock gains have increased the equity position for many individuals.

“The increase in equity created by the rise in the stock market has added to the net worth of many of our clients,” Smith says, noting as Molony had that this makes it easier for buyers to make cash purchases.

Molony added that the purchase activity has been brisk in other regions like Washington, D.C., the Hamptons in New York, parts of the New York City metro area, and the North Shore of Chicago.

Mark Fleming, chief economist at CoreLogic, an Irvine, Calif.-based real estate data and analytics firm, says foreign buyers acquiring very expensive homes or condos in gateway cities like Miami, New York, Los Angeles, and San Francisco could be fueling sales. He says those buyers may be tapping into the U.S. stock market or diversifying their assets from countries they are heavily invested in such as China, Brazil, and other emerging markets with a high concentration of high net worth individuals.

Through October of this year, nearly $21 billion has flowed into U.S. equity funds, up from $6 billion from the same 10-month period in 2006, according to the Investment Company Institute. The financial crisis in 2008 prompted many investors to sell stocks, a reason for the wide swing in the figures as the market has slowly recovered.

MORE: Corporate tax giveaways are not worth the trouble

Gumbinger of HSH.com says there is a cohort of buyers that are using a combination of proceeds from the sale of existing homes and cash generated from the sale of stocks or bonds to buy $1 million-plus homes. He says stocks and real estate (home prices) are among the few assets that have risen in recent years. The effects, however, may be uncertain, as a scaling down of the Federal Reserve’s bond-buying program would raise mortgage rates higher.

Another factor that may be sparking the $1 million-and-over market is that mortgage rates are extremely attractive to wealthy house buyers. Gumbinger says the average rate on a 30-year jumbo mortgage nationally was 4.44% the last week of November. The rate on a five-year mortgage, also known as a 5/1 ARM, was 2.93%. That home loan allows a borrower to pay a lower fixed rate of interest for the first five years before the rate adjusts. The rates are now only an earshot from all-time record lows reached the first week of May 2013, Gumbinger says . It’s common for jumbo borrowers to consider ARMs for financing.

Jim Merrion, regional director of RE/MAX Northern Illinois, says the region is seeing more activity at the upper end. A total of 1,859 homes in the $1 million or more category were sold in the Chicago metro area from January through November 2013 as reported by MRED, the state’s largest MLS. Sales rose 34% from 1,385 units sold in the same period last year.

“Increasing economic stability, employment, and consumer confidence are all factors for this surge in activity. The improved market has also allowed trade-up buyers to move up to more expensive homes,” Merrion says. “ We expect this positive trend to continue to rise for these reasons.”