‘Is Sergey Brin Batman?’ And other burning questions of our time 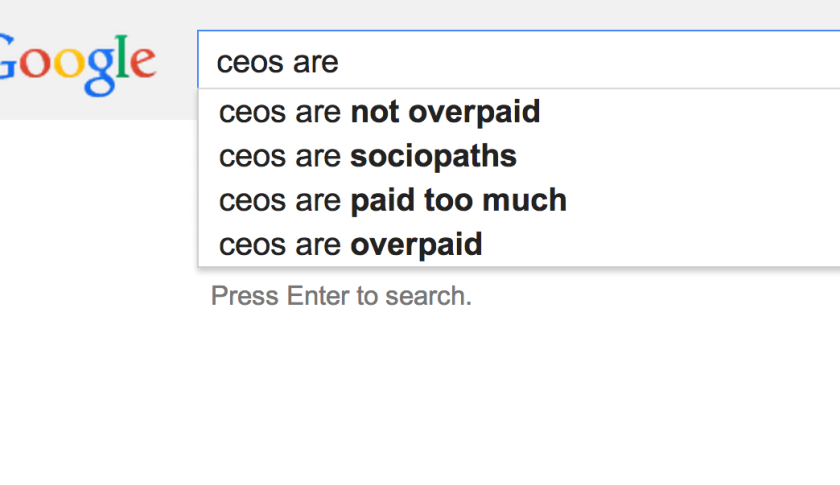 At Fortune, we strive to bring you the business news you need to know. But are we bringing you the business news that you want to know? Judging from the most frequently searched queries about today's business leaders, maybe not. According to the results presented by the autofill mechanism on Google search, some of the most pressing questions lie beyond our magazine's typical purview. For example, "Is Richard Branson a virgin?" (no!) and "Will Bill Gates give me $5,000" (unlikely!), and, mysteriously, "Sergey Brin is Batman" (well, maybe...). To see the answers to the Internet's most persistent questions about top business executives, read on.

Q: "Can Mark Zuckerberg see everyone's Facebook?" A: Probably. Information shared with Facebook is likely viewable by Facebook's highest ranking executive. (Does he have the time or interest? Probably not.) Q: "Mark Zuckerberg is a CIA agent." A: No! (At least, we're pretty sure.) Despite what The Onion says, the popular social network is not a government surveillance apparatus, and its founder is not a "decorated agent codenamed The Overlord." Though we think that would look pretty snazzy on business cards. Q: "Why is Mark Zuckerberg a robber baron?" A: Despite a conspicuous lack of legendary facial hair, as is typically seen on the 19th century industrialists for whom this term is usually reserved, Zuckerberg's net worth is estimated to be an eye-popping $19 billion. (Whether you deem that to be from "plundering" and "swindling" is up to you.)

Q: "Can Richard Branson read and write?" A: He surely can, though he suffers from dyslexia. Q: "Did Richard Branson really buy Pluto?" A: No, that was a 2011 April Fool's joke. Q: "Is Richard Branson a virgin?" A: We're typically not privvy to such things, but Branson has three biological children, so that's a resounding no.

Q: "What watch does Lloyd Blankfein wear?" A: He wears several types, though he seems to prefer synthetic sports bands. Q: "Lloyd Blankfein is doing God work" A: According to one of his (likely in jest) remarks from 2009, yes. Q: "Why is Lloyd Blankfein not in jail?" A: Because no charges were brought against the executive in the wake of the global financial crisis that began in 2008. Plus, he's got a pretty good attorney.

Q: "Jamie Dimon is Greek." A: Yes! His grandfather was an immigrant originally named Papademetriou. Q: "How tall is Jamie Dimon?" A: This was a startlingly common question for everyone on this list. U.S. president Barack Obama is just over six feet tall, so we'll put Dimon at about 5'11''. Q: "Why does Jamie Dimon still have a job?" A: We kindly suggest you ask his board of directors.

Q: "Why did Elon Musk divorce Talulah Riley?" A: At the time, Musk said of his then-26-year-old wife, "We took some time apart for several months to see if absence makes the heart grow fonder, and unfortunately it did not." Q: "Is Elon Musk Tony Stark?" A: To answer this question, put that thing down, flip it and reverse it: the billionaire character at the center of the Iron Man movie series is actually inspired by Mr. Musk, not the other way around. Q: "Does Elon Musk sleep?" A: He does indeed, between six and six and a half hours a night. (That surprised us, too.)

Q: "Is Sergey Brin married?" A: Separated. In September, he split from his wife of six years. He is reportedly involved with another Google exec. Q: "What does Sergey Brin drive?" A: Taking a cue from Mr. Musk, Brin drives a Tesla Model S. Q: "Sergey Brin is Batman." A: He's a handsome, unattached billionaire who wears a lot of black and works in a secret lab designing gadgets to enhance human abilities. We'll let you be the judge.

Q: "Does Bill Gates smoke weed?" A: It was once his drug of choice, according to a 1994 biography. Q: "Why does Bill Gates have a mugshot?" A: He was arrested in Albuquerque for driving Microsoft co-founder Paul Allen's car without a license. Q: "Bill Gates is the devil." A: Oh, now, come on.

Q: "Is Sheryl Sandberg black?" A: We're going to go with "no" on that one. Q: "Does Sheryl Sandberg have children?" A: She has two children. (Hence her suggestion to professional women to Lean In.) Q: Is Sheryl Sandberg a Republican?" A: Highly unlikely. She has contributed to the campaigns of a number of Democrats, including some guy named Barack Obama.

Q: "Is Donald Trump a millionaire or billionaire?" A: Billionaire, with a big ol' "B." Q: "What does Donald Trump eat?" A: Other business executives' lunch, he might say. In all seriousness, though: "All types [of food] -- pastas, steaks," he says. But no alcohol. Q: "Does Donald Trump wear a wig?" A: Negative -- that's his real hair.

Q: "Why does Steve Ballmer sweat so much?" A: As best as we can tell, he's just enthusiastic about his company. Q: "How does Steve Ballmer still have a job?" A: Because his board didn't fire him. However, he formally resigned earlier this year. Q: "Does Steve Ballmer do drugs?" A: No. Despite his occasionally erratic behavior, the outgoing Microsoft CEO has not been linked to any kind of drug use.

Q: "Does Jeff Bezos have a glass eye?" A: Despite his well-known unflinching gaze, he does not. Q: "How does Jeff Bezos pronounce his name?" A: Say it with us now: "BAY-zohs." Q: "What is Jeff Bezos thinking?" A: If we knew that, we'd be rich.