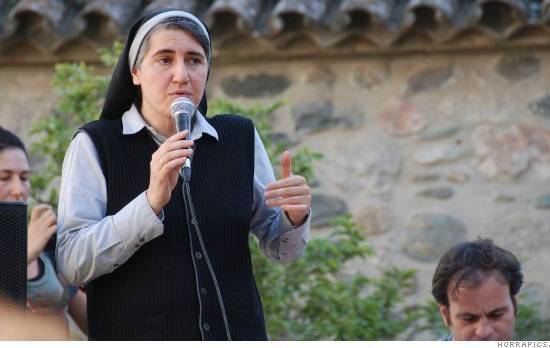 One of Spain’s most charismatic and media savvy political leaders, the Benedictine nun and physician Teresa Forcades, shot to fame in 2009 after she slammed the WHO and the pharmaceutical industry for pushing what she called a dangerous vaccine for swine flu. More recently, she published a book in which she called for the suppression of political parties because they were undemocratic.

In April, she joined up with Arcadi Oliveres, an economist who promotes degrowth, a philosophy that advocates cutting production and consumption, to launch a political movement called Procés Constituent in Spain’s Catalonian region. Not a political party itself — it’s more of a lobby that aims to unify the left and the disaffected in Catalonia — this group’s manifesto calls for the nationalization of banks and energy companies and an independent Catalonian state outside of NATO.

“What Teresa Forcades and I laid out is the belief that the economic, social, and political situation in Catalonia, Spain, and Europe was truly a disaster, and it was necessary to change things,” Oliveres told me. “Unfortunately, we realized that the so-called conventional parties had almost no desire to change.”

Over the next six months, more than 40,000 signed up as Procés Constituent “adherents.” Forcades publicly dreamed about enlisting 100,000 people by year-end (it will likely fall short; Fortune made multiple interview requests to Forcades, but she is teaching in Germany and was not available for comment). And the group brought out thousands of members to protest the banking system during Catalonia’s annual Diada national celebrations.

It’s easy to exaggerate Procés Constituent’s importance, but the disaffection it represents is undeniable. As in other countries battered by the eurozone crisis, Spanish citizens were angered by the austerity measures demanded in exchange for bailout money by the “Troika” of the EU, the European Central Bank, and the IMF. Wages dropped, unemployment soared, and the welfare state frayed as the government cut social programs, education spending, and labor rights.

Worse, Spain’s dominant political parties — the right-leaning PP (Popular Party) and the center-left PSOE (Spanish Socialist Workers Party) — both seemed to believe that accepting austerity in exchange for bailout money was the only way to go.

“All the political parties are about austerity and cuts,” says Ignacio Lago, an associate professor of political science at Barcelona’s Pompeu Fabra University.

With neither party listening to their concerns, many Spaniards began to abstain from the political process or vote for small parties. In the 2011 elections, the PP won 186 of the 350 seats in Congress (the PSOE has 110), but a recent study from the newspaper El País found that if elections were held now, neither of the major parties would win close to a majority, and small parties would increase their share from 54 to 73 seats.

“That is a logical result of the fact that in the eyes of the public, both of the major political parties are tainted by responsibility for the current state of affairs,” says Robert Fishman, a sociology professor at the University of Notre Dame who has studied the euro crisis. “Exactly the same thing has happened in Greece and Italy.”

In the case of Procés Constituent in Catalonia, the main parties’ deafness has united disaffected middle-class voters with political leftists and those who, for reasons of identity and history, long for an independent Catalan state.

“The support of the Procés Constituent is really indicative of amorphous or generalized support for a whole family of movements that reject the status quo,” Fishman says.

The downturn has added an economic rationale to the dream of independence — Catalonia wouldn’t have to send its taxes to the central government in Madrid — and in opinion polls a slim majority of Catalans now want to break free. The increasing power of pro-independence forces in Catalonia has pushed the centrist regional government to push for a referendum on independence, something Spain’s national government calls illegal.

In theory, Catalan independence could cause a domino effect in which other regions of Spain — and regions in other EU countries — push for separation, leading the EU to collapse. But there’s a practical problem with that dream, says Ignacio Lago: For many Catalonians, support for independence assumes that a Catalonian state would be part of the EU, but the EU has said that breakaway regions would lose membership.

“I think there’s an absolute consensus, among all participants, that outside the European Union the independence of Catalonia is an economic ruin,” he says.

Still, no matter how unlikely the dreams being sold by groups like Procés Constituent may be, the leaders of Spain’s political center will continue to lose support to them until they can offer something more plausible of their own.