Slash gets in the (video) game 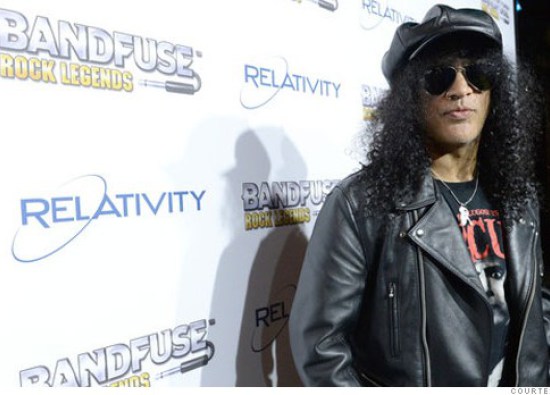 Saul Hudson is better known to millions of rock fans as Slash. And to a younger generation of gamers, the former Guns N’ Roses lead guitarist is known for his work on Activision’s (ATVI) Guitar Hero III: Legends of Rock back in 2009 and the new Realta Entertainment BandFuse: Rock Legends Xbox 360 and PlayStation 3 game.

“BandFuse is a very basic concept, in essence really it’s Guitar Hero using real strings instead of whatever that was that you used to hit with your right hand,” said Slash. “The most frustrating thing about Guitar Hero was you could spend all that time getting good at it, but it was a completely useless skill that people were spending 18 hours a day doing. This game is fun, but it uses a real guitar.”

Slash knows firsthand the addictive nature of Guitar Hero. He first saw the game Guitar Hero II on the back of a tour bus. He had his kids with him, and they played the game while he watched. He looked at the soundtrack and was impressed with the catalog of music, which featured a lot of well known rock tracks such as “Shout at the Devil” by Mötley Crüe, “Monkeywrench” by Foo Fighters, and even Guns N’ Roses’ own “Sweet Child O’ Mine.” Not too long after that, he got his own copy.

“I hooked it up, and I was completely addicted to it for maybe two months,” said Slash. “I mastered the game. They couldn’t even get me on the phone at that point. I was locked up in my office with my Guitar Hero.“ The franchise blew up with Guitar Hero III, which featured Slash on the box.

“I guess the whole idea of a rock star guitarist thing — even just faking it, just a little bit above air guitar — just seemed to turn everybody on,” he said. “I have friends who had kids, and they couldn’t believe that the guy on the box was a real person, and they were completely astounded when they would be in the same room with me, ‘There’s the Guitar Hero guy.’”

There is a direct connection between Guitar Hero and BandFuse beyond Slash. Developer Harmonix, which also created the Rock Band games, worked with Realta to fine-tune the BandFuse experience. The game works with any electric guitar, but there’s also a special $180 Guitar Bundle sold exclusively through Guitar Center that includes the game, cables, and an authentic Fender Squier Bullet guitar.

Games like BandFuse and Ubisoft’s (UBSFY) Rocksmith franchise are bringing about a resurgence in videogame music at a time when many schools have eliminated musical education. Slash has spent a lot of time supporting different organizations that are implementing music programs in schools or making private ones, but gaming is opening up a new opportunity.

“If somebody wants to learn how to play to guitar, it’s one of many options available today,” said Slash. “Some people might stumble on it because they like music, and because it’s a game, they’ll pick up the guitar just because that’s the instrument that works with the game. There’s a lot of different ways that people will purchase this game, and you just have to let it out there for a while and see what the pattern is, but I think for the most part it’s going to be kids who want to learn how to play.”

Games are already part of education in schools. Ubisoft, in partnership with the American Alliance for Health, Physical Education, Recreation, and Dance (AAHPERD) has used videogames to get kids active. The game maker has over 30 middle and high schools in the U.S. using Just Dance 2014 as part of physical education. Konami Digital Entertainment has implemented DanceDanceRevolution Classroom Edition in schools around the country.

“It seems like it would be a great, fun tool in a music classroom to be able to learn guitar,” said Slash. “Sometimes you have to think of creative ways to turn kids on, so this would be a perfect tool if you were the teacher trying to teach kids how to play guitar using more contemporary popular music. It would make it way more intriguing for whatever the age is — 7-year-olds up to like 15-year-olds — to actually learn how to play songs that way, rather than going to the page in the music book and learning an exercise.”

Even beyond music videogames, gaming has emerged as a great way for new artists to get heard in today’s crowded digital entertainment landscape. And it gives established bands a ripe avenue of distribution to a growing audience of gamers.

“Radio is dead, and the actual record industry is pretty much dead, so videogames are great exposure for your music, which was always more important to me” said Slash. “It’s worked on both sides creatively and also has been a good business model. It’s also very cool depending on the game, it’s often times really great to be a part of a popular game and having kids playing something where your song is featured.”

While he’s embraced gaming technology, Slash was slow to come around to the social media revolution.

“It’s funny, I’m the perfect guy to not be interested with anything having to do with social media because I’m not a social person,” said Slash. “But what happened was when I was making my first solo record, someone had mentioned Twitter (TWTR) to me and what it did exactly because I didn’t even know, and I thought what a great way to promote your stuff. I got on Twitter and then not long after that I hooked up a Facebook (FB) account as well. Now that’s my main tool for marketing.”

Slash continues to create new music. And he’s likely to make new younger fans through BandFuse, helping to inspire the next generation of rock musicians.