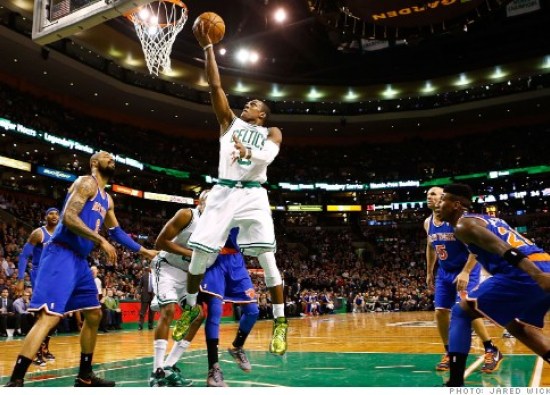 Just before Thanksgiving, executives from the enterprise technology company SAP (SAP) and the National Basketball Association stood in a suite at Madison Square Garden and excitedly told members of the media about the league’s new technology offering for fans.

The product is NBA.com/stats, a webpage relaunched last month, free to all, with detailed box scores and statistics from every single game, plus video associated with each individual stat. For example, you can check Boston Celtics point guard Rajon Rondo’s total for assists, then click to see video footage of each one, if you feel so inclined.

Launched on the same day is the even more esoteric NBA.com/DLeague/stats, where you can find the same in-depth box scores (but not yet video) for the NBA Development League. It all runs on SAP HANA, the in-memory database technology platform that can “absorb large amounts of data very fast,” SAP project manager Keith Schmehl says. (Madison Square Garden has also partnered with SAP to outfit its arena with analytics technology; MSG spent $1 billion over the last three years to transform the facility.) Though HANA was first brought to market two years ago, “this is its most highly visible project to date,” Schmehl says.

NBA.com/stats is equipped to handle between 15,000 and 20,000 simultaneous users, and can process 250 queries a second. Given the many data fields in use, there are 4.5 quadrillion possible permutations of statistics on the site. The box scores go back to 1946, but the video begins only at last season. Video footage is posted 45 minutes after the end of a game, but it’s only available to those using a desktop computer. (The league has plans to make the videos available on phones and tablets, but NBA CIO Michael Gliedman says it will be “a huge endeavor.”)

During a demonstration, some reporters in the room looked delighted about the (admittedly hardcore) new resource. For most basketball fans, however, this is no game-changer.

It is difficult to imagine an average basketball fan rushing home after a game to sit at a computer and watch more videos of the game. For basketball beat reporters, on the other hand, it’s an exciting gift. (Indeed, a more bare-bones version of this page has existed exclusively for use by the press since February 2012; it required a password for access.) Gliedman says the technology was shown to commissioner David Stern and his heir Adam Silver in August; they decreed that it should be available to all fans. Beefing it up for the public took six months.

So why — if you’ll pardon the pun — all the hoopla? Because of Moneyball, in a sense.

Like other professional sports leagues, the NBA has awoken to the statistics revolution sweeping sports and national politics. For the former, Michael Lewis’s 2003 book detailing the Oakland Athletics’ data-driven approach to team-building changed the way Major League Baseball teams were managed; that shift, in turn, prompted Hollywood to revisit the otherwise wonky book and turn into a $75 million box office smash. (Brad Pitt may have helped.) For the latter, Nate Silver’s FiveThirtyEight column at the New York Times was such a must-read destination during the 2012 presidential election that he was able to sell it to ESPN as a standalone publication that will cover news using analytics.

In other words, the data-driven approach has moved from the fringe to the mainstream. The problem is that awareness doesn’t necessarily translate to practice.

“It’s a small group, but it’s a very vocal group, these Sabremetrics-type fans,” says Bryan Srabian, director of social media for the San Francisco Giants. “We have a separate Twitter account just for real-time stats. And we realize that not everyone cares about those stats — we don’t cross-promote it that much — but it’s there for those hardcore fans.”

There is evidence to the contrary, however. The tremendous popularity of fantasy sports, which rely heavily on various real-life statistics, demonstrates that regular people are willing to dig into the data, often with fervor. According to the Fantasy Sports Trade Association, more than 33 million Americans to date have played fantasy sports in 2013; American football leads the way, followed by baseball and basketball. (Though basketball is in third place, it is growing faster than any fantasy sport.) This perhaps explains the true value of the NBA.com/stats page: It is a bet on the future.

Even then, “it is surprising [that] these leagues do not jump into the deep end even more aggressively,” says Stephen Wendell, COO of Reality Sports Online.

They are certainly trying. Among other U.S. sports leagues, Major League Baseball has long been praised for having superb back-end and fan-facing tech (see Fortune’s previous coverage: “MLB.com is gearing up for next season“) and continues to invest in its successful At Bat app, which garnered more than 10 million downloads this year, up from 6.9 million in 2012. In 2009, Major League Baseball Advanced Media introduced a clickable line score that takes you right to the video of any half inning. And PITCHf/x, which the group rolled out in 2006, tracks the characteristics of every pitch.

As for the front-runner in fantasy, the National Football League employs SAP HANA for data storage for its fantasy football comparison tool. This season, the league overhauled its NFL Mobile app in partnership with Verizon (VZ) and introduced NFL.com/genius, a marketplace for crowdsourcing fantasy questions to be answered by experts. (To date, 10 million answers have been posted to it.) “Our philosophy is we don’t always have to be first, but we have to get it right,” says Greg Isaacs, VP of product and tech for the NFL.

Whether it’s a technology arms race or not between the leagues is an open question. (And whether it’s even a fair comparison: The MLB must handle double the number of games per season than the NBA, and nearly 10 times as many as the NFL.) NBA CIO Gliedman insists that, “we don’t spend too much time thinking about how to match what someone else is doing. We just want to provide the best experience for fans possible. Everybody’s in this game now, and I don’t think anybody is sitting there looking at what the others are doing.” Isaacs, of the NFL, is more forthright: “You have to watch them. The world is changing so rapidly that it would be a disservice to our fans not to look at what the major players are doing, and that would be MLB, NBA, NHL. And even some of the up-and-comers like MLS and even international teams.”

As for NBA.com/stats, it is, at its simplest, a very cool outlet for those who care. A more pressing task for all professional sports, however, may be teams’ ongoing trouble with attendance. Despite heavily discounted tickets, few are filling their arenas. One reason among many: because the collective experience of watching a televised game in the comfort of the home has surpassed its live alternative. Seeing players sweat it out on the court may be a thrill that can’t be duplicated, but when you wrap in the added time to get to the game, the headaches of parking, and the price of concessions (the cost of a single beer at the aforementioned Garden: upwards of $9), the equation shifts in the opposite direction.

Will the NBA’s new stats page impact that trend? Probably not. But it’s a slam-dunk for capturing the attention of the league’s most dedicated fans.