An illustrated guide to bear markets and other business terms 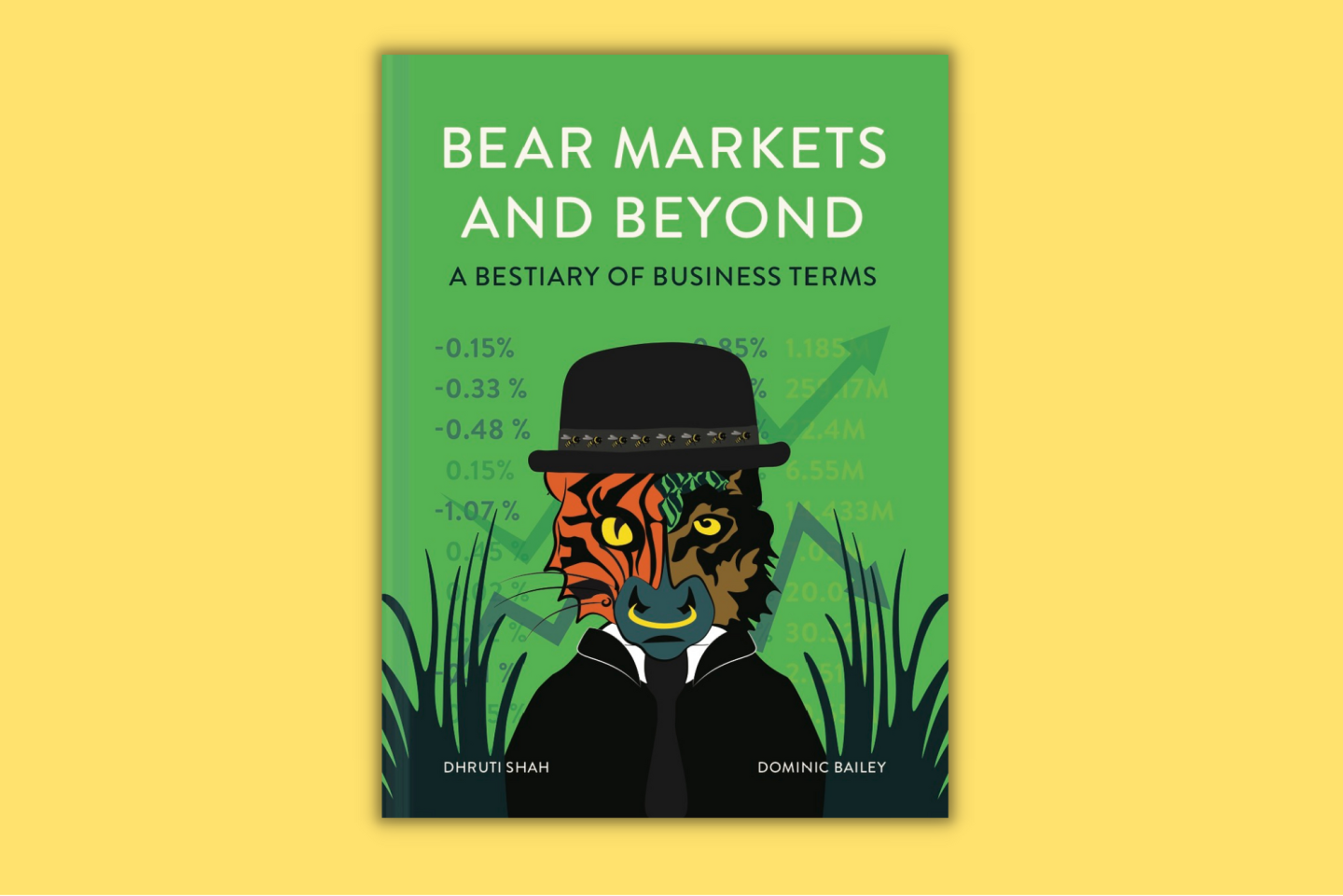 'Bear Markets and Beyond: A Bestiary of Business Terms' by Dhruti Shah and Dominic Bailey.
Courtesy of Pavilion Books

They are all beasts that appear in the global economic ecosystem. They pop up as warnings, messages and signals and provide us with useful analogies for describing and navigating what can sometimes be a confusing, closed-off world.

Animals have always exerted a strong hold on our imagination. You only have to look at prehistoric cave paintings to see how central they were to our existence and, in capturing these images and using them to pass on messages to the community, we can see how they were our first linguistic tools and shaped our relationship with each other.

It’s therefore not surprising that, many millennia later, our contemporary Capitalist world is populated with metaphorical animals that stalk the landscape and alert us in the same way to what we can trust and what we should fear. And so, as we find ourselves in the financial jungle, a place of intense competition, where the rules are simply; survival of the fittest, we hope this guide will be your friend. The jargon of the business world is a code but we’re on hand to crack it.

In Bear Markets and Beyond: A Bestiary of Business Terms, BBC journalists Dhruti Shah and Dominic Bailey guide you through the confusing world of business jargon with a bold, graphic bestiary. You wouldn’t want to enter a bear pit unprepared, so watch out for the big beasts baring their teeth and keep your wits about you as you follow us through the undergrowth…

The stag: the patronus of impatient investors everywhere.
Illustration by Dominic Bailey

A Stag is an impatient investor. When a company goes public, it is listed on the stock exchange and shares are offered to be bought and sold. A Stag doesn’t hang around to see how things pan out as they’ll have bought shares prior to public trading and then sell them straight away. It’s a strategy that is no-nonsense and fast-moving.

A Stag likes hot deals and quick profits. Oh Bambi, is this what you’ll grow up to be?

There was a lot of ‘Hamsterkauf’ activity among consumers at the onset of the pandemic.
Illustration by Dominic Bailey

In 2020, the world came to an unexpected standstill as COVID-19, a new strain of coronavirus, took hold. Countries were put in lockdown, travel restrictions implemented and self-isolation measures put in place.

Despite attempts by governments to urge people to stay calm, customers seeking to stockpile led to a surge in demand for toilet roll, pasta, and hand gel, among other commodities. This also meant that Hamsterkauf, a popular German word, which translates to “hamster purchase” came to the attention of the world.

It’s a word that represents panic buying and a rise in Google searches and instances of its use on Twitter show that’s just what was happening.

People were posting images of empty supermarket shelves and using the German phrase as a hashtag to comment on the trend. Hamsters love to hoard food in their cheek pouches, but with even pet food running out, there were concerns about the ramifications these stockpiling “Hamsters” were doing to global supply chains.

Narwhal: Unicorn of the sea?
Illustration by Dominic Bailey

A Canadian tech startup valued at more than $1 billion Canadian dollars and which was founded after 1999 can be described as a Narwhal. The term was coined by Brent Holliday, CEO of Vancouver company Garibaldi Capital Advisors. He chose the name as he “understood the narwhal’s horn was to break through the ice because they’re mammals and have to breathe, so that’s a great metaphor.”

The tusks actually seem to be for sensory purposes, but Holliday dismissed that and preferred to keep the original term. It has now gained wider usage and is often seen as a mascot for Canada’s best performing companies—a unicorn of the sea.

Although the term originated during World War II, a “skunkswork project” is still a term used in finance and tech today.
Illustration by Dominic Bailey

A Skunkworks Project involves a small breakaway group of people in an organization. Operating in a radical, unorthodox way, they hope to create something that will turn out to be rather special.

The name originally comes from Lockheed Martin’s World War II Skunk Works group of American engineers who worked on advanced development projects, such as fighter jets. They had a lot of leeway and Kelly Johnson, who ran the original team, came up with fourteen strict rules about how the team should operate.

The name is now a registered trademark and yet the term is still used across businesses and the technology sector to refer informally to breakaway groups with their own autonomy. Both Amazon and Google are believed to have experimental labs operating in a skunkworks-like manner.

The memorable honorific of “vampire squid” was once given to Goldman Sachs.
Illustration by Dominic Bailey

This expression came out of a famous Rolling Stone profile on Goldman Sachs, written by the journalist Matt Taibbi.

He said: “The world’s most powerful investment bank is a great vampire squid wrapped around the face of humanity, relentlessly jamming its blood funnel into anything that smells like money.”

He was writing in the context of the 2008 global financial crash and its aftermath, but the label has stuck to the bank ever since.

Unlike unicorns, zebras are real.
Illustration by Dominic Bailey

In 2017, a new movement emerged in the Silicon Valley.

A group of entrepreneurs got together seeking to create a culture change in the Unicorn dominated tech scene. They called for more “zebra” companies.

Zebras Unite became a call to action to get more funding for startups initiated by women and people from ethnic minorities and to balance the existing venture capital culture. The founders of the movement—Jennifer Brandel, Mara Zepeda, Astrid Scholz and Aniyia Williams—say this is “a moral imperative” and that, “unlike unicorns, zebras are real.”

They described Zebra companies as “profitable businesses that solve real, meaningful problems and in the process repair existing social systems.”

The movement is now well established with chapters based all over the world. And of course, as a group of Zebras is known as a “dazzle,” the founders have, of course, used this collective noun as the name of their annual conference.

Excerpt from Bear Markets and Beyond: A Bestiary of Business Terms by Dhruti Shah and Dominic Bailey, published by Pavilion Books. Illustrations by Dominic Bailey.