Why you should visit Northern Thailand this winter 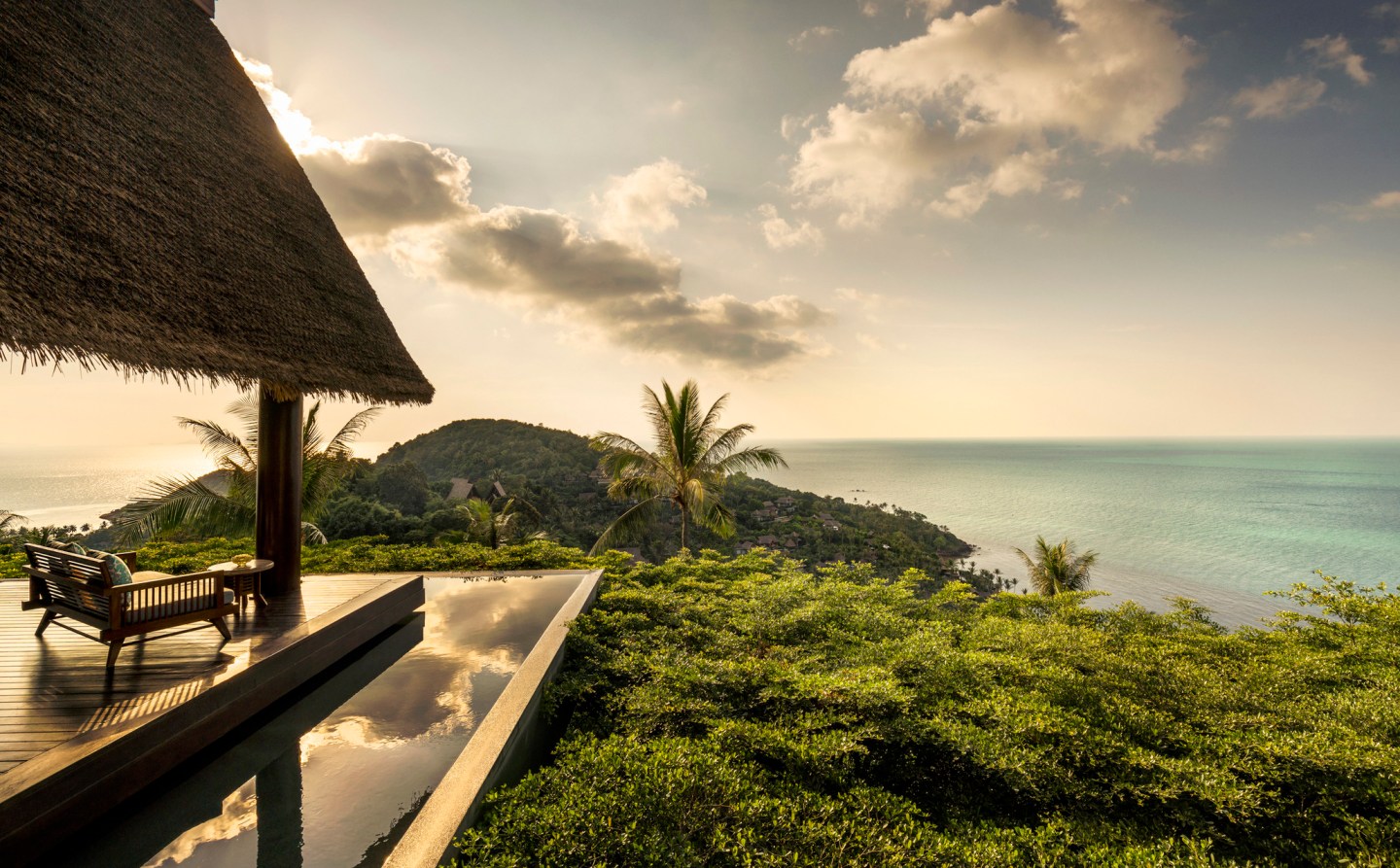 From the remote tropical verdure of Chiang Rai province’s Golden Triangle—abutting Myanmar and Laos in what was once the notorious nexus of the global opium trade—to the bustling city of Chiang Mai, the “rose of the north” and home to more than 300 Buddhist temples, northern Thailand has retained a distinct cultural flavor.

This is in part thanks to its tenure as the former seat of the Lanna (“Million Rice Fields”) Kingdom, which was independent from Siam during the 13th through 18th centuries. The fact that the north was reachable from Bangkok solely via an arduous journey by river or elephant until the early 1900s presents another possible explanation for its individualism.

Regardless, there’s perhaps no better base from which to explore its innumerable riches and mesmerizing natural tableaus than two of Four Seasons’s best Southeast Asian resorts.

Tucked deep within the seemingly boundless bamboo jungle that comprises much of Chiang Rai’s lush landscape, Four Seasons Tented Camp Golden Triangle provides an uber-luxe, off-the-grid respite that anchors a sojourn to Thailand’s northernmost province in singular style. Guests can opt to arrive by long-tail boat along the Ruak River, past Asian buffalo sunning themselves in the shallows, to the exclusive lodge, whose 15 tents—all with spacious decks and some with outdoor hot tubs—elevate glamping to another echelon.

Exquisitely outfitted with custom-crafted furniture in leather and local hardwoods, claw-foot standing tubs, and resplendent beds swathed in mosquito nets, they seamlessly meld the natural environment with modern indulgences, including a top-shelf minibar (the resort is all-inclusive) and irresistible homemade cookies and other nibbles. For families or larger groups, the gorgeously appointed Explorers Lodge, the camp’s private villa, sleeps six and features an infinity pool that virtually juts into the jungle, as well as ample outdoor space ideal for festive barbecues and movies under the stars.

You can arrive by longtail boat and walk with rescued elephants, enjoy a wine and cheese tasting nightly in the wine cellar, and unwind in tented luxury.
Four Seasons Tented Camp Golden Triangle

Arguably the biggest draw of this achingly atmospheric resort is its star residents: six sweet-natured Asian elephants who spend their days luxuriating in the camp’s pristine wilderness, thanks to the efforts of the Golden Triangle Asian Elephant Foundation, headquartered nearby. The organization—of which Four Seasons is a founding member—rescues imperiled pachyderms from Thailand’s streets and other unfit environments, working with both the government and partner hotels to relocate them to safe, healthful habitats.

During the camp’s unforgettable “My Elephant and I” experience, you’ll embrace Thailand’s 4,000-year-old tradition of elephant whispering as you meander to the scenic riverside alongside the docile giants and their mahouts—minders in Southeast Asian parlance. (Don’t be surprised if they lumber just inches away from you en route, and occasionally stop to snap a tasty tree branch with their pink-speckled trunks for sustenance.)

A pair of mahouts, a term for those who tend to and care for elephants.
Alexandra Kirkman/FORTUNE

Once you reach the Ruak’s scenic banks—Myanmar just across the water and Laos’s misty mountaintops on the horizon—you’ll sip refreshments in the waning late-afternoon sunlight and take photos with your new four-footed friends. If you go to bed craving more quality time with these sociable sweethearts, fear not: every morning, Linda—effortlessly chic in a red rope necklace—and her pal Plum preside over breakfast at the open-air dining pavilion, where they’ll happily scarf down cucumbers and other treats you’re welcome to feed them between bites of homemade banana pancakes and savory local specialties like Laotian pho, a rice noodle soup with sliced beef and meatballs.

If you hanker for an offsite adventure, the neighboring Hall of Opium museum articulates a sweeping overview of the opium trade in the Golden Triangle, which for centuries produced more of the drug than anywhere else on earth. Founded by the charitable foundation of the late Princess Srinagarindra, the current king of Thailand’s grandmother, the museum is a fascinating mix of opium’s often harrowing history—complete with short films, sound effects, and life-size dioramas—and sobering anti-drug propaganda.

From there, it’s only about 30 minutes by car to Myanmar (still Burma to the U.S. government), where the busy border town of Tachileik lies a short walk across a traffic-clogged road bridge. Hop in a tuk-tuk to visit the local street markets—which do a brisk trade in top-quality counterfeit handbags, along with exotic fruits and flowers—before heading to Tachiliek Shwedagon Pagoda, a smaller but still-impressive replica of the Burmese capital of Yangon’s gold-plated main attraction. You can make temple offerings that correspond to your birthday and buy hand-painted cards and other quaint souvenirs before heading back to Thailand, your newly Burma-stamped passport in tow.

Once back in the verdant embrace of the Four Seasons, catch a ride in the camp’s refurbished 1975 Land Rover to the amber-lit Burma Bar, elegantly adorned with elephant-centric antiques and teeming with old-world ambience. Arrive by 5:30 p.m. and sink into a leather chair with a craft cocktail to soak up the spectacular views of the Ruak River basin as the sun sets in a blaze of violet and tangerine behind the surrounding hills.

While the resort’s deluxe accommodations—including 12 airy villas equipped with their own private pool and sundeck—and myriad amenities are compelling reasons to stay put, the allure of its exquisite environs prove irresistible. Take a leisurely mountain bike ride led by Mustafa Khalil, the hotel’s charming director of rooms, to absorb the considerable bucolic charms of Mae Rim, a rural Xanadu backed by low-lying hills and home to wondrous unexpected delights, like a temple with a smiling Buddha bedecked head to toe in thousands of meticulously arranged seashells. A knowledgeable guide, Khalil saves the best stop for last: Wat Pa Daraphirom, a century-old Buddhist temple complex minutes from the resort and guarded by fierce stone lions, showcases an array impossibly ornate temple architecture enveloped in a forest of tropical foliage and crowned with golden spires.

Those keen to discover the myriad nuances of northern Thailand’s celebrated cuisine will want to beeline to Rim Tai Kitchen, the resort’s first-rate cooking school, nestled in a breezy, artfully designed pavilion not far from reception. Before you fire up your wok, Suwattana Boonyarattananusorn, its masterful instructor known as Chef Tor, will whisk you off to Kad Thanin (Thanin Market), one of Chiang Mai’s oldest marketplaces, where you’ll sample delicacies like freshly fried pork cracklings that vie for the “world’s-best” title and khao soi, the region’s famed noodle dish, whose rich, fragrant broth is made with red curry Khao Soi paste and turmeric powder.

Cooking isn’t the only hands-on experience on offer. The resort can arrange an outing to Prempracha, Chiang Mai’s leading ceramic studio and factory specializing in fine handmade stoneware, one of northern Thailand’s most prominent artistic traditions dating back to 1350 A.D. (Celadon ceramics, long regarded as the region’s finest, are distinguished by their crackled blue-green glaze made from wood ash.) After an exclusive tour of its expansive showroom and workshop, where gifted artisans painstakingly mold and glaze a vast array traditional and modern pieces by hand, you’ll be invited to paint one of your own, which is then fired to a high shine in Prempracha’s kilns and delivered to your room within the next day or two.

Speaking of traditions, any trip to Chiang Mai would be remiss without a visit to the gleaming gold Wat Phra That Doi Suthep—the city’s most venerated Buddhist temple, and among Thailand’s most famous pilgrimage sites, presiding over the city some 3,500 feet above sea level from the slopes of Mount Suthep, one of country’s highest peaks. King Kue-Na built the monastery of the complex in the 14th century, whose spired pagoda is said to hold a piece of bone from Buddha’s shoulder.

Evenings at the resort kick off at the Ratree Bar, named for a type of jasmine, where you can quaff a zingy Chiang Mai Mule (vodka, chili, ginger, and lime) at its enchanting outdoor lounge overlooking the pool and rice fields beyond.

Later, dinner on the veranda of the resort’s brand-new restaurant, Char by Four Seasons, is a delicious way to end the day. Paying homage to the age-old tradition of grilling, it sources most of its ingredients from neighboring local farms and wows discerning gourmets with dishes like Tasmanian salmon pastrami with toasted sourdough and Thai wagyu striploin, followed by raspberry fermented rice cheesecake. Everything from its steak knives to table wear is handmade in Chiang Mai, a nod to the region’s esteemed heritage of craftsmanship.

Blanketing a palm-studded hillside offering peerless views of the crystalline Gulf of Thailand—a kaleidoscope of celadon and sapphire depending on the light and time of day—the Four Seasons Resort Koh Samui captivates guests from around the world with its sea-facing villas, pristine beaches, superb spa (don’t miss the kala coconut massage), and Muay Thai kickboxing lessons.

But the resort’s world-class cuisine is reason enough to make the trip. At KOH Thai Kitchen & Bar, signature dishes like Larb tuna (marinated with fresh Thai herbs, cracked rice, and chili powder) will dazzle you as much as the alfresco dining room’s jaw-dropping hilltop vistas, while the coconut risotto topped with Andaman sea lobster at Pla Pla, its casually refined oceanside grill, just may change your life.

—This Vegas casino just completed Sin City’s most expensive renovation ever
—Escape the Game of Thrones crowds and enjoy a luxury Croatian vacation in Dubrovnik
—Your modern weekend away meets the Old West in this sleepy California town
—Mexico’s most enticing getaway: San Miguel de Allende
—This hotel is made up entirely of tiny houses
Follow Fortune on Flipboard to stay up-to-date on the latest news and analysis.