Germany Might Be Producing the Best Pinot Noirs Available Today

Pinot Noir is more popular than ever in the U.S., but many Americans are overlooking the world’s third largest Pinot-producing country.
BYJim Clarke
July 14, 2019, 11:30 AM UTC 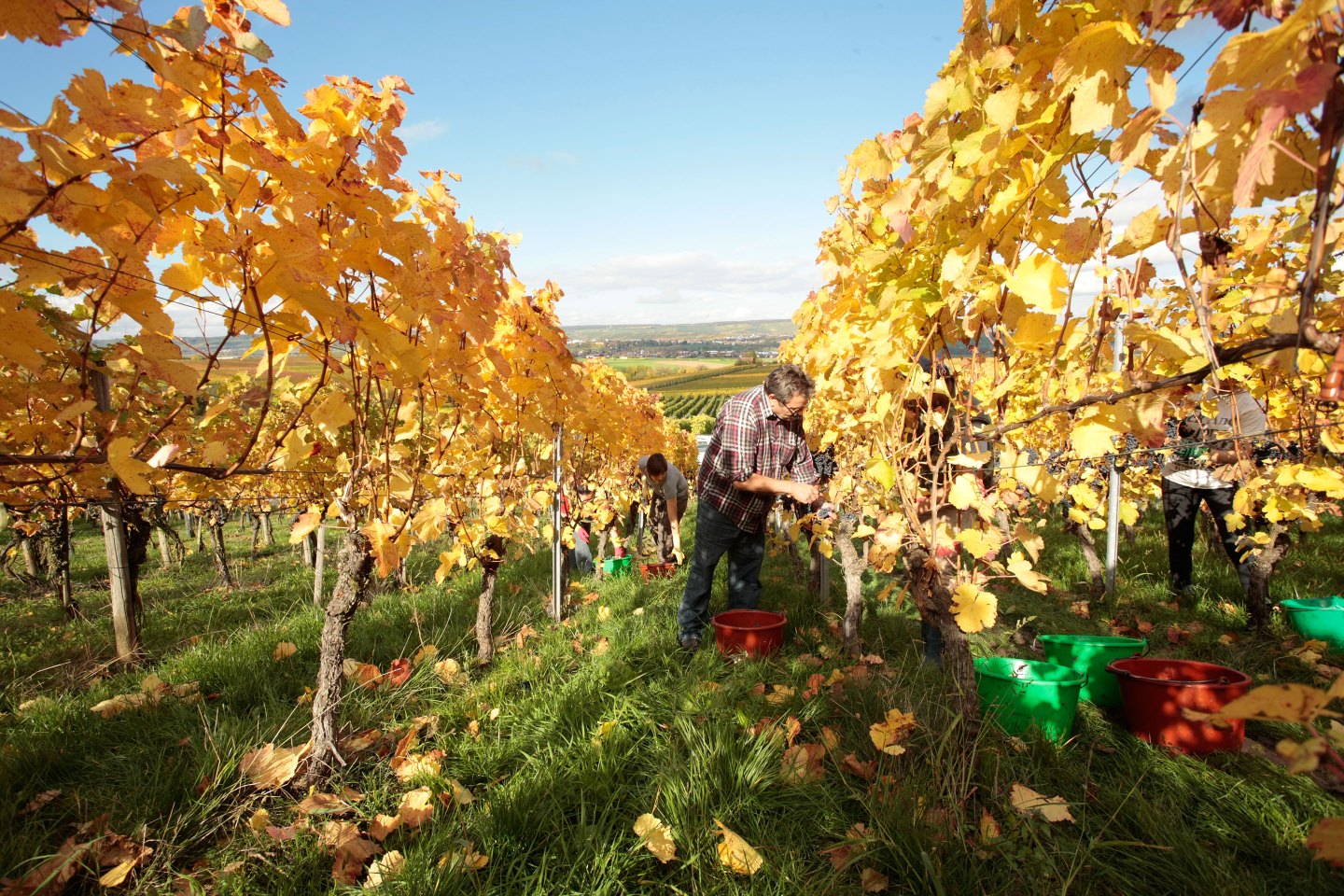 In the world of wine, Germany—like New Zealand or Argentina—has a clear role: Its wineries make Riesling. But while the first mentions of Riesling date from the 1400s, German Pinot Noir actually gets called out more than 500 years earlier. It seems Emperor Charles III brought the grape to Germany from Burgundy in 884. Today Germany has 29,000 acres of Pinot Noir, the third most plantings in the world after France and the United States—and now American wine drinkers are taking notice.

For a long time, Germans kept their Pinots to themselves. “The demand for red wine in Germany kept growing,” says Ernst Büscher of the German Wine Institute, “so there was nothing to export.” The industry focused on exporting Riesling, but Büscher says that’s changed over the past decade. Germans are drinking more white wines, freeing up Pinot Noir for export.

Pinot Noir actually does best in relatively cool growing conditions, which Germany has in spades, but it does need a long autumn to completely ripen. In fact, its German name is “spätburgunder,” which roughly translates to the “late-ripening grape from Burgundy.” Climate change may actually be a net positive for these wines. “As the climate starts to warm, this late-ripening grape has a longer growing season,” says Josh Perlman, wine director at Giant in Chicago. “So they’re able to produce wines with a bit more power to them while still maintaining a lot of freshness. They have good ripeness and can make wines that are bit more like what people expect from Pinot.”

Ernst Dautel holds grapes after harvesting. Dautel cuts down half of each single cluster when they are still green, which reduces the yield and helps to get healthy grapes.
Courtesy of Frank P Kistner

Perlman often lists several German Pinot Noirs at Giant, knowing that they come in a range of styles that offer a range of experiences for his guests. “Someone like Enderle & Moll are making a more classic style of Pinot with softer edge: lower tannins, high acidity. But there are other producers that are making a really racy style, with a high-toned, linear quality to them.”

Those differences represent the range of growing conditions in Germany’s 13 different wine regions. Enderle & Moll are in southerly, warmer Baden, where Pinot Noir makes up more than one-third of the vineyards. Red grapes also predominate in neighboring Württemberg, with Pinot Noir alongside lesser-known German varieties like Trollinger and Lemberger. “The wines of Württemberg often have a bit more acidity than the other warmer wine regions in Germany like Baden or Pfalz,” says Christian Dautel, whose family has been growing grapes in Württemberg in southwest Germany, just across the border from the French wine region of Alsace, for 500 years. “There is huge amount of different soils like limestone, gypsum, red sandstone, and marl. But they are all calcareous with a high pH. This is very suitable for burgundy grapes.”

Wine lovers praise Pinot Noir for its ability to show different characteristics depending on the vineyard site. Dautel says his wine from the Schupen vineyard has a “full-bodied and charming” style thanks to its gypsum soils, relatively low altitude (280 meters), and southern exposure. His vineyards at Forstberg are higher and steeper, with marl soils. Because they cool off more at night, Dautel says, “Forstberg is always even more elegant and fine than the Schupen.”

While in Baden, Wurttemberg, and Pfalz Pinot Noir is found in many spots, as one moves further north, it tends to be concentrated in very particular areas. One of the northernmost wine regions in the country, the Ahr, is peculiarly devoted to red wine, with Pinot Noir in about two-thirds of its vineyards. The reputation of the area today rests almost entirely on one producer, Meyer-Näkel, who pioneered a dry, powerful style of Pinot Noir in the 1980s. However, the total vineyard acreage in the Ahr is only about 900 acres, compared to more than 13,000 acres in Baden.

The Rheingau and the Mosel are probably the two most famous wine regions in Germany, largely due to a strong devotion to Riesling. The former has nonetheless always had a small corner devoted to Pinot Noir in the steep vineyards that overlook the village of Assmanshausen. “We grow around 18 hectares of Pinot Noir, most of the vineyards in Assmanshausen but some in Winkel as well,” says Katharina Fladung of Allendorf, a family-owned winery. “Due to the steep vineyards, the dark slate soils, and the south-facing sites you’ll find perfect conditions for Pinot Noir in Assmanshausen.” The steep slopes encourage small berries and concentrated aromas because of their good drainage, and the dark slate keeps the vineyards warmer in the evening, so ripening doesn’t slow at night. It’s no coincidence that the Ahr actually has similar soils.

The Mosel has just a tiny amount of Pinot Noir, in large part because the Nazis banned it there in 1933 in favor of the more profitable Riesling. It has made a comeback since the late 1980s. One unique example is that of Hofgut Falkenstein. Red wines regular go through malolactic fermentation, a process that smooths out the wine and reduces its acidity. At Hofgut Falkenstein, that doesn’t take place, and the resulting wine has a savory, biting character despite otherwise tasting ripe and dense.

Stefan Steinmetz makes four different Pinot Noirs nearby. “Mosel Pinots are much more elegant and light than those of Baden,” Steinmetz says, but notes that climate change has done more than make Pinot Noir more feasible in the Mosel: “We have higher quality year after year. We already don’t necessarily have to plant it in only the hottest sites anymore.”

“In the early days, excellent German Pinot Noir was the classic talking dog,” says Terry Theise, who imports a wide range of German wines. “It didn’t matter what it said. It was amazing that it could speak at all.” Theise says many of these were showboat wines, overpriced, rare, and not terribly interesting. “They were over-oaked, and overripe in many cases, and over-extracted in many cases.”

At the other end of the spectrum, the more affordable Pinots were often thin. “There is something about the German Pinot Noir producer that wants the wines to be like white wines except with a little tinge of red.” Nonetheless, at a tasting of the German wines in his portfolio, Theise expressed satisfaction with the both the quality and breadth of style the Pinot Noirs on offer, demonstrated by producers such as Breuer, Dautel, and Ziereisen. “Pinot Noir is definitely part of the German zeitgeist,” Thesie says. From where he’s standing, Germany is working hard to earn a reputation for “lovely, affordable, delicious Pinot Noir.”

—How this young entrepreneur is updating the biergarten experience