Cape Town: The Wondrous Winelands at the Edge of the World 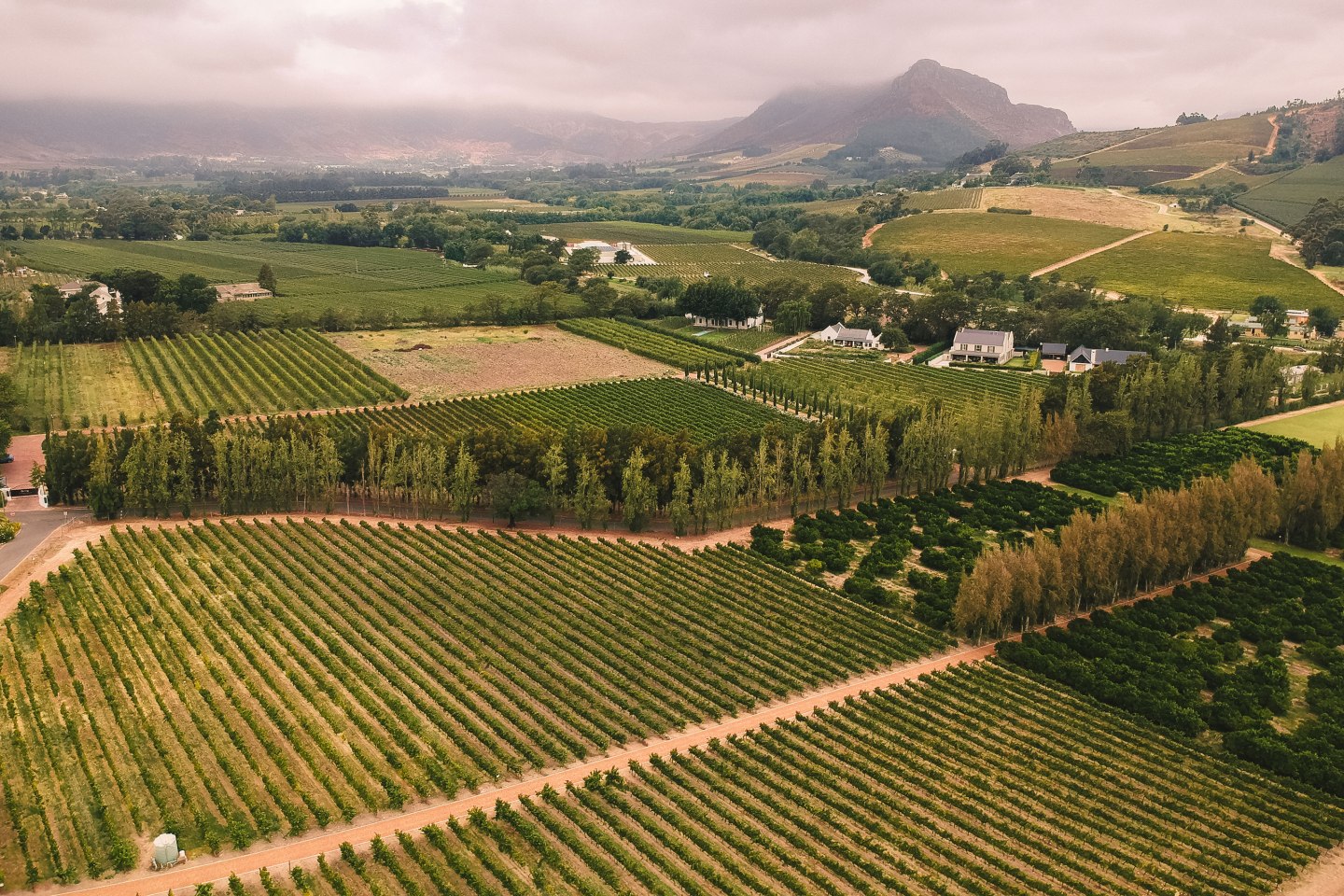 “Today, praise be to God, wine was made for the first time from Cape grapes.” These prophetic words, written by Dutch colonial administrator and founder of Cape Town, Jan van Riebeeck, in his diary on February 2, 1659, marked the birth of wine production in South Africa. Van Riebeeck arrived from Holland in 1652 as an emissary of the Dutch East India Company, an early trading conglomerate, to establish a refreshment station that would supply fresh produce to its merchant fleet at the Cape of Good Hope, on Africa’s southern tip. Three years later, he planted a vineyard of red grapes with vines shipped from Europe as an additional means of combatting the scurvy that afflicted many of the Company’s sailors.

Little did van Riebeeck know that his earnest efforts would literally sow the seeds of a flourishing wine industry at the edge of the world. Now, 360 years later, South Africa ranks tenth in wine production globally—anchored by sauvignon blanc, chenin blanc, and chardonnay, to name a few—producing 3.4% of the world’s volume (Italy and France are first and second, at 17.4% and 16.6% respectively). And while South African vintages are readily available stateside—exports of its chenin blanc to the United States, for example, rose 13% last year—a visit to the incomparable Cape Winelands is an unforgettable journey of discovery for intrepid oenophiles.

Read More: A Guide to the Food and Wine Capital of South Africa

Besides the rare distinction of being able to pinpoint the advent of its wine industry to an exact date, South Africa also boasts some of the most jaw-droppingly beautiful winelands on earth, thanks in large part to its singular, and singularly stunning, geography. Limited mainly to the country’s southwestern tip in the Western Cape Province, the region is rooted in some of the oldest, most diverse viticultural soils in the world—derived from granite, sandstone, shale, and clay—which harken back hundreds of millions of years to Gondwana, the first supercontinent. These ancient soils, combined with towering mountains, valley slopes, and cooling coastal breezes, offer a smorgasbord of winemaking possibilities in one of the world’s most biodiverse environments.

Most of the winelands fall within or border the Cape Floral Kingdom, one of just six floral kingdoms worldwide. A bona fide naturist’s nirvana, with more than 9,600 species of South African plants (69% of which are endemic), it’s the smallest yet richest botanical area on the planet, comprising less than 0.5% of Africa’s area but home to nearly 20% of its flora. It’s also the only such kingdom found entirely within a single country.

South Africa’s cornucopia of natural attributes is on especially dazzling display in Franschhoek (“French Corner” in Afrikaans), one of the winelands’ most achingly picturesque destinations. Formerly known as Olifantshoek (Elephants’ Corner) for the elephants that ambled into the valley to calve centuries ago, it was founded in 1688 with the arrival of some 175 French Huguenots, who were among the hundreds of thousands who fled religious persecution in their homeland by the Catholic Church at the end of the 17th century. Settling in the Drakenstein valley, they were warmly welcomed by the Dutch authorities, which shared their Protestant faith and applauded their abilities as gifted farmers and craftsmen.

Thanks to their knack for viticulture, winemaking began to flourish almost immediately, laying the foundation for an industry that would grow steadily over hundreds of years. Today, throughout Franschhoek’s verdant valleys, sheltered by the Drakenstein and Wemmershoek Mountains and blanketed in fields of lavender and plum blossoms, the influence of Franschhoek’s early settlers looms large: the spellbinding landscape is studded with sprawling Dutch Cape colonial-style wine farms—many of which still bear French names—that gleam a brilliant white in the African sun.

Long renowned for its Sémillon, of which it has some of the oldest vineyards in the country, Franschhoek is also home to 24 producers of Méthode Cap Classique, South Africa’s premium sparkling wine, which is produced the same way as its famous French counterpart—with a second fermentation in the bottle to create its beloved bubbles. A glass of MCC, as it’s commonly called, is a fitting way to kick off a meal in Franschhoek, which, thanks to its ever-evolving array of exceptional restaurants, has earned an enviable reputation as the country’s culinary capital.

Beyond its storied beginnings and lofty status as one of the African continent’s crown jewels, Franschhoek also holds a notable place in recent South African history. On February 11, 1990, Nelson Mandela emerged from Drakenstein Correctional Centre on the town’s outskirts a free man after 27 years behind bars, where a throng of thousands greeted him as he walked hand-in-hand with his wife, Winnie. A bronze statue of Mandela, his fist high in the air, now presides over the prison entrance.

Some 35 minutes west of Franschhoek, linked to the Drakenstein Valley by a hair-raising road aptly named the Helshoogte (“Hell’s Heights”) Pass, lies Stellenbosch, the center of the South African wine industry. Founded in 1679 along the banks of the Eerste River and South Africa’s second-oldest European settlement after Cape Town, “Stel’s bush” is named for Simon van der Stel, the first governor of the Cape Colony. A keen oenophile and viticulturalist, he beautified the surrounding farmsteads by planting thousands of vines and scores of oak trees—a legacy evidenced by the English oaks that still tower above many of its quaint streets. Stellenbosch was the first town to establish a formal wine route, with some 150 wine farms, ranging from historical manor houses to modern tasting rooms.

The route, one of the country’s top attractions, is now divided into five sub-routes according to location. Fans of cabernet franc and pinotage might start at Simonsberg, a mountain rising over 4,500 feet above sea level between Stellenbosch and Franschhoek, and surrounded by 25 wineries. Meanwhile, the combined mountain/maritime climate in Helderberg, whose vineyards are nestled on gentle slopes between fynbos-clad peaks and white-sand beaches, helps to produce the best cabernet sauvignons in South Africa.

A distinctly different terroir resides high in the hills above Hermanus, the seaside enclave 90 minutes southeast of Cape Town that’s widely regarded as the whale-watching capital of the world, where from June to November, hundreds of southern right whales gather to calve and mate.

If you stand in the right spot in the Upper Hemel-en-Aarde and gaze southwest, the evergreen-lined valley seems to form a tunnel, with the ocean visible at the end. You can almost visualize the cold breezes that blow straight in, lending a subtle salinity to the vintages produced closest to the sea. The vines here have to burrow through stony, shale-derived soil to reach the moisture-rich clay underneath, imbuing them with a hardiness that helps create wines that express the complex character of a pristine paradise where the vineyards seem to touch the sky.