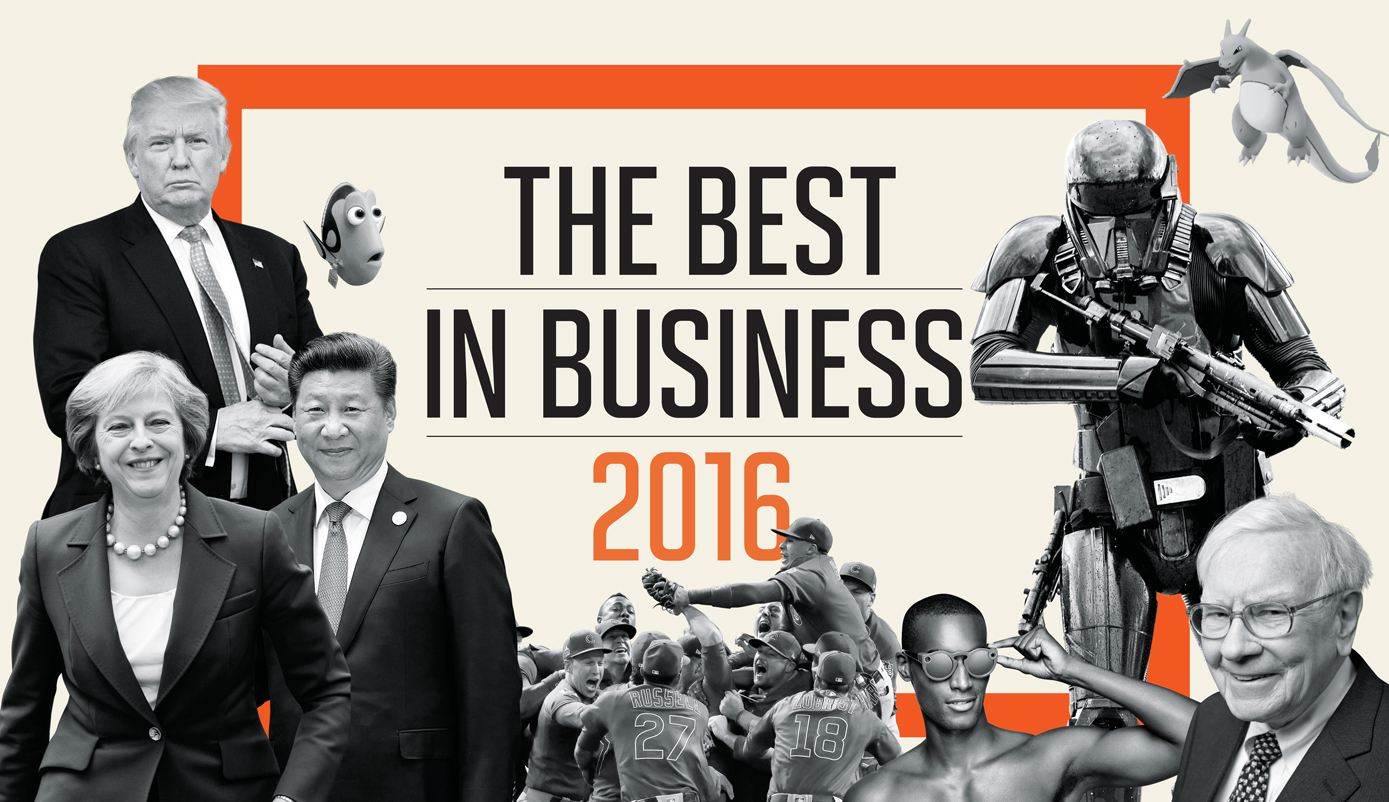 This year has been one for historic contests: Donald Trump vs. Hillary Clinton, Brexit vs. Bremain, Cubs vs. Indians. Amid the fracas, a few business leaders and companies stood out as particularly successful, or at least consequential. Here, Fortune’s roundup of the winners—and a few losers—in a tumultuous year.

Berkshire Hathaway (BRK-A) chief Warren Buffett, the legendary investor who purchased his first stock at age 11, is still at it. Buffett’s net worth increased by about $9 billion in 2016 through late November—more than any other billionaire, according to Bloomberg estimates—as Berkshire’s returns handily beat the S&P 500. Other big gainers: casino magnate Sheldon Adelson, fracking proponent Harold Hamm, and Amazon’s (AMZN) Jeff Bezos. As the site continued its march toward online shopping domination, Bezos’s net worth rose by a cool $8.6 billion.

❶ Warren Buffett
+$9 B
Net worth: $71.3 B
Berkshire Hathaway bested the market (again) this year.

▪ Best performing stocks of the S&P 500
A chipmaker, a gas company, miners, and … Urban Outfitters

Nvidia (NVDA), a leader in computer graphics chips, applied its expertise to growing industries like AI, self-driving cars, and cloud computing in 2016. The stock skyrocketed 161.5%, more than any other, through November 15. Other top stocks included two mining companies, a natural gas giant, and ever-fashionable retailer Urban Outfitters (URBN).

In a busy year for M&A, if not quite as busy as record-breaker 2015, AT&T (T) CEO Randall Stephenson proposed the biggest combination of all. AT&T offered $107.9 billion (including debt) for entertainment giant Time Warner (TWX). Bringing HBO, CNN, and the hit-making movie and TV studio Warner Bros. into the fold would allow Stephenson to gin up new Internet services to appeal to the 20 million cord-cutting households, while diversifying his company’s revenue. But in a year that did break the record for busted deals, regulators may block the merger—even Donald Trump said it concentrated too much power in the hands of too few. —Aaron Pressman

The telecom giant’s long, ugly history of labor strife took another dark turn in April, when 40,000 workers in the company’s telephone and Internet businesses walked off the job after a year of fruitless contract talks. Secretary of Labor Tom Perez had to bring the sides together to end the strike, the largest in five years. The truce they reached, after seven weeks: Workers got higher pay, Verizon (VZ) got health care savings. —A.P.

Between CRISPR gene-editing and cancer therapies that harness the immune system, 2016 had plenty of innovation. But one of the most promising trends is progress in the actual delivery of drugs to the body. That includes a newly approved implant from Braeburn Pharmaceuticals that can treat opioid addiction for six months, and Medtronic’s “artificial pancreas,” now cleared as a treatment for Type 1 diabetes. —Sy Mukherjee

Disney (DIS) became the biggest movie studio on earth this year in terms of revenue. It followed up a huge 2015 (see: Star Wars) with the largest one-year box office haul in Hollywood history, smashing Universal’s $6.9 billion sales record in 2015. Disney’s hits this year include three billion-dollar blockbusters, with a hotly anticipated Star Wars spinoff, Rogue One, due in December. —Tom Huddleston Jr.

Brazil’s economy is barely limping out of a three-year recession, but in 2016, a year in which the country also saw Zika, Ryan Lochte’s gas-station episode, and the impeachment of its president, its stock market crushed it. Brazil’s benchmark climbed 49% through late November. Thank a commodities rally, confidence in the new political order, and a low starting point. —Erika Fry

Move over, Martin Shkreli. This year, pharma got a new villain, sparking a scandal contentious enough to make Shkreli’s Daraprim price hike seem bush league. Under CEO Heather Bresch, Mylan (MYL) jacked up the price of the widely used EpiPen (the shot that saves the lives of people who are deathly allergic to peanuts and more) by 500%. The ensuing nationwide scandal enraged Congress, presidential candidates, and investors—who sent the company’s stock plummeting. Regulators eventually compelled the company to pay the government a $465 million settlement. —Jen Wieczner

After an election cycle where the opposing sides seemed to disagree on everything—including the veracity of basic facts—the sad term “post-truth” was named the Oxford Dictionaries’ word of the year. The phrase’s monthly usage shot up 2,000% over last year, according to Oxford’s count.

■ Best/worst craze: Pokémon Go
After the most successful app launch ever, it led millions to risk trespassing and traffic accidents to chase imaginary monsters.

■ MVP and LVP
Viewers tune in for Cubs’ epic win, tune out the rest

More than 40 million people watched the Cubbies end their 108-year championship drought—at the expense of the also title-hungry Cleveland Indians—in Game 7 of the World Series, the most watched baseball game in 25 years. Other live sports fumbled, however. NFL ratings sank, and Olympics primetime viewership dipped 17%. Blame a nail-biter of an election and YouTube-addicted millennials. —Tom Huddleston Jr.

In recent years, metals were hit first by the global financial crisis and then by the slowdown in China. These forces caused miners to drastically cut supply, but the sector’s extraordinary rebound this year shows that they overcorrected—leading to price-­boosting shortages. —Chris Matthews

Zinc won gold as the best per­forming com­modity in 2016. It leapt 60.4% through November, joining other metals like lead and copper with double-digit gains.

For financial markets, 2016 has been the year that cried wolf. It started with a scare about a “hard landing” for the Chinese economy as GDP growth dipped below 7% for the first time since 1989. But Beijing managed to quell fears by lifting deficits, loosening credit, and indulging in some perhaps overly sunny accounting. Next up was the shock of the June Brexit vote. The S&P 500 quickly lost 5.5% in the next two days, but rebounded with a vengeance once markets realized the volatility would keep the Fed from raising interest rates. Finally, there was the shortest-lived scare of all: Stock futures tanked on election night as the results came in for Donald Trump. But within hours, fears of trade wars and other maverick economic policies gave way to hopes for less regulation, lower taxes, and higher government spending. Only a curmudgeon would point out that China’s debt metrics are now even more terrifying, that Brexit is an unholy mess, and that Trumpian reflation means, most likely, the return of inflation. The S&P, DJIA, and Nasdaq don’t seem to mind: They’re at record highs. —Geoffrey Smith

"To all the little girls watching…never doubt that you are valuable and powerful & deserving of every chance & opportunity in the world."

This postelection missive had more retweets (over 600,000) and “likes” (over 1 million) than anything else on Twitter in 2016, according to Favstar.

Wells Fargo’s (WFC) fake-account scandal cost the bank $184 million in fines, lost the CEO his job, and savaged its stock. But as for the phony accounts themselves? Settlement details suggest the bank collected only about $2.5 million in ill-gotten fees. Making for a fraud that, as far as bank scandals go, was shockingly unremunerative.

The last of China’s big state-owned lenders to list a portion of their shares publicly, Postal Savings notched the largest IPO since 2014. But as with those other banks, the shares have mostly gone nowhere, weighed down by traders’ skepticism of balance sheets saddled with shaky debt. —Scott Cendrowski