Bar Carts Are Back: How This Revival Is Different 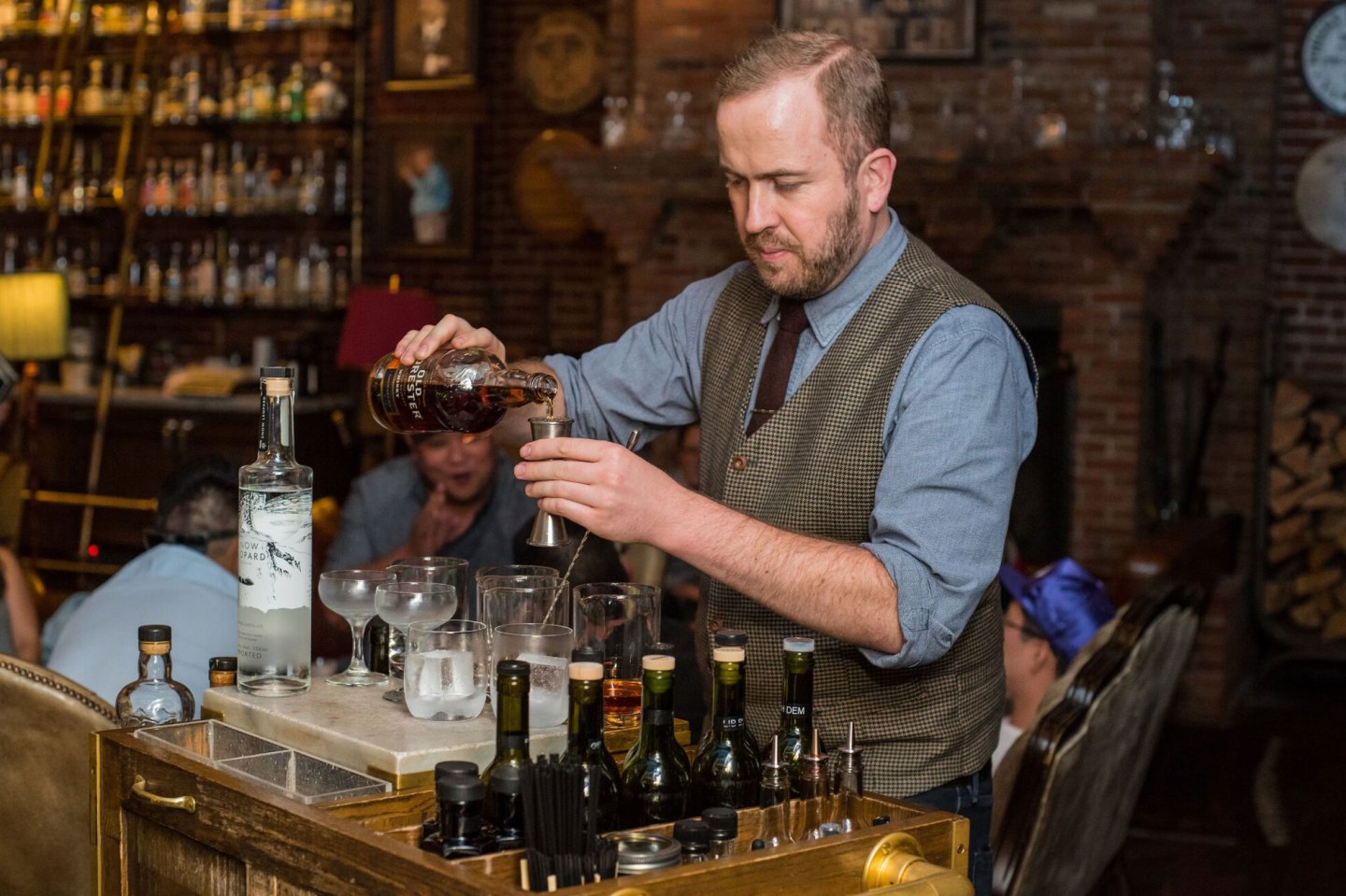 During brunch at Denver’s Safta, a cart full of colorful bottles turns heads as it rolls by. The bright orange slices on the cutting board, green fragrant fresh mint, and deep-purple blackberry purée gleam like a stoplight of drink ingredients. Or, more accurately, a sign to go ahead: Order another drink and settle in for a show when the bartender wheels the restaurant’s spritz cart to the table to make drinks right in front of customers.

It’s been a few years since the bar cart—the art of preparing cocktails tableside—last made a “comeback,” filling space in trend pieces of glossy magazines. But today’s revival loses the staid shelves of dull-colored drinks making their way through the restaurant—the amaro or port carts, rolled around after dinner. Places like Safta, as well as Ben Paris in Seattle and Multnomah Whiskey Library in Portland, Ore., are looking to liven up the dining room: sometimes with color, but mostly with action, mixing the drinks tableside to the specifications of each customer and bringing the interactivity of craft cocktails out from behind the bar.

It’s akin to having a personal bartender at your table, explains Kyle Sanders, the general manager of Multnomah Whiskey Library. When owner Alan Davis set up the renowned brown-spirits spot, he looked at the seating—which involves lounge tables—and worked out the carts as the best way to bring bartender-focused cocktails to customers. “It’s a more personal experience,” says Sanders. “The person who takes your drink orders is also your bartender.”

That leads to more people asking questions and interacting with the staff. Multnomah offers pretty much any stirred cocktail from its menu via one of the four carts on the floor. But the bestseller is the Old Fashioned—typically made of muddled sugar, bitters, whiskey or brandy, and an orange peel—which he estimates accounts for 15,000 to 20,000 orders each year. But with the cart, those aren’t all the same: “People ask questions about bitters, simple syrups, and the vermouths that we offer,” he says, adding they can have a conversation about what will go into their drink. “It’s more fun for guests to see everything going on.”

For Safta, those questions from the diner are also a big plus with cart service. “It’s the showmanship that gets not just the table that’s ordering excited, but everyone else in the room interested,” says Chris Rogers, the restaurant’s beverage manager. Safta, which specializes in foods inspired by the culinary landscape of Israel, comes from restaurateur Aron Shaya of New Orleans’s Saba, runs the spritz cart only during brunch on the weekends so far, but it has really taken off, and he hopes to expand it. “It’s more interactive, more approachable,” Rogers explains. He had previously worked with a grappa cart on other jobs, but he says the action makes a difference. “With other types of carts, there’s an air of fine dining, but with this it’s so casual,” Rogers says, adding it makes customers feel comfortable asking questions, making changes, and personalizing drinks: “It’s their experience.”

While Rogers took inspiration from his previous jobs and Sanders says Multnomah was inspired by old-school British styles of service, Abigail Gallo took her cart concept from a place much closer to home. The beverage manager of Ben Paris in Seattle recalls the bar cart that her grandparents had when she was growing up. “I learned that I liked my Manhattans different than my grandpa,” she says, laughing at the lessons she learned from his personal bar cart—and how having everything right there allowed everyone to enjoy his or her own style of drink. Gallo incorporated the imagery from her grandparents’ lives—in Seattle and elsewhere—to bring a mid-20th-century vibe to her cocktails. She designed the Three Martini Lunch—three shot glasses filled with mini martinis—as a play on the old tradition and Eleven Madison Park’s roll-up frozen martini service. Gallo describes it as “everyday fancy, an homage to high-end.”

Ben Paris rolls out various carts at different times as long as a minimum of four people are ordering a cocktail. (If you want something specific rolled out, like the punch cart that usually runs at brunch, Gallo recommends mentioning it in your reservation.) The most common order at the Pacific Northwest restaurant is the Gin Griffey Juniper, a Spanish-style gin and tonic. The cart comes around with gin options, a tonic selection, and various garnishes, mixed to order at the table.

And it’s that tableside service—that special focus on the diner—that has made the carts so successful. “It really makes them feel special, like the center of attention in the room,” Gallo says—something, she jokes, that is new to Seattleites. But more than anything, Gallo sees it as part of the next wave of craft cocktails, one in which people want to be involved: “It’s a cocktail culture that people are free to get nerdy about.”

—Canned vs. bottled: Which type of wine is more sustainable?