The region has become a preeminent wine destination down under over the past few decades.
BYShana Clarke
June 15, 2019, 11:30 AM UTC 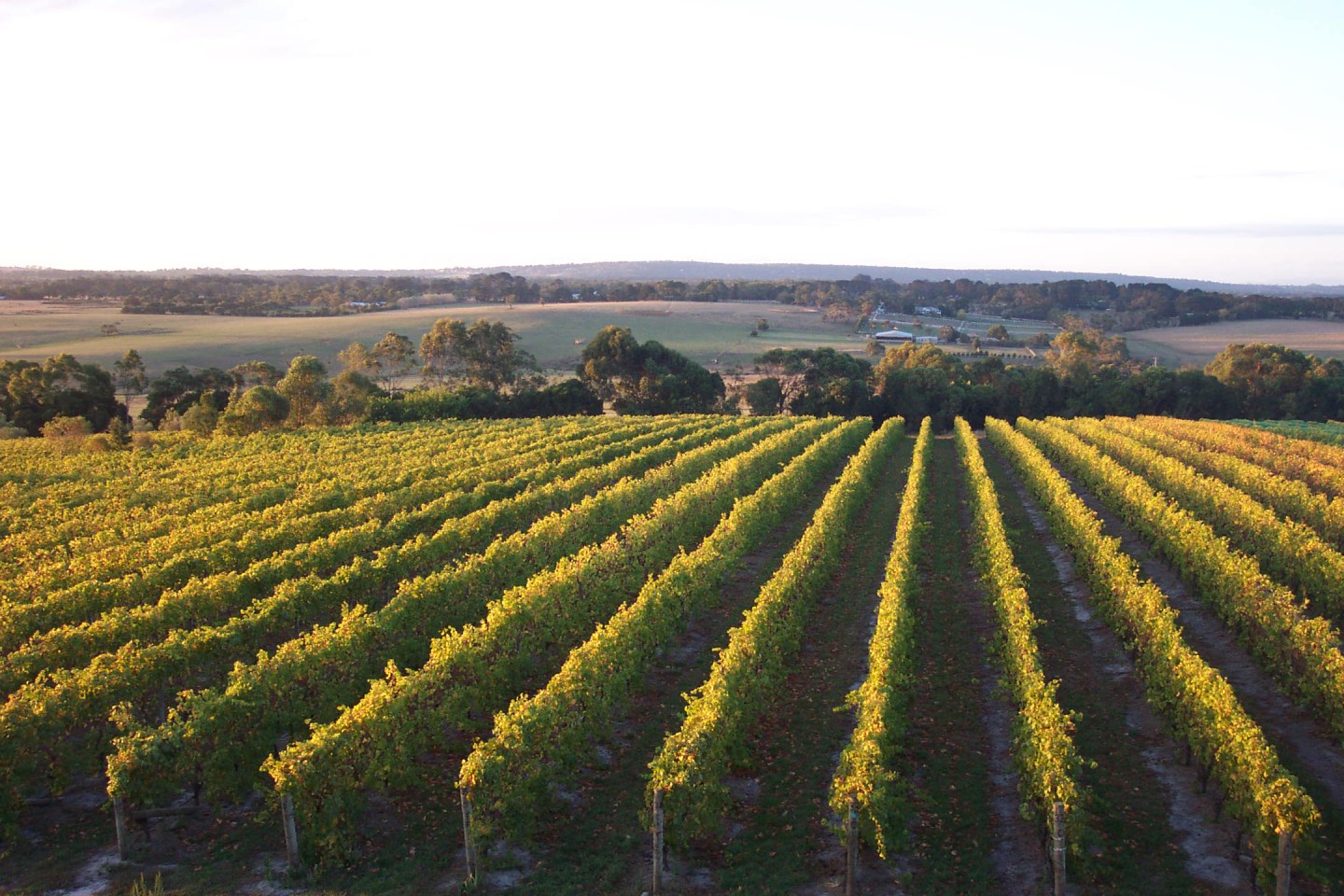 Drive about an hour south of Melbourne, and the Australian city’s energy soon gives way to mellow seaside vibes. The Mornington Peninsula—with its oceanfront homes, upscale hotels, and fine restaurants—conjures up the Hamptons, the Côte d’Azur, or any other wealthy vacation enclave.

But come June, when winter approaches in the Southern Hemisphere, the influx of tourists doesn’t dissipate. Over the past few decades, the region has become a preeminent wine destination down under, luring vacationers year-round with elegant tasting rooms, plush accommodations, and distinct Pinot Noir and Chardonnay varieties.

The Mornington Peninsula’s wine country is relatively new; vines were first planted in 1972, and a wave of aspiring winemakers created the fairly robust beginnings of a wine industry in the 1980s. Cabernet was the grape of choice at that time, as winemakers thought their climactic situation was similar to Bordeaux’s.

“Cool-climate viticulture was a really new thing in Australia, and there wasn’t a lot of expertise with regards to it,” says Kate McIntyre of Moorooduc Estate and a Master of Wine, a qualification issued by The Institute of Masters of Wine in the United Kingdom. “So we got really bad early information. Dad really wanted to grow Chardonnay and Pinot Noir, and so, against the advice that he’d been given by the experts, he planted a bit of both. Thank goodness,” she laughs.

Winemakers soon realized that the cooler climate, largely affected by the bodies of water surrounding the peninsula, was better suited to popular Burgundy varieties.

“The temperamental maritime climate means that our wines are always a product of each vintage,” says Mike Aylward, who started his own label, Ocean Eight, after his parents sold the family winery in 2004. “We do not make generic wines. Each year has its own challenges, which means we are always learning.”

Convincing a region of winemakers—who already put a great deal of faith in full-bodied Cabernet and Shiraz—that Pinot Noir and Chardonnay were the right direction for the peninsula took a bit of work.

“Most of the drinking public didn’t really get a chance to access the great Burgundies back then, and the people who did were very much of the opinion that we’d never be able to make wine like that in Australia,” McIntyre explains. “I think they were right to a certain extent. We don’t want to make facsimile Burgundy in Australia. But what they got wrong was that they thought that was the only way you could make good Pinot.”

McIntyre points to other major wine regions, such as Oregon and New Zealand, that have embraced Pinot Noir and Chardonnay grapes, understanding them through a Burgundy lens, but crafting a style uniquely their own.

The region’s idyllic setting has lured wine lovers seeking second careers, or a slower pace of life, and many turned to winemaking. Although this new community of vintners was criticized for being “hobby winemakers,” the collective brought other skills to the burgeoning wine region; many were scientists or doctors during their first career go-rounds and applied their collective knowledge to viticulture.

Today, the Mornington Peninsula Vignerons Association, a coterie of winemakers in the region, is running concurrent studies on a number of viticultural issues. A key focus has been a deep dive into Pinot Noir grape clones and how they respond to different soils, expositions, and climatic variances.

“There’s been a concerted effort to do research within individual vineyards across the region, to better understand the microclimates of different vineyards and to explain why we’re a good region particularly for Pinot Noir,” McIntyre says. For over 10 years, the MPVA has also been conducting an analysis of water quality across the peninsula in different water catchments, dams, and streams that feed into and are used by vineyards. Finally, as instances of phylloxera—a vineyard disease that has been responsible for wiping out entire wine regions throughout history—have been discovered in other parts of Australia, studying rootstock and phylloxera-resistant vines is of high importance.

The vast majority of wineries are still family owned and family run. Larger corporations haven’t invested in the Mornington Peninsula for a myriad of reasons. Existing plots are small; the average size of a vineyard in this area is 3.9 hectares (9.6 acres)—compared to Australia’s Barossa Valley, where the average vineyard size is 17.6 hectares (43.5 acres). Furthermore, a scarcity of land means there isn’t much room to grow.

Grape prices also deter companies seeking to create a scalable business. One metric tonne (1.1 U.S. ton) of Pinot Noir grapes in the Mornington Peninsula is worth AUD $3,266 (U.S. $2,278) on average, compared to AUD $2,078 (US $1,450) in the Yarra Valley, another Australian region known for Pinot Noir. In turn, the wines themselves are pricey: $50 to $80 a bottle on average. And most companies, according to McIntyre, are looking for the “sub-$20 stuff that they can pump out and that keep the majority of the drinking public happy.”

But don’t mistake family owned for down-home. The region has long been a destination for wealthy urban-dwellers, and the growing influx of visitors to the wineries has spurred a new luxury wine tourism infrastructure. “Wine tourism has been huge and vital for the success of the business and the region as a whole,” says Sam Coverdale of Polperro Wines. “In the last five years, it has grown exponentially.” Coverdale knows firsthand; his property operates not only a cellar door (the Australian term for tasting room) but also a restaurant, bar, and bistro. The estate also houses four villas and will soon open a three-bedroom farmhouse for guests, renovated by renowned design firm Hecker Guthrie. Down the street, Polperro operates HotHut Yoga studio, adding further to the wine country vacation experience.

At the Jackalope Hotel, a design-forward aesthetic means that commissioned sculptures and artwork from some of Australia’s preeminent artists dot the vineyard landscape and hotel. An ideal day could encompass a morning run through Willow Creek Vineyard, followed by a tasting of the wines themselves at Rare Hare, the on-site cafe and cellar door. Follow an afternoon spa session with the high-end tasting menu for dinner at the on-site restaurant, Doot Doot Doot, served under a ceiling of undulating bulbs that are meant to evoke wine’s fermentation process.

Winery and restaurant Ten Minutes by Tractor’s highly decorated wine list features not only the estate’s proprietary wines but also an extensive menu of global offerings—especially Mornington Peninsula’s kindred spirit, Burgundy. Although the main restaurant is in repair after a fire, diners can still enjoy French bistro-inspired fare in the solarium at the restaurant’s offshoot, Petit Tracteur Bistro.

While the beach and surf continue to lure vacationers during the summer months, the Mornington Peninsula’s wine industry now calls to visitors in its own right. The constant developments in viticulture practices continue to express themselves in the wines and bring greater prominence and accolades to this cool-climate region.

— Puglia is Italy’s new hotspot for luxury and wellness retreats