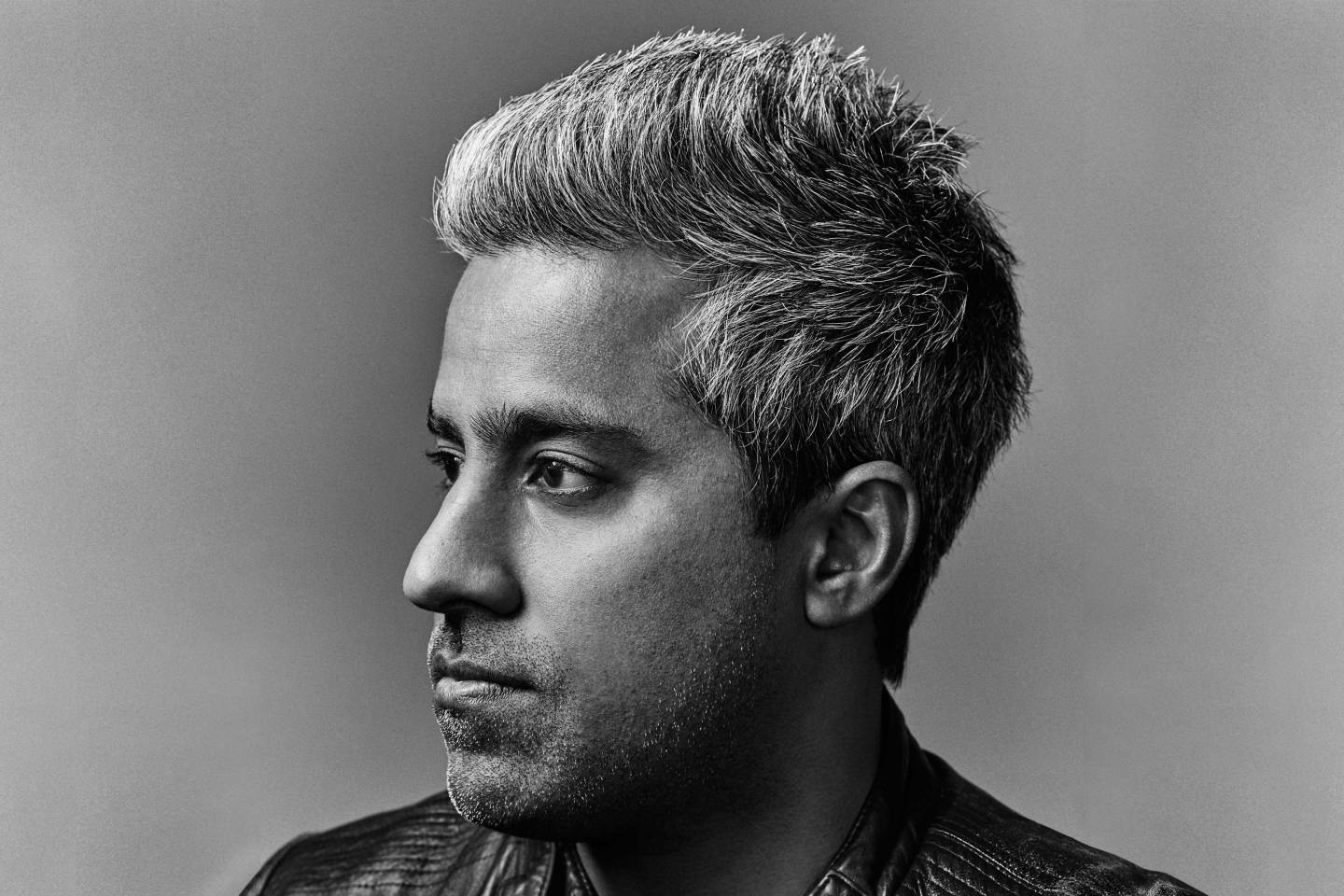 The setting is ironic for a late-afternoon cocktail with Anand Giridharadas, the self-appointed scourge of well-meaning plutocrats everywhere. The author of the biting 2018 book Winners Take All: The Elite Charade of Changing the World has suggested the bar at the Big 4 Restaurant in San Francisco’s Huntington Hotel, where he is staying. And so we sip drinks amid the dark wood paneling and white tablecloths of a redoubt that quietly screams plutocracy. Oil-painted portraits of two of the bar’s namesake 19th-century railroad magnates, Leland Stanford and Mark Hopkins, gaze down sternly at us as we discuss what Giridharadas believes to be the pernicious impact of the 21st century’s own robber barons.

The villains in Giridharadas’s tale live in a land Fortune readers will recognize. He calls it MarketWorld, a place where any problem can be solved by market forces—including issues involving public health or primary education, which common sense suggests only governments or massive publicly funded institutions can possibly tackle. Giridharadas thinks the MarketWorld ethos enables those in charge to convey a sense of sacrifice while comfortably calling the shots, thereby preserving their place at the top. When a big company donates thousands of computers to public schools while lobbying to squelch tax hikes that would keep those schools funded, that’s MarketWorld in action. “I felt there was a phenomenon of the people who benefited most from the last four decades entrenching their monopoly on the future,” he says, “by claiming to be leading the charge to fix our biggest shared problems.”

His list of privileged culprits and their enablers is long. These include for-hire “thought leaders,” as distinguished from nobler critics; philanthropists and “impact” investors who prescribe fixes for their benighted beneficiaries without asking how they’d like to be helped; and the merry band of attendees of what he calls the “TED, Davos, and Aspen conference circuit” who reinforce one another’s rarefied conceptions of goodness. Where others see noblesse oblige, in other words, Giridharadas spies disingenuous self-dealing.

Giridharadas knows his subject because he’s a full-fledged member of the club. Indeed, the 37-year-old journalist is that most dangerous form of critic, the insider who bites the hand that feeds him. An Ohio native with a vertical shock of salt-and-pepper hair, Giridharadas checks all the boxes of the global elite. Educated at Harvard and launched into the working world as a consultant at McKinsey, he has given two TED Talks, was a Henry Crown Fellow at the Aspen Institute, and is now an editor-at-large for Time magazine. He gives paid speeches and attends swell parties, rubbing shoulders with the one percent. He is prolific on Twitter, naturally, and is quick with substantive rants as well as pithy put-downs like “Plutes be pluting.” His arguments resonate with other idealistic insiders (some of whose crises of conscience he recounts in Winners Take All), even if those arguments aren’t changing the practices of those insiders’ employers.

He’s got no issue per se with well-heeled do-gooders trying to change the world. His beef is with how rich and influential people and corporations bestow their gifts and the implications for governmental organizations that could otherwise have far greater impact. Elites, he says, are happy to help so long as the results are a “win-win”—provided that the benefactors themselves don’t suffer, whether from higher taxes or from policies that would restrain rapacious behavior. But Giridharadas argues that the only way to solve society’s biggest problems is for “some people to do worse”—a solution for which the privileged have little or no appetite.

Few escape Giridharadas’s ire. Former President Bill Clinton gets most of a chapter in Winners Take All for his now defunct Clinton Global Initiative conference, which offered a platform for the powerful to promote pet philanthropic projects, regardless of their past misdeeds or the merits of their proposals. Pious tech leaders particularly bother Giridharadas—precisely because they wield power under the flag of idealism. Each has a self-serving narrative, he argues: “Uber just wants to create micro-entrepreneurship in America. Google just wants to organize all the world’s information. Facebook just wants to build a universal community of mankind. And I really think they believe it … Our society is way more defenseless against the idealists than the realists. We don’t regulate the idealists well, because to some degree we are sucked in by their story.”

Research for his book predated the rise of left-wing Democrats like Alexandria Ocasio-Cortez, with whom he clearly sympathizes. And Giridharadas doesn’t much dwell on Donald Trump, with whom he clearly doesn’t. If anything, he’s fed up with both U.S. political parties. He blames Republicans for having denigrated government for decades, though he gives them points for transparency. “It has been one of the most successful intellectual campaigns in the history of the world,” he says. “It spread globally as a kind of theory in which government is bad and entrepreneurs are the only good thing.” But he reserves special scorn for Democrats who have bought into anti-government orthodoxy: “You have Obama creating the Office of Social Innovation and Civic Participation. The founding charter says that top-down programs from Washington don’t work anymore. Really? Barack Obama only could vote because of a top-down program from Washington”—the Voting Rights Act of 1965—”that worked pretty well.”

Why pick on rich people and companies that sincerely are trying to help? When “the modest act of do-gooding abets harm-doing on a much bigger scale, the net effect of the do-gooding may be negative,” he retorts. An example he cites is the attention paid to Mark Zuckerberg’s philanthropy even as journalists were slow to catch on to Facebook’s data-privacy misdeeds. “If you took away all of the coverage that resulted from that moral do-gooding,” he says, “I think the guy would have been busted by journalists and regulators, like, eight years ago.” Goldman Sachs, guilty according to Giridharadas of helping cause the Great Recession, runs an initiative called 10,000 Women to help women entrepreneurs. “If they really loved women that much, they would have not done what they did in the financial crisis, which hurt way more than 10,000 women,” he says. Philanthropy can “douse public anger,” he argues, which in turn “prevents public action that would really make lives better.”

Some plutocrats get off easier than others. Giridharadas has kind words, for instance, for Bill Gates, notably the work his foundation has done in Africa, where some governments don’t have the capacity to solve intractable problems. But all the same, Giridharadas questions the power that wealth confers on Gates and his ilk, particularly in the U.S.: “I really don’t think the Founders envisioned you setting public policy agendas at the level that someone like Gates does. That was one of the objections that a hundred years ago used to be much more common, which is, ‘Who are these people to make decisions about public life?'”

The century-old objections he is referring to gave rise to the Progressive movement, a direct reaction to the political power amassed by the Dead White Men on the walls of the Big 4’s bar. The critic clearly yearns for a similar development, a time of muscular governing to help the needy and to rein in the powerful. For now, the portraits of those plutocrats—and the position of their successors—remain firmly in place.

A version of this article appears in the September 2019 issue of Fortune with the headline “An Insider Takes Aim at ‘The Elite Charade.’“

—Fortune Change the World 2019: See which companies made the list
—America’s CEOs seek a new purpose for the corporation
—Someday, Apple may make your new iPhone out of pieces of your old iPhone
—Change the World 2019: Companies to watch
—Q&A: Walmart CEO Doug McMillon on automation, the tragedy in El Paso, and more
Subscribe to Fortune’s CEO Daily newsletter for the latest business news and analysis.