A Brief History of In-Flight Meals 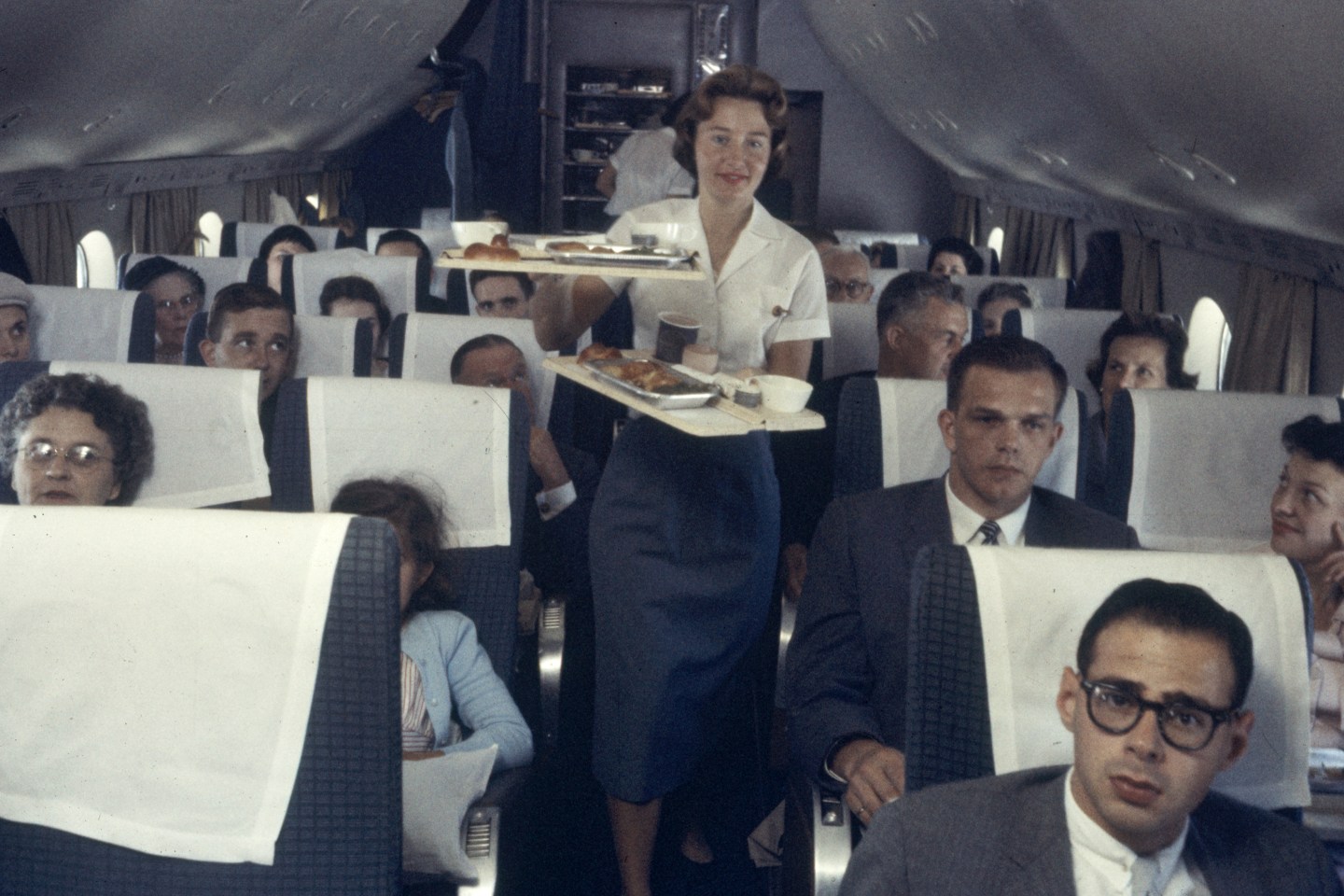 Although not renowned for their excellence in culinary circles, in-flight meals are a relatively recent privilege to which fliers haven’t always been treated. The first ever airline meal was served in 1919 on a Handley-Page flight from London to Paris. According to Travel + Leisure in 2017, selections at the time “typically included cold fried chicken, fruit salads and elegantly composed sandwiches, served in wicker baskets on the lightest chinaware servers could find.”

As technology propelled planes’ capabilities further, fliers witnessed the arrival of on-board kitchens in the 1930s, which turned the food offerings from mere sustenance to more thought-through experiences. According to Richard Foss, a culinary historian and author of Food in the Air and Space: The Surprising History of Food and Drink in the Skies, told Travel + Leisure that “sometimes planes would even stop off for lunch, serving customers in the airline hanger or at picnic tables while the plane refueled before continuing with the remainder of the trip.”

It was in the 1940s when frozen meals began making their way into the geometric trays we consider familiar today began to take shape. A variety of methods to save time when serving began to take hold, including the discarding of glassware for plastic, cutting off the need for the crew to wash dishes. The ability to freeze food and serve it hours later eventually led to more menu choices—a fact that, paired with lower flight costs, shifted even more focus on the ways the food was being prepared and served on board.

Which brings us back to today: Newer, lavish meals thought up by celebrity chefs in partnership with airlines, a greater focus on health globally, a higher frequency of travel, and the advent of the Internet, enabling passengers to to publicly review their on-board experiences (a trend that ends up affecting ticket sales). Take all that together and expectations placed upon airline meals are higher than ever before.

There are probably a dozen well-known companies with dedicated catering services for airlines, estimates Mariya Stoyanova, director of product development at JetBlue Airways. “They work out of warehouse-like facilities, but are very well organized to produce food specifically for airlines,” she says. The catering services hire expert airline chefs to work out menus, produce the meals in-house, and deliver them across their region obeying the many laws and guidelines that dominate the flying industry.

One of the world’s largest providers of in-flight catering and services is LSG Sky Chefs. Working with JetBlue, American Airlines, and Delta, among others, LSG Sky Chefs’ “primary business function is to prepare and deliver meals, beverages and snacks to aircraft for domestic and international flights,” according to the company’s website.

In drafting a menu, chefs are hyper aware of the effect that altitude and air pressure have on fliers’ taste buds. The air pressure in cabins climbs to 6,000 to 8,000 feet above sea level, which makes the preparation of fresh meals on-board nearly impossible and also mutates the flavor of the pre-packaged food that is being served. Taste buds and the sense of smell go partially “numb” given the altitude, indirectly requiring food purveyors to add kicks of flavor that fare consumed on the ground doesn’t call for.

Peppering each meal with extra salt and sauces seems to be common practice. “Your taste buds are not the same in the air,” confirms Stoyanova, before addressing JetBlue’s preferred practices: “We try to bring the flavor forward with fresh herbs, spices, heat, umami—just to make sure it tastes and smells the way it’s supposed to be.”

Alf Pomells, the IT and planning manager for LSG Sky Chefs at London Heathrow between 1994 and 2001, echoes Stoyanova’s point about the surrounding environment: “Taste buds are affected by altitude,” he explains. “So the executive chefs who design the menus are constantly trying to balance improved taste versus the budgeted cost of the meal.”

In budgeting meal costs, Pomells explains, airlines usually set a cost per meal, and the caterer tries to manufacture a meal in line with that cost. “Put too much food,” he continues, “and they lose money, don’t put enough and there will be penalties to be paid—so they are a combination of factory, fast food provider, and food distributor.

Partnering with chefs has become a popular way across these flying couriers to step up the quality of their offerings while remaining within budget and lawful parameters. JetBlue works with the team at New York City’s Saxon + Parole on the airline’s Mint experience, a self-defined “refreshing take on a premium travel experience” featuring “artisanal dining” offerings. Air France once partnered with Joel Robuchon. Singapore Airlines enlisted the help of Gordon Ramsay as a consultant years ago, and Heston Blumenthal was tapped by British Airways back in 2011 for his expertise.

Although the actual food being served is what passengers remember, it is the preparation of said food—a practice highly guarded by industry standards—that determines the “healthiness” of it all.

“Meal components can be brought in frozen and assembled up to 24 hours before a flight,” explains Pomells. “So, once you add the original pre- and storage time for the vendors, some of the food could be 2-3 days [old] before consumption. In order for the carts to comply with food safety standards, they have to sit in a refrigerated area for two to three hours to get down to the required temperature.”

Of course, processes slightly differ across the aisles. Stoyanova urges that JetBlue doesn’t use anything frozen. “Our philosophy is everything needs to be made with fresh ingredients,” she says.”

Pomells advances that the “freshest” meals he’s seen are catered to first and business class passengers, “simply because the numbers are a lot lower.” Those fliers, he says, are entrusted to dedicated teams that hand-prepare all the meals, so it’s the difference between getting “an à la carte meal from a restaurant and getting a meal from a drive-through takeaway.”

Frozen meals, in general, have an uneasy history in the airline industry. “In 1968, the food was very good, mainly due to the fact that the airlines had their own kitchens” says Diana Goo, a former flight attendant at United Airlines from 1968 to 2009. “Now, they are using outside vendors, which takes the control out of the airlines’ hands. In the past, the New York flights had lox from the local delis—it was so good that some of the women stashed it in their handbags!”

Although clearly denouncing some of the practices currently used to provide fliers with foods, Pomells and Goo agree that, overall, in-flight meals abide by some sort of trustworthy health standard. “I fly up to a dozen times a year and, while most food is barely average, it’s better than going hungry,” says Pomells. “So even if it’s just for the energy it provides, the meals are necessary and the quality is improving.” When asked whether she considered the food she served on planes healthy, Goo responds “Yes. I ate the in-flight meals [also], whatever was left over from first class and coach.”

And just how restaurants follow municipal health inspector guidelines but answer those requirements in all different ways with unique menus, airline catering services across the globe produce foods of differing qualities. In the case of air travel, the variation between carriers is usually what people are observing, according to Pomells.

“When you take a flight, you can be catered by two or three different companies, as not all have kitchens in every country, much less every airport,” Pomells says. “The meal you get from Heathrow to Dubai might be great, but your next meal from Dubai to Kuala Lumpur is prepared by a different kitchen, [following] a different menu with different chefs.”

Pomells suggests the best thing to do is always request a special meal based on dietary restrictions. Why? Special meals are ordered closer to take off, making them fresher and closer to the airline chef’s original vision for the menu.