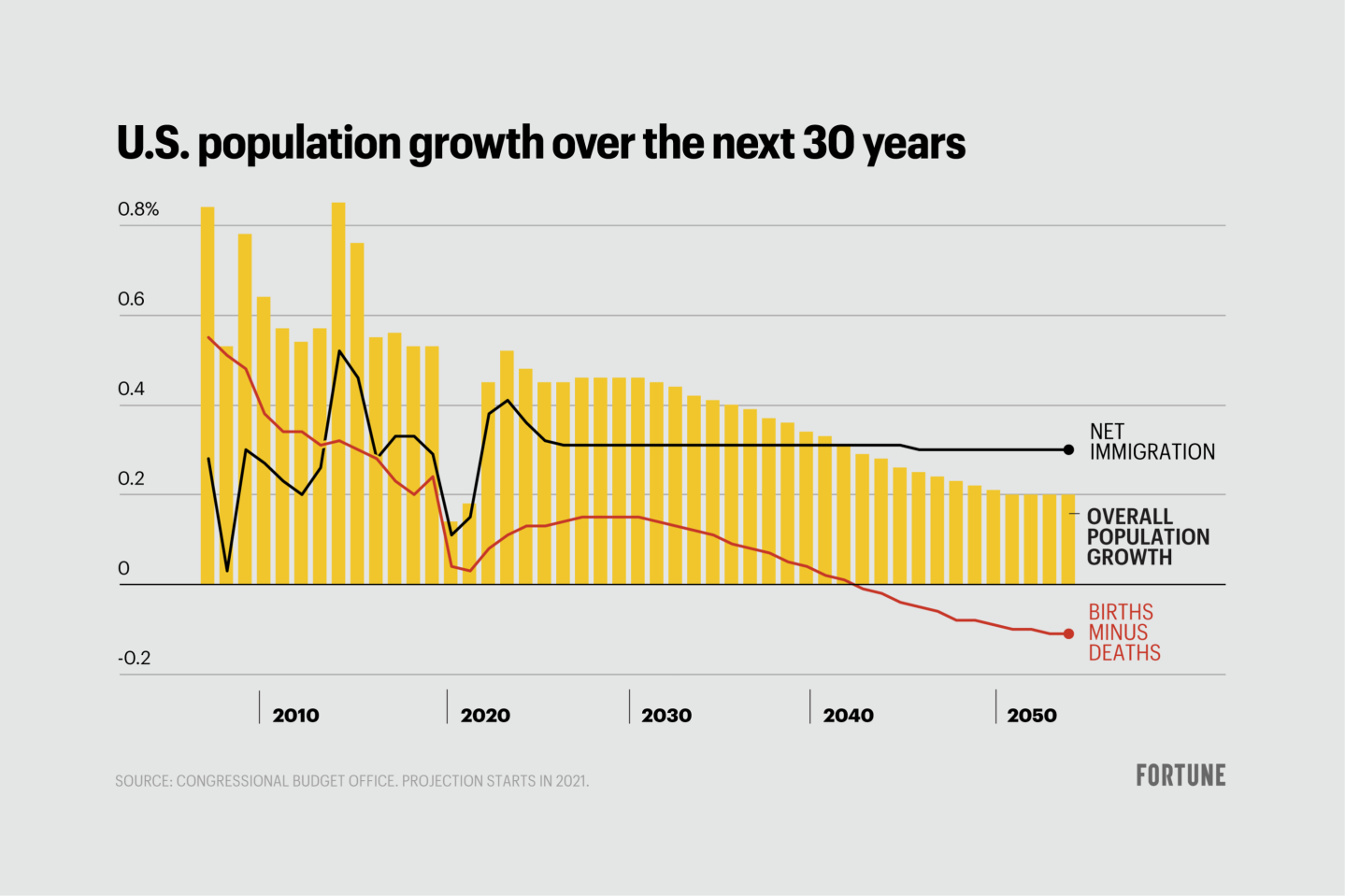 This chart shows U.S. population growth over the next 30 years.

Millennials and Gen Z are less enthusiastic about having children than their parents. The reasons are many: financial, social, and biological, along with the preference among younger generations for “freedom.”

Then, early in the COVID-19 pandemic, there was a short-lived “baby bust,” when conceptions fell slightly. Months later, the rates rebounded but were inconsequential compared to the huge number of daily deaths.

Over the next few decades, demographers expect the population growth to decline further. But there’s one hope for increasing the U.S. population: immigrants.

A report by the Congressional Budget Office (CBO) released Tuesday predicts that the nation’s population will near 373 million by 2053, up by almost 3 million from CBO estimates a year ago. The difference? An increase in immigrants over the next three decades.

Chart showing U.S. population growth over the next 30 years.

The U.S. population is currently 334.3 million.

Over the next 30 years, the CBO projected a decline in births compared to deaths. In isolation, it would mean that the population will fall rather than grow.

But long-term population growth will be “driven by immigration as fertility rates remain below the rate that would be required for a generation to exactly replace itself in the absence of immigration,” the report said.

U.S. immigration rates are swayed by many factors.

William H. Frey, a demographer and senior fellow at Brookings Metro, a think tank, wrote in an analysis of census data earlier this month that government policies and economic trends impact immigration. “In the mid-2010s, the nation saw gains of over 1 million net immigrants from abroad per year. Yet largely because of government restrictions, that dropped to 477,000 in 2019–20,” he wrote.

In addition to immigration patterns, the CBO report also predicted the population will grow older in the coming decades, with more Americans falling within the “65 and above” bracket. This could be why the estimates show deaths overtaking births by 2042.

The CBOs estimates offer some optimism as it still predicts a growth in population numbers, much of which is attributed to those in their prime age, between 25 and 54 years. That segment will grow by 1.1 million annually, which means more individuals in the economy are employable.