My ‘soul is tapped out:’ The pandemic killed my ambition. Here’s how I’m getting it back 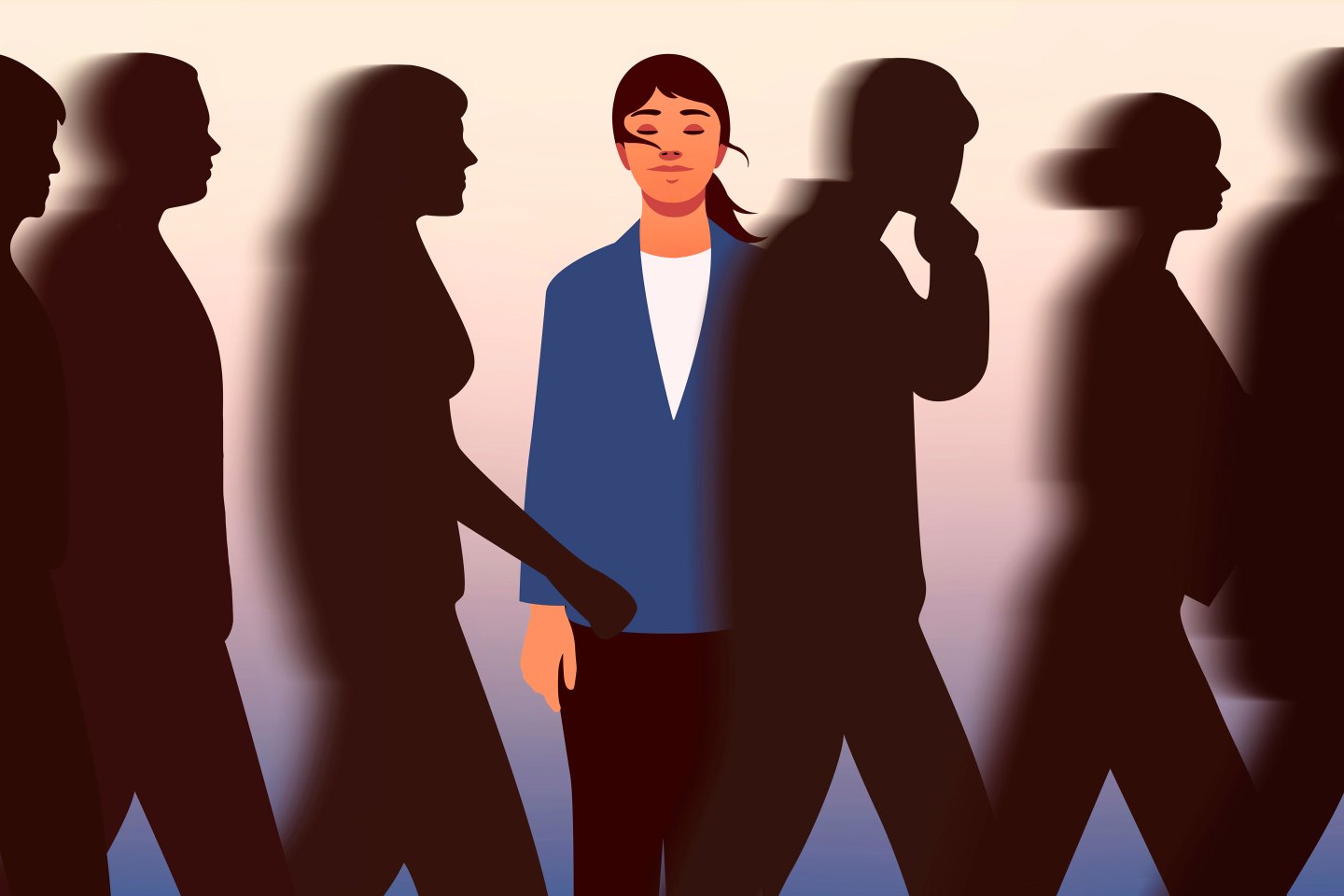 What is life without something to look forward to—something to strive for, something new to learn?
Illustration by Anna Parini

This is the first in a series of stories on how we are reframing ambition in 2023. What does ambition mean to you? Email senior writer Alicia Adamczyk for a future article.

My anti-ambition era started later than some. As a personal finance reporter, I was busier than ever at the start of the pandemic, trying to help people make sense of unemployment benefits, stimulus checks, and health insurance. It was a lot of work, and at times emotionally taxing, but it was also purposeful. It was my way of helping my neighbors during that scary and unstable time, and, in hindsight, it was also extremely fulfilling.

About a year or so into the pandemic, though, things slowed down. The sense of urgency I felt was fading; I found myself logging off earlier to take long walks, and forgoing the books and articles I used to read for inspiration for ever-longer scrolls on TikTok or deep-dives on pop culture subreddits. My once-steady running routine came to a stand still; my five-year-plan was more like a get-through-the-workday plan.

For a while, this didn’t necessarily bother me. I was, as Amil Niazi wrote for New York Magazine, simply vibing, and trying to figure out what I wanted out of my career. I wasn’t alone; over the past three years, articles abounded about workers falling out of love with ambition. All of these reflected what I was feeling in so many ways: What was considered ambitious pre-COVID—hustling and striving and happily sacrificing your personal life and even health for your career—was, is, untenable. There has to be a better path forward.

As the weeks grew into months and the months piled on top of each other, I found myself increasingly dissatisfied with work. To put it plainly: Sometime in the past three years, I, too, lost my ambition.

The habits I’ve fallen into haven’t been serving me; I want to want to reach for something.

Yet going “back to normal,” or forgetting everything we’ve been through, from the COVID-19 pandemic to social and political unrest, and the toll it’s taken on us mentally and physically, is impossible. I struggle with how to square my ambition with the pervasive feeling of languishing many of us have experienced post-pandemic. So rethinking what it means to be ambitious is perhaps in order.

Before I continue: None of this is meant to glorify work for work’s sake, or to pine for the “good old days.” Hustle culture never particularly appealed to me—I spent a few years writing at LifeHacker, and quickly learned how exhausting it is to try to optimize every aspect of my life. I also don’t buy into the “nobody wants to work anymore” rhetoric. If you want to simply live a soft life, well, that’s wonderful.

But what is life without something to look forward to—something to strive for, something new to learn? I want to live a soft life, while also feeling like the work I’m doing is meaningful and helpful to others. While I don’t want things to go back to the way they were before the pandemic, I do want to be ambitious.

Where do I even begin? As Nicole Chung wrote for The Atlantic, “I think it’s worth being curious about our ambitions, and open to reframing or adjusting them as we go.”

“People are bored or exhausted or both,” says Kara Cutruzzula, a journalist, playwright, and author of a daily newsletter on work, life, and creativity, when I call her up to talk about ambition. “But it’s not going to last forever. That impulse to do something new and feel excited and a sense of momentum on what you’re working on is really important.”

If you follow a traditional career path, your 20s are when you can climb the ladder really quickly, says Cutruzzula. This is true for me: Since I’ve graduated college, I’ve gotten a new job every few years, always a step up from my previous role. Reaching the next rung on the ladder for the sake of it was never my goal, but it was satisfying in its own way. It was tangible proof that I was doing something right.

As the years go by, though, there’s a lot more space between the rungs than there used to be. Most people reach a point in their careers where there’s simply too much space to make the next step, and instead they opt for lateral moves—or they look back and realize that they’ve been on the wrong ladder the whole time, says Cutruzzula.

But who’s to say you need to climb a ladder at all?

“You have to define ambition for yourself, and not in the classically defined way that we all consider ambition, with promotions and salaried jobs,” she says. Rather than pursue what you think others value, “follow your own curiosity.”

For Chung, this means “focusing on a specific kind of progress I can actually feel and assess.” That doesn’t have to be someone else’s vision of success, like racking up professional awards or even hitting arbitrary financial milestones.

“Am I taking risks, learning new things, approaching my writing without fear? Am I working with as much care and precision and generosity as possible? Am I being patient with the story, and with myself,” Chung writes. “These things, too, are worthy aims, and may be indicators of my growth as a writer.”

‘Let your soul drag you’

In other words, I should take the time to listen to what my soul is telling me at this juncture in my life, says Satya Doyle Byock, a psychotherapist in Portland, Ore., and author of Quarterlife: The Search for Self in Early Adulthood. Because right now, a lack of ambition means my “soul is tapped out.”

“I think in capitalism, there’s a notion that once you’re on the up and up, you should just keep climbing,” Byock says. “But the reality of being a human being is life is always going to have ups and downs, and we are healthiest when we can stay attuned to those ups and downs.”

Instead of thinking of my ambition as MIA, it would be better to think of myself in a reflection phase of life—my ambition just needed a little break. That could last days, weeks, or months—however long it takes to get “attuned” to myself again, to regenerate creatively and spiritually.

For some people, this might mean taking an extended period of time off of work, if they can swing it financially. But it doesn’t have to be—and most people can’t afford to do so. And this isn’t necessarily a period of rest, says Byock, but of a “different way of being active.” A listening period, so to speak.

“It’s a very rational response to start losing steam. It’s a soulful response,” she says. “It doesn’t mean you have to burn everything down and quit your job, but it could be [asking], ‘Okay, within this system, if I’m really honest, is it possible for me to switch gears?’

“It might mean sitting in a library and poring over new books and letting your soul drag you toward what you find interesting,” she says.

Cutruzzula is something of an expert at switching gears. She began her career as a culture journalist before taking on freelance assignments related to finance, writing, and travel. From there, she learned how to write plays and musicals; she’s also published two guided productivity journals and is working on a third.

“In periods of stagnancy, follow the pull, follow these little tugs in a new direction,” says Cutruzzula, noting she signed up for a song-writing class on a whim, and it led to her learning how to write the book and lyrics for musicals, and an entirely new craft and industry a decade into her career. “Even if it seems out of the ordinary or kind of random, it can take you down an entirely new road.”

Byock recommends engaging with the “seemingly irrational curiosities” I may have—whether that’s interest in a certain topic or an artist I admire.

“Right now, who are the people who most interest you and excite you?” she asks me. “That very well may be your soul telling you this is a new north star.”

Allow yourself to rest

What Byock says makes a lot of sense; it’s how I operated pre-COVID. Some of my favorite days were ones in which I spent hours reading the newspaper or saved articles on my computer, following one topic to the next in a daisy-chain of discovery and inspiration. I felt refreshed after, and brimming with ideas. Even if those ideas didn’t pan out in my 9-to-5, the process was a sort of rejuvenation that helped my spirit—and in turn, my ambition.

Over the past year, though, I can recall only a couple of those days. As we talked, I made a mental note to change that.

Going forward, I know I want two things: to be a writer and to continue to help people. Byock tells me to write those two ambitions down and stick them up on the wall. Then, give myself permission to explore them, and pivot if and when I need to.

Still, even with a little more clarity, I don’t have a tidy ending to this story. I’m still figuring out what my ambition looks like now; I’m taking it one day at a time. And I know I’m not alone in this endeavor. As a friend recently said, “Everyone is having an identity crisis.”

The good news is over the past few weeks, I have felt myself shifting again. I am back on a consistent running schedule, I am writing more in my journal again, I’m sending out a personal newsletter semi-regularly—even researching and working on this piece has helped reignite a spark that had been lying dormant.

Maybe, like Byock said, my ambition isn’t missing. It’s taking a new shape, and I’m learning to be comfortable with that.

“If you’re lost and just plow forward, you’re just going to get more lost,” she says. “If you’re lost, stay put, stay in the same place, figure it out.”