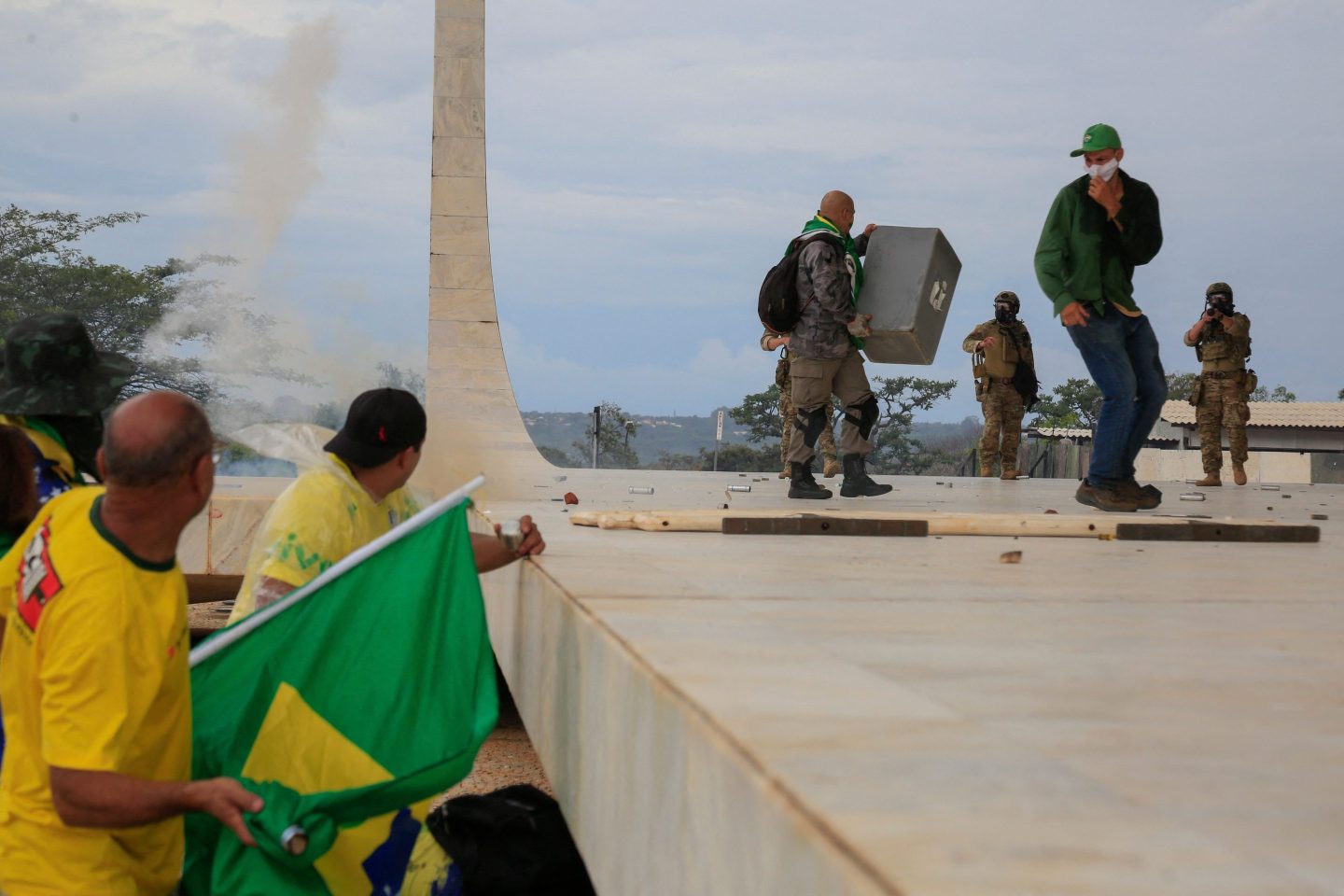 Thousands of supporters of former Brazilian President Jair Bolsonaro stormed the country’s top government institutions on Sunday in an insurrection that tests the leadership of President Luiz Inacio Lula da Silva just a week after he took office.

Pro-Bolsonaro protesters ransacked congress and stormed other government offices before security forces were able to regain control of the capital. As of late Sunday authorities had cleared them from government buildings and regained control of the main square in Brasilia. About 170 people have been detained so far.

Protesters were draped in Brazilian flags and wearing the yellow national jersey associated with conservative politics when they flooded into congress, the presidential palace and the supreme court in an event similar to the Jan. 6, 2021 invasion of the US Capitol.

“There’s no precedent for this in the history of our country,” Lula said in televised comments. “We’re going to find out who the financial backers are.”

Some rioters broke windows, furniture and carried out other acts of vandalism at government headquarters, while others took videos and selfies. Communications Minister Paulo Pimenta said several works of art were damaged.

Lula, who wasn’t in the palace, called the protesters “true vandals” and announced a federal intervention to bring security under control. He vowed to prosecute the rioters and investigate the financial backers of the protests.

“I vehemently repudiate these anti-democratic acts, which must urgently undergo the rigor of the law,” Senate President Rodrigo Pacheco said on Twitter.

President Joe Biden called the storming “outrageous,” while leaders across Latin America were quick to pledge solidarity with Lula. On Twitter, Chile’s President Gabriel Boric characterized the attacks as “unprecedented,” while Colombia’s Gustavo Petro called on members of the Organization of American States to convene and apply the democratic charter.

“Democracy is the only political system that guarantees freedoms and obliges us to respect the popular verdict,” Argentina President Alberto Fernandez wrote on Twitter.

The unrest on Sunday follows months of protests in front of military installations by Bolsonaro supporters who were demanding an intervention to prevent Lula from returning to power. In late December there was a bomb scare near Brasilia’s airport. More than a hundred buses of Bolsonaro supporters arrived in Brasilia ahead of the Sunday protests.

Gleisi Hoffmann, the president of the ruling Workers’ Party, criticized the authorities in the capital for failing to prevent the civil unrest. Lula said police who failed to confront protesters would be prosecuted.

Robert Muggah, co-founder of the Igarape Institute, a think tank in Rio de Janeiro, called the riots the most significant threat to Brazilian democracy since the 1964 coup, and that it will be celebrated by many members of Brazil’s far right.

“They will treat this as a rallying call for future disruptions,” Muggah said. “Today’s violent insurrection is a reminder that democracy can never be taken for granted.”

Bolsonaro himself never fully accepted his defeat in October elections and went on vacation in Orlando, Florida, instead of attending Lula’s inauguration.

Christian Lynch, a political scientist at the State University of Rio de Janeiro, said Sunday’s events will do irreversible damage to Bolsonaro’s movement, and that the response from all branches of government will be swift and unforgiving.

“It will crush the legitimacy of the far right,” he said. “The system will bring an end to any tolerance for these people.”