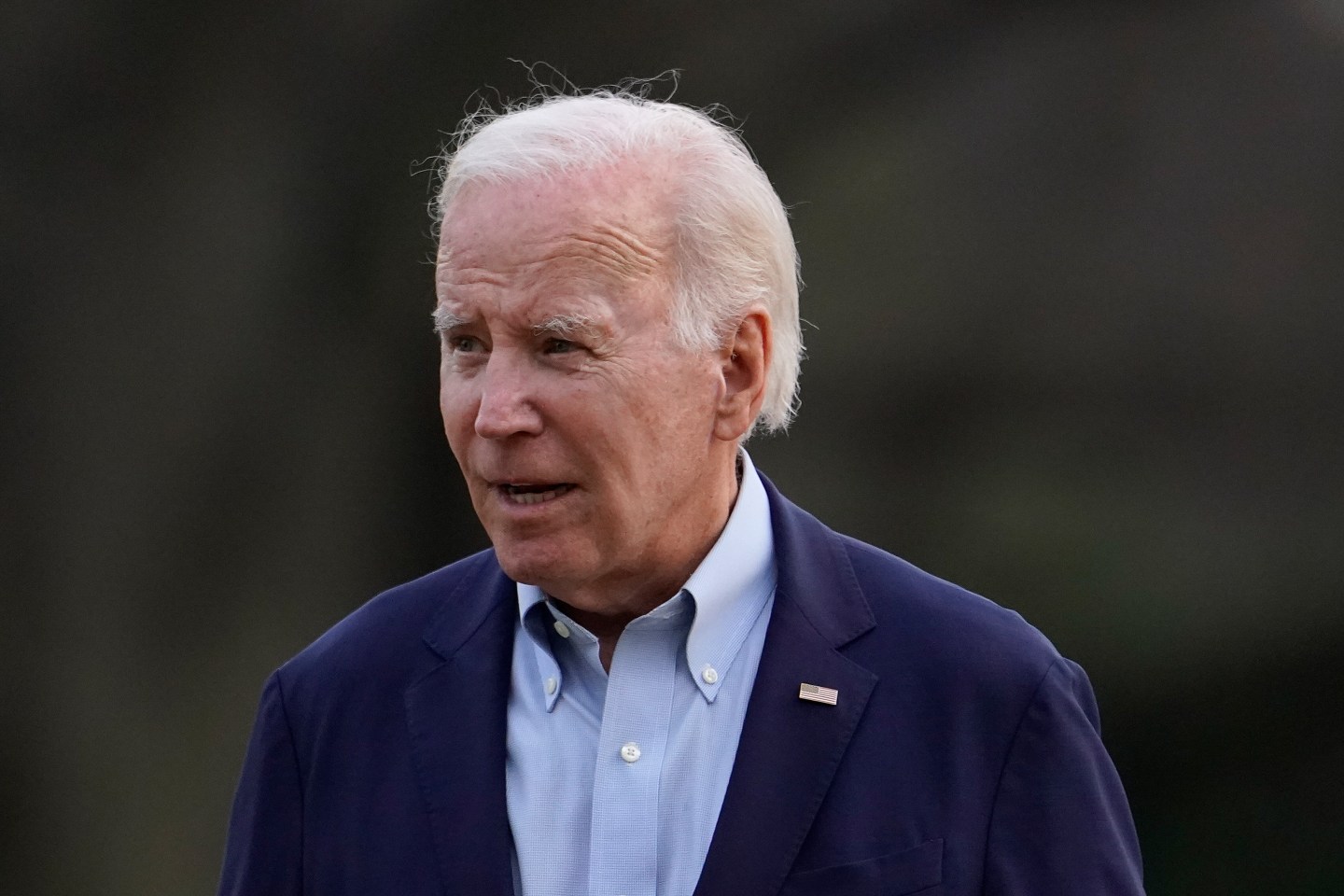 President Joe Biden walks on the South Lawn of the White House after stepping off Marine One, Jan. 2, 2023, in Washington. Biden will visit a notoriously dilapidated bridge connecting Ohio and Kentucky on Wednesday to promote his administration's infrastructure law.
Patrick Semansky—AP Images

President Joe Biden’s visit to a notoriously dilapidated bridge connecting Ohio and Kentucky is a chance for him to showcase accomplishments and talk up the virtues of bipartisanship while rubbing shoulders with Senate Republican leader Mitch McConnell.

The trip on Wednesday is also about cold, hard cash.

“It’s a giant bridge, man,” Biden said this week when asked about his planned trip to the Brent Spence Bridge. “It’s a lot of money. It’s important.”

Indeed, the nearly $1 trillion that Biden’s administration is doling out for roads and bridges, broadband networks and water projects across America will be critical not just for the communities getting the help but to the Democratic president’s political theory that voters are hungry for bipartisanship that delivers tangible results.

As the prospects for massive, transformational legislating diminish rapidly this year in a divided Washington, the White House and top Cabinet officials aim to focus instead on selling Biden’s recent achievements and demonstrating how the new laws directly affect Americans.

That new effort kicks off as Biden stops in northern Kentucky at the perennially congested bridge spanning the Ohio River that has frustrated motorists for decades. The infrastructure law enacted in late 2021 will offer more than $1.63 billion in federal grants to Ohio and Kentucky to build a companion bridge that will help unclog traffic on the Brent Spence.

Other top administration officials are holding similar events Wednesday and Thursday at other major bridges in the U.S. Vice President Kamala Harris is stopping by the collection of bridges crossing the Calumet River in Chicago; Transportation Secretary Pete Buttigieg was appearing at the Gold Star Memorial Bridge in New London, Connecticut; and White House infrastructure coordinator Mitch Landrieu was to be at the Golden Gate Bridge in San Francisco.

All the bridges will get new funding under the infrastructure law, which is one of Biden’s marquee bipartisan accomplishments.

The Brent Spence, which connects Cincinnati and northern Kentucky, was declared functionally obsolete by the Federal Highway Administration in the 1990s. It has become an outsized symbol of the nation’s crumbling infrastructure, with successive presidents from both parties singling out the aging span as they stumped for better roads and bridges.

In 2011, President Barack Obama name-checked McConnell and House Speaker John Boehner, who represented the Cincinnati suburbs, as he stood near the Brent Spence and pushed the two Republican leaders to support a jobs package that would fix similarly ailing bridges. Six years later, President Donald Trump told a local Fox station that “I’ve already heard about the bridge. I love the area.”

“We’re going to get it fixed,” Trump said about the Brent Spence, which he called “dangerous.”

As for Biden, he said during a 2021 CNN town hall in Cincinnati that his administration would “fix that damn bridge of yours.” The span was designed for 80,000 vehicles a day but was easily doubling that on its narrow lanes.

On Wednesday, Biden can begin to make good on that promise.

The president will be accompanied at Brent Spence by McConnell, Sen. Sherrod Brown, D-Ohio, former Sen. Rob Portman, R-Ohio, Kentucky Gov. Andy Beshear, a Democrat, and Ohio Gov. Mike DeWine, a Republican. Officials hope much of the work on the new project will be completed by 2029.

The White House also invited Republican Sens. Rand Paul of Kentucky and newly sworn in J.D. Vance of Ohio, according to a White House official, but neither planned to appear with Biden in northern Kentucky.

McConnell, who was already home in Kentucky, will not fly with Biden on Air Force One but will greet him on the tarmac at Cincinnati Northern Kentucky International Airport, according to a person who was not authorized to speak about the minority leader’s travel plans publicly and insisted on anonymity.

Biden dismissed any notion that the trip to northern Kentucky was about highlighting his longstanding relationship with McConnell, who has been both an ally and a foil during the president’s first two years in office. McConnell was one of 19 Senate Republicans to support the infrastructure law and has said repairing the Brent Spence has long been a priority.

“This is a bridge that has been a major national issue for 25 years, my top transportation project for decades. And it’s going to be fully funded by the infrastructure bill, which I supported,” McConnell told reporters on Capitol Hill on Tuesday. “It’s important for me to be there.”