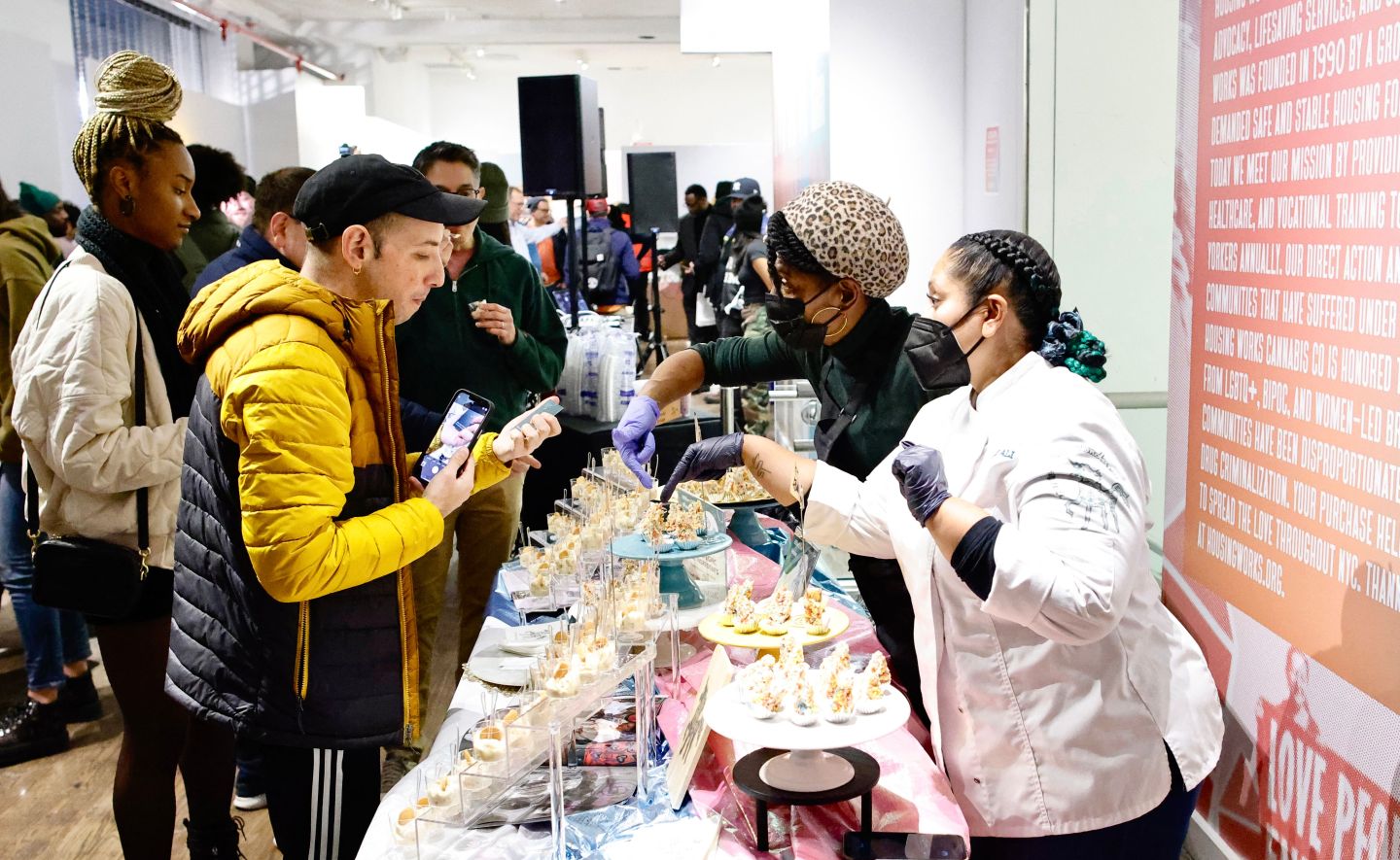 People lined up to attend the opening of the first legal recreational cannabis dispensary in New York City.
Kena Betancur—AFP via Getty Images

The first legal dispensary for recreational marijuana in New York rung up its first sales on Thursday, opening up what is expected to be one of the country’s most lucrative markets for cannabis — underscored by the dozens of unauthorized shops that have operated in the open for years.

The widely anticipated opening of the first state-sanctioned dispensary, which is operated by the nonprofit Housing Works, paves the way for a string of openings expected in the coming months in New York. The state legalized recreational marijuana use in March 2021.

A line of hundreds snaked around the block, many giddy with excitement over the opening. The whiff of marijuana filled the air.

Lino Pastrana was among those waiting his turn after the store opened to the public at 4:20 Thursday afternoon.

“This is historical. It’s really important for us who buy and smoke weed because we can buy quality, instead of buying random weed that you don’t know what it’s mixed with,” Pastrana said.

That’s something he risked, he said. “You can buy weed anywhere in New York,” he said, saying that he expects to buy his merchandise from legal dispensaries from now on.

That’s exactly the hope of New York marijuana regulators, who say that a supervised industry will help ensure that cannabis users are buying safe products.

That, too, was the hope of Housing Works officials, who said that having a marijuana business will help fund its programs.

“We’re absolutely thrilled to be the first and hopefully setting a model that other folks will have to follow,” said Charles King, the chief executive officer of Housing Works, a minority-controlled social-service agency that serves people with HIV and AIDS, as well as those who are homeless and formerly incarcerated.

The lower Manhattan store is the first of 36 recently licensed dispensaries to open, with an additional 139 licenses yet to be issued by the state Office of Cannabis Management and 900 applicants still awaiting word. Among the first round of licensees were eight nonprofits that included Housing Works.

The cannabis storefront abuts the sprawling urban campus of New York University, whose students could provide a ready supply of customers.

“This location is a perfect location. We’re between the West Village, the East Village,” King said at a news conference Thursday morning. “Tourists can come by here easily. So we think we’re going to ring up a lot of sales here.”

Facing a cluster of cameras, Chris Alexander, the inaugural executive director of the state cannabis office, made the first purchase Thursday morning: watermelon-flavored gummies and a tin of marijuana flowers.

“It’s been a lot of work that’s come to get us to this point,” Alexander said. “We do have a lot more work to do, a lot more stores to open.”

New York City Councilmember Carlina Rivera also bought gummies, and said she no longer needs to travel out of state for legal cannabis. She predicted that more openings will be a boon to the state and city economy.

“We are the financial center of the world, the greatest city on earth, and I think people will now come here to enjoy all types things,” she said.

New York joined nearly two dozen other states in the U.S. to legalize recreational marijuana. But unlike many other states, New York has reserved its first round of retail licenses for nonprofits, as well as applicants with marijuana convictions and their relatives — an acknowledgement of the inequities produced by the country’s war on drugs.

It also planned a $200 million public-private fund to aid social equity businesses, which the law defined as those owned by women or minorities, struggling farmers, disabled veterans and people from communities that endured heavy pot policing.

“We have seen firsthand the ravages of the war on drugs, on people who use drugs, particularly the most marginalized people, low income people,” King said.

King said that his nonprofit is hiring people who have been criminalized because of marijuana. Housing Works pursued getting a license because they wanted “to have the opportunity to ameliorate some of the harsh circumstances implicated in both the criminalization of cannabis as well as other drugs,” he said.

“Today marks a major milestone in our efforts to create the most equitable cannabis industry in the nation,” said New York City Mayor Eric Adams in a statement. “The opening of the first legal dispensary in our state right here in New York City is more than just a promising step for this budding industry — it represents a new chapter for those most harmed by the failed policies of the past.”

Adams won his seat on a tough-on-crime platform that rejected progressive activists’ calls to defund the police. He promised to strike the right balance between fighting crime and ending racial injustice in policing. As mayor, he has proposed boosting police and jail spending.

Housing Works officials said that the dispensary had already received more than 2,000 reservations from people wanting to make purchases.

Adriana Myles, who works in the cannabis industry, didn’t want to miss out on the historic day.

“I just wanted to be out here to show support,” she said. “This is the one to be at — the first one.”