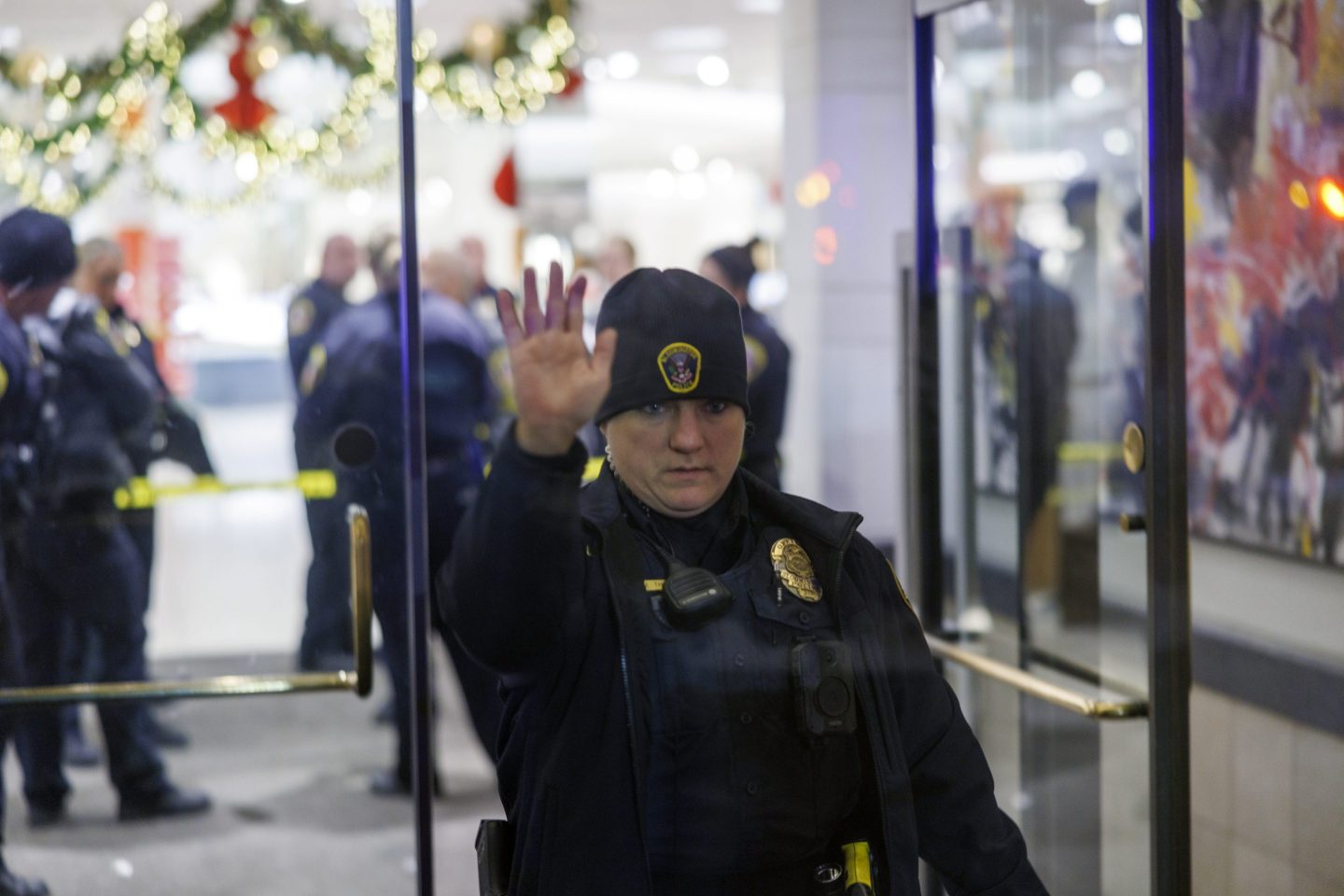 A police officer holds up a hand at a Mall of America entrance in Bloomington, Minn., after reports of shots fired on Friday.
Kerem Yücel—Minnesota Public Radio/AP

A teenager was killed during a shooting at the Mall of America on Friday that sent frightened customers at the nation’s largest shopping center racing into a lockdown just before the holiday weekend, police said.

Bloomington Police Chief Booker Hodges said the victim was a 19-year-old man. A bystander’s jacket was also grazed by a bullet during the shooting at the mall’s Nordstrom location.

There appeared to be some type of altercation between two groups and at one point, someone pulled out a gun and shot the victim multiple times, the chief said. The entire incident lasted about 30 seconds.

Hodges urged the gunman and the others involved in the fight to turn themselves into police.

He also warned people against aiding the suspects in avoiding arrest.

“If anybody helps these people — I mean so much as buy them a Happy Meal, give them a ride,” the visibly upset chief said. “We’re going to lock you up with them.”

The mall is expected to reopen Saturday but the Nordstrom store will remain closed, Hodges said.

Since it opened in 1992, the mall has been a tourist destination and community gathering spot. It bans guns on the premises but shoppers have generally not been required to pass through metal detectors. The mall said in October it was testing a “weapons detection system” at one of its entrances.

Hodges said the mall is continuously evaluating its security measures, including the possibility of adding metal detectors. Still, the chief added, “if we have an incident where someone decides they want to pull out a gun and shoot somebody with a complete lack of respect for human life, then I still don’t know what we can do to stop that.”

Police did not identify the man who was killed but Hodges said he and Bloomington Mayor Tim Busse spoke to the victim’s relatives on Friday night.

“The family here — I really feel bad for them,” Hodges said. “Their last week before Christmas and now they’re having to bury one of their loved ones.”

Mall video surveillance showed the altercation between the two groups — estimated as five to nine people — erupt into a fistfight before one person pulled out a gun and opened fire, the chief said.

“We don’t know why it happened or what happened,” Hodges said.

A nearby Bloomington police officer — one of 16 stationed at the mall Friday — heard the gunshots around 7:50 p.m. The officer tried life-saving measures but the victim died.

The lockdown lasted for about an hour before the mall tweeted that shoppers were being sent outside. Videos posted on social media show shoppers hiding in stores, and an announcement in the mall warned people to seek shelter. Some videos show shoppers running for cover after a loud bang is heard.

The reported shooting comes as shopping centers and malls across the U.S. see an influx of customers just days before Christmas.

Jenny Hefty of Sioux Falls, South Dakota, and her 16-year-old daughter had just gotten off the escalator up to the mall’s second floor, in front of the Nordstrom store, when people started running toward them and screaming. Her daughter thought she heard gunshots, although Hefty did not.

“At first we thought they were just messing around,” she told The Associated Press on Friday night. “It was like ‘why are all these kids running by us?’”

Retailers began shutting their doors and her husband told them to run as armed guards rushed toward Nordstrom, where Hefty had been trying perfume about 20 minutes earlier.

The trio raced to their hotel in the mall complex and frantically tried to reach the couple’s 18-year-old daughter, 21-year-old son and their friends on their cellphones. They had been shut inside stores or whisked into safer spots as the mall locked down.

The family, which often travels the four hours to the mall, was in town for the Minnesota Vikings football game against the New York Giants on Saturday.

“Of course we wanted to come early and do some Christmas shopping,” Hefty said.

The Giants were staying at a hotel adjacent to the mall. Pat Hanlon, the team’s executive vice president of communications, said he believes some players were in the mall at the time of the shooting.

“Everyone is back in the hotel and accounted for now,” Hanlon said Friday night.

The mall was placed on lockdown in August after a reported shooting at the suburban Minneapolis shopping complex sent some shoppers running for cover and two people were wounded last New Year’s Eve during an apparent altercation.

Representatives from the city of Bloomington and Nordstrom did not immediately return requests for comment.