Massive winter storm leads to 3,400-plus flight cancellations, nearly half a million homes and businesses with no electricity 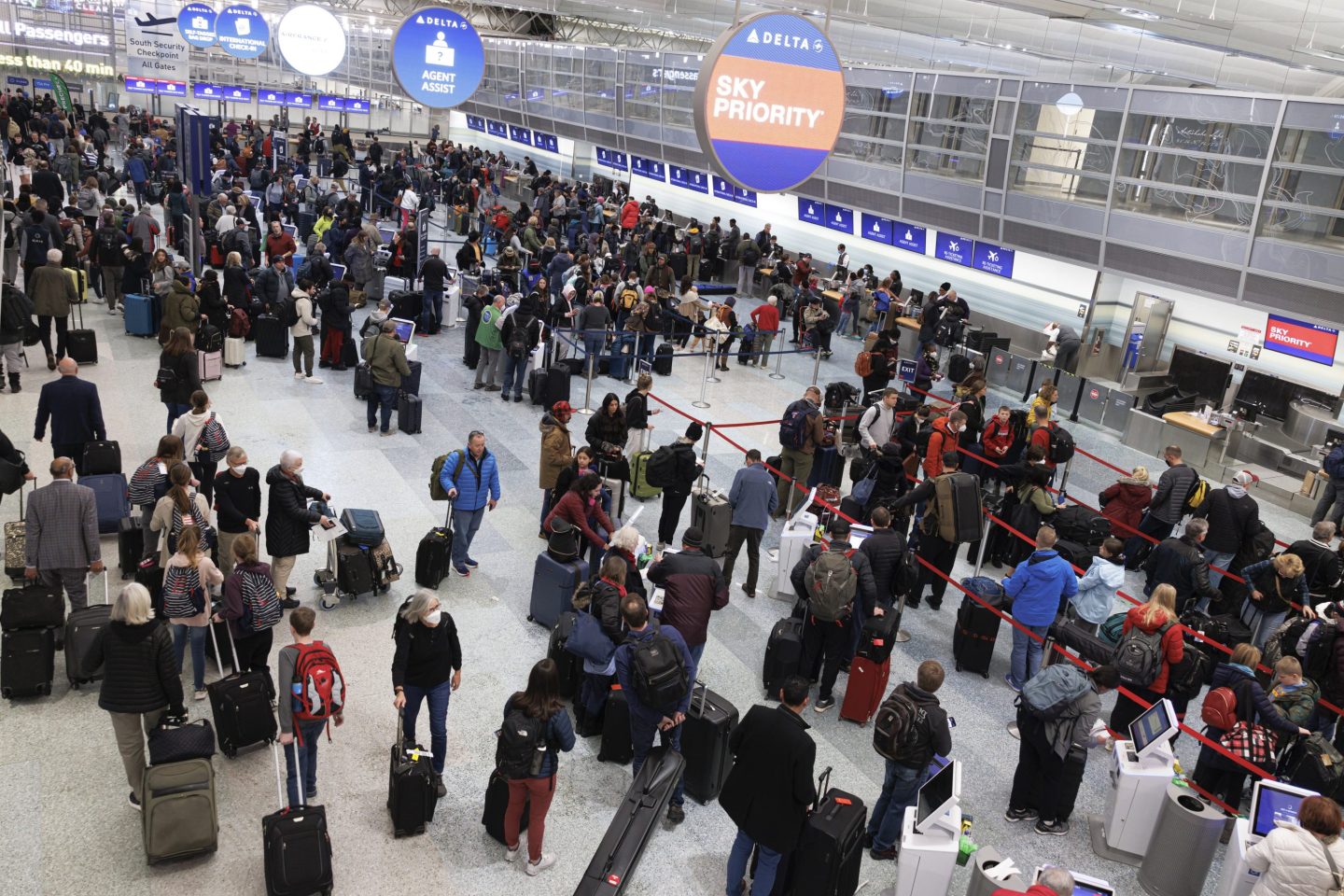 Tens of millions of Americans endured bone-chilling temperatures, blizzard conditions, power outages and canceled holiday gatherings Friday from a winter storm that forecasters said was nearly unprecedented in its scope, exposing 60% of the population to some sort of winter weather advisory or warning.

More than 200 million people — about 60% of the U.S. population — were under some form of winter weather advisory or warning on Friday, the National Weather Service said. The weather service’s map “depicts one of the greatest extents of winter weather warnings and advisories ever,” forecasters said in a statement Friday.

More than 3,400 flights within, into or out of the U.S. were canceled Friday, according to the tracking site FlightAware, causing more mayhem as travelers try to make it home for the holidays. More than 458,000 homes and businesses were without power Friday morning.

The huge storm stretched from border to border. In Canada, WestJet canceled all flights Friday at Toronto Pearson International Airport, beginning at 9 a.m. And in Mexico, migrants waited near the U.S. border in unusually cold temperatures as they awaited a U.S. Supreme Court decision on whether and when to lift pandemic-era restrictions that prevent many from seeking asylum.

“This is not like a snow day when you were a kid,” President Joe Biden warned Thursday in the Oval Office after a briefing from federal officials. “This is serious stuff.”

Forecasters are expecting a bomb cyclone — when atmospheric pressure drops very quickly in a strong storm — to develop near the Great Lakes. That will stir up blizzard conditions, including heavy winds and snow.

Among those with canceled flights was Ashley Sherrod, who planned to fly from Nashville, Tennessee, to Flint, Michigan, on Thursday afternoon. Sherrod was debating whether to drive or risk booking a Saturday flight that she worries will be canceled.

“My family is calling, they want me home for Christmas, but they want me to be safe, too,” said Sherrod, whose bag — including the Grinch pajamas she was planning to wear to a family party — was packed and ready by the door. “Christmas is starting to, for lack of a better word, suck.”

The cold also led to a high demand at homeless shelters, including in Detroit, where some shelters were at capacity Thursday.

“We are not sending anyone back into this cold,” Aisha Morrell-Ferguson, a spokeswoman for COTS, a family-only shelter, told the Detroit News.

And in Portland, Oregon, officials opened four emergency shelters. In the city’s downtown, Steven Venus tried to get on a light-rail train to get out of the cold after huddling on the sidewalk overnight in below-zero temperatures.

“My toes were freezing off,” he said, a sleeping bag wrapped around his head, as he paused near a flimsy tent where another homeless person was taking shelter.

Courtney Dodds, a spokeswoman for the Union Gospel Mission, said teams from her organization had been going out to try to persuade people to seek shelter.

“It can be really easy for people to doze off and fall asleep and wind up losing their lives because of the cold weather,” she said.

The area could see 2 to 4 feet (0.6 to 1.2 meters) of snow through the weekend, National Weather Service meteorologist Richard Otto said.

Denver, also no stranger to winter storms, was the coldest it has been in 32 years on Thursday, when the temperature dropped to minus 24 (minus 31 Celsius) in the morning at the airport.