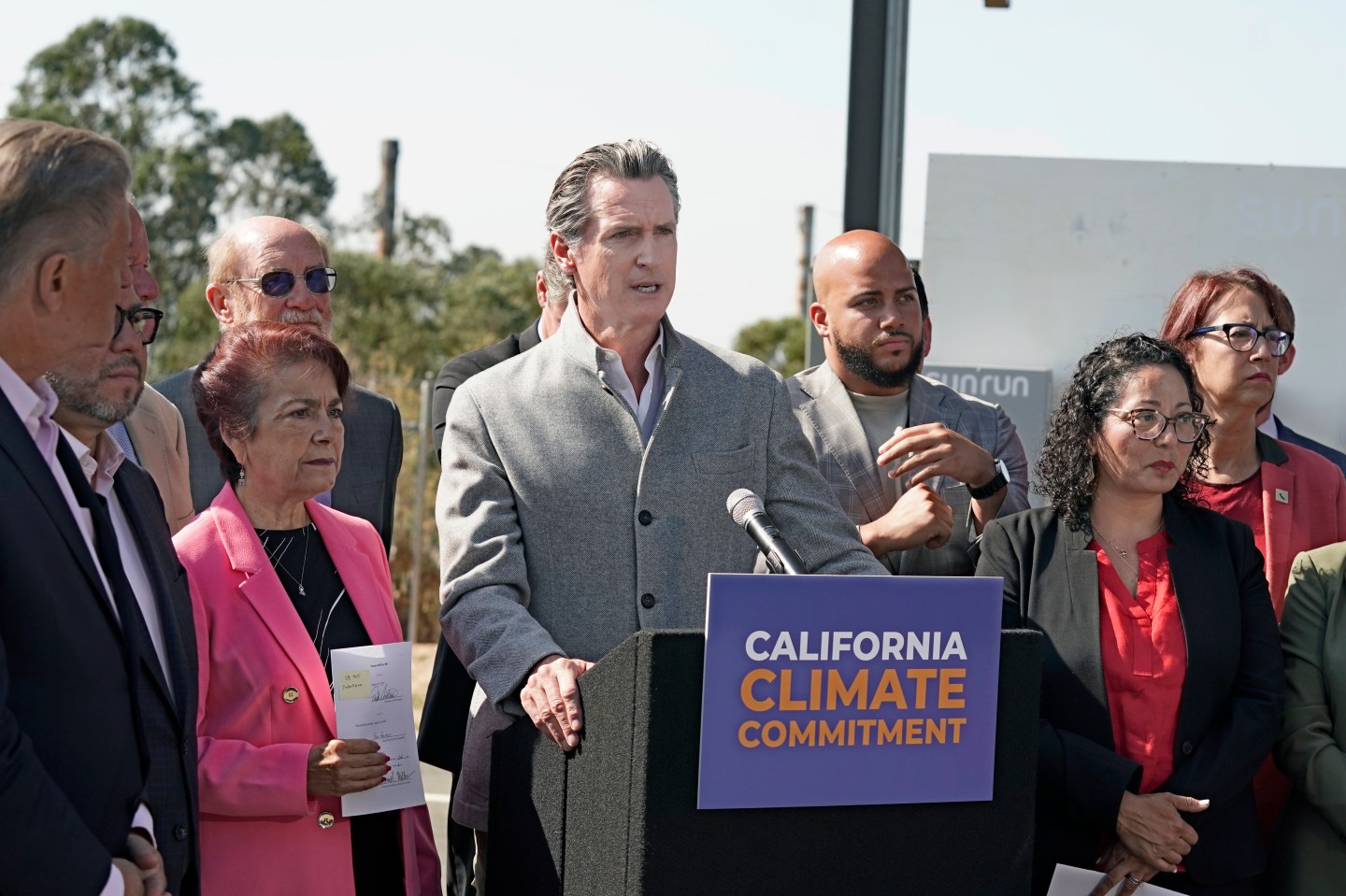 This aerial photo shows the Standard Oil Refinery in El Segundo, Calif., with Los Angeles International Airport in the background and the El Porto neighborhood of Manhattan Beach, Calif., in the foreground on May 25, 2017.
AP Photo/Reed Saxon

The plan sets out to achieve so-called carbon neutrality by 2045, meaning the state will remove as many carbon emissions from the atmosphere as it emits. It aims to do so in part by reducing fossil fuel demand by 86% within that time frame.

California had previously set this carbon neutrality target, but Gov. Gavin Newsom signed legislation making it a mandate earlier this year. The Democrat has said drastic changes are needed to position California as a global climate leader.

“We are making history here in California,” Newsom said in a statement Thursday.

But the plan’s road to approval by the California Air Resources Board was not without criticism. Capturing large amounts of carbon and storing it underground is one of the most controversial elements of the proposal. Critics say it gives the state’s biggest emitters reason to not do enough on their part to mitigate climate change.

In a meeting that lasted several hours, activists, residents and experts used their last chance to weigh in on the plan ahead of the board’s vote. Many said the latest version, while not perfect, was an improvement from earlier drafts, committing the state to do more to curb planet-warming emissions.

Davina Hurt, a board member, said she was proud California is moving closer to its carbon neutrality goal.

“I’m glad that this plan is bold and aggressive,” Hurt said.

The plan does not commit the state to taking any particular actions but sets out a broad roadmap for how California can achieve its goals. Here are the highlights:

The implementation of the plan hinges on the state’s ability to transition away from fossil fuels and rely more on renewable resources for energy. It calls for the state to cut liquid petroleum fuel demand by 94% by 2045, and quadruple solar and wind capacity along that same timeframe.

Another goal would mean new residential and commercial buildings will be powered by electric appliances before the next decade.

The calls for dramatically lowering reliance on oil and gas come as public officials continue to grapple with how to avoid blackouts when record-breaking heat waves push Californians to crank up their air conditioning.

And the Western States Petroleum Association took issue with the plan’s timeline.

“CARB’s latest draft of the Scoping Plan has acknowledged what dozens of studies have confirmed — that a complete phase-out of oil and gas is unrealistic,” said Catherine Reheis-Boyd, the group’s president, in a statement. “A plan that isn’t realistic isn’t really a plan at all.”

At the beginning of Thursday’s meeting, California Air Resources Board Chair Liane Randolph touted the latest version of the plan as the most ambitious to date. It underwent changes after public comments earlier this year.

Officials hope a move away from gas-powered cars and trucks reduces greenhouse gas emissions while limiting the public health impact of chemicals these vehicles release.

In a July letter to the air board, Newsom requested that the agency approve aggressive cuts to emissions from planes. This would accompany other reductions in the transportation sector as the state transitions to all zero-emission vehicle sales by 2035.

The plan’s targets include having 20% of aviation fuel demand come from electric or hydrogen sources by 2045 and ensuring all medium-duty vehicles sold are zero-emission by 2040. The board has already passed a policy to ban the sale of new cars powered solely by gasoline in the state starting in 2035.

The plan refers to carbon capture as a “necessary tool” to implement in the state alongside other strategies to mitigate climate change. It calls for the state to capture 100 million metric tons of carbon dioxide equivalent and store it underground by 2045.

“Our communities have been suffering from chronic disease and dying at disproportionate rates for far too long because of the legacy of environmental racism in this country,” Cho said.

But Cho criticized its carbon capture targets, arguing they give a pathway for refineries to continue polluting as the state cuts emissions in other areas.

One of the goals is to achieve a 66% reduction in methane emissions from the agriculture sector by 2045. Cattle are a significant source for releasing methane — a potent, planet-warming gas.

The plan’s implementation would also mean less reliance by the agriculture sector on fossil fuels as an energy source.