ALS patients face dilemma over drug’s $158K price tag: ‘I’m not going to spend all my money on this’ 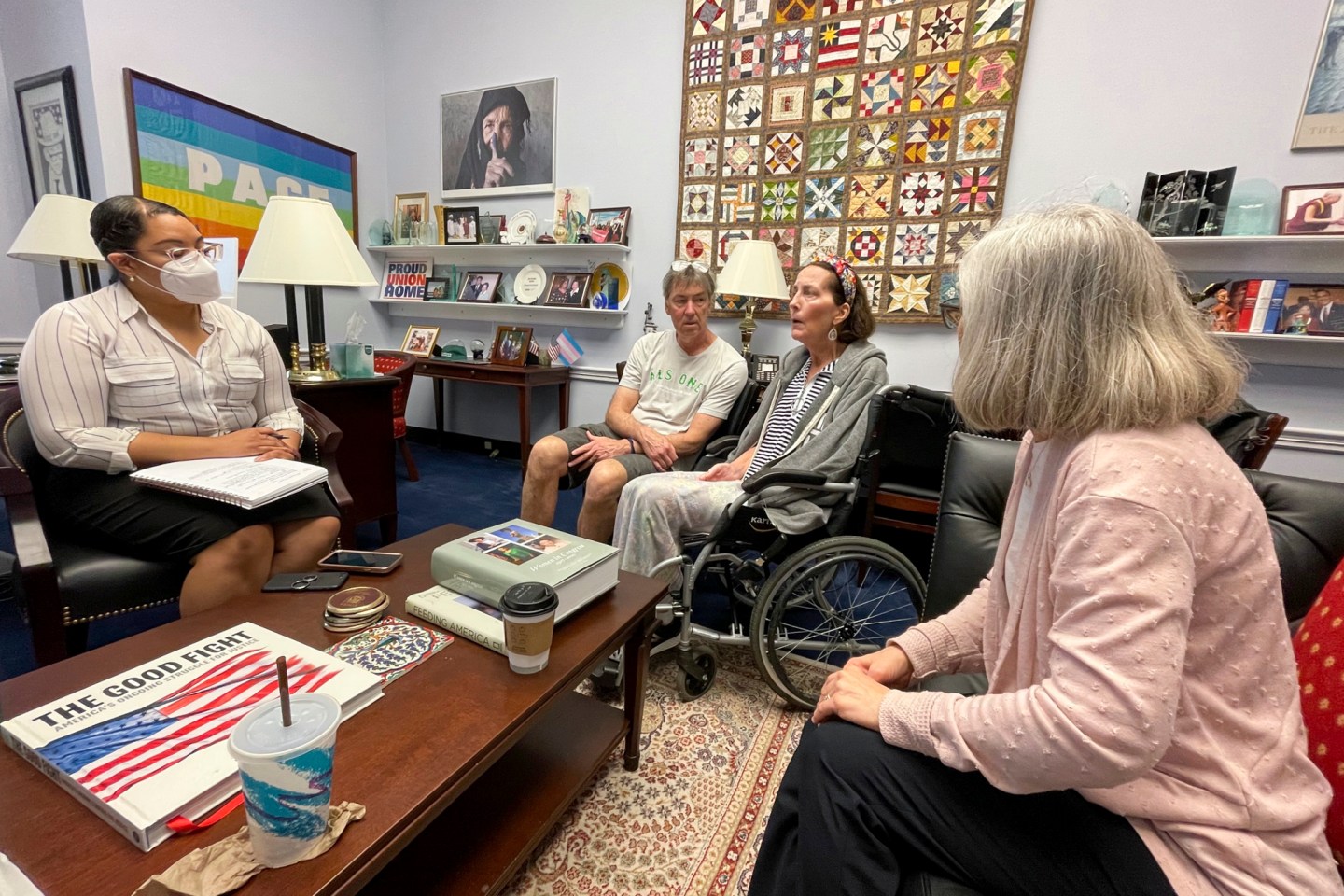 Becky Mourey, center, and her husband Jim, left, meet with representatives for Illinois Rep. Jan Schakowsky at her offices on Capitol Hill, Washington D.C. in May 2022.
Nicole Cimbura—AP

For two years, Becky Mourey pushed the Food and Drug Administration to approve an experimental drug for her Lou Gehrig’s disease.

She went to members of Congress and health regulators to make the case for Relyvrio, until patient-advocates finally prevailed.

In September, Relyvrio became only the third drug approved in the U.S. for ALS, or amyotrophic lateral sclerosis, an incurable neurodegenerative disease that is usually fatal within five years. But patients and physicians who celebrated Relyvrio’s approval several months ago are now contending with the obstacles posed by the U.S. health care system.

Their odyssey is an object lesson in the soaring cost of specialty drugs and the byzantine systems that insurers have created to try and control them.

Mourey’s insurer initially refused to cover Relyvrio, but reversed itself seven weeks later after online pressure— including social media posts by Mourey and other ALS advocates.

“Amylyx priced it way too high,” said Mourey, 58, a former music teacher, who now communicates using a vision-controlled speech computer. “They could cut the price in half and still make a hefty profit.”

Even when Relyvrio is covered, some patients see themselves shouldering co-payments between $1,000 and $4,000 per month.

Unlike those patients, the Moureys have been exempt from copays due to a combination of company-managed Medicare and Medicaid coverage.

Some ALS patients are covered by private plans, while others receive government coverage through programs like Medicare.

In both cases, patients and their doctors can face onerous requirements to document their condition before insurers will pay for an expensive new treatment. Additionally, many insurers require patients to pay a percentage of their pharmacy costs. With many drugmakers now charging upwards of $100,000 for drugs approved for hard-to-treat illnesses, even a 5% copay can become unaffordable. The trend has increasingly made the drug industry deeply unpopular in the U.S.

Amylyx said the delays in coverage for Relyvrio are normal because many insurers are still writing their policies for the drug. The company also highlighted its multiple programs to help patients with costs, including providing the drug for free to the uninsured and covering copays for those who qualify for assistance.

The issues surrounding Relyvrio’s price highlight industry practices that have long been blamed for driving up U.S. health costs: drugmakers can patent new combinations of old ingredients and then charge whatever price the market will bear.

Insurers have responded with extra review hurdles. Those delays weigh heavily on patients with ALS which is measured in the monthly loss of functions like walking, speaking and swallowing.

“It’s just stressful and aggravating to get these multiple denial letters,” said Jim Mourey, who cares for his wife full time at their home in Hopkinton, Massachusetts.

Relyvrio is a powder-based formulation that combines two older ingredients: a prescription drug for liver disorders and a supplement used in traditional Chinese medicine that’s available on Amazon.com for about $1 per day’s supply.

Insurers typically won’t pay for ALS patients to receive the prescription ingredient, because it’s not approved for their disease. But some patients have gotten their plans to cover it or have found lower-price versions — for less than $600 a month— at specialty pharmacies. That’s led some patients to skip the new drug entirely by obtaining its two ingredients separately.

One group that analyzes drug pricing said a fair price for Relyvrio would be between $9,100 and $30,700 per year. The drug showed some effectiveness in slowing the progression of ALS, based on patient questionnaires. Amylyx is conducting a larger study to answer lingering questions about its effectiveness, including whether it extends survival.

Layne Oliff, 63, hasn’t yet decided whether to seek coverage from his Medicare plan. Under the federal program, he would likely owe $7,400 in copays for Relyvrio before reaching his out-of-pocket maximum. That’s on top of monthly administration fees of over $600.

But if he pays cash, Oliff says he can buy the prescription ingredient in the drug for $550 per month, or $6,600 per year, from a specialty pharmacy. He can get the supplement online for about $30 a month.

“You’re talking about a drug that’s not a cure, though it has helped slow the progression” said Oliff, who trained as a pharmacist. “But I don’t want to leave my wife someday in a financial hole; I’m not going to spend all my money on this drug.”

Amylyx has set up a program to cover the copay costs for patients with private insurance. But that financial assistance cannot be used for federal plans like Medicare and the Veterans Administration, which cover many ALS patients. After initially restricting coverage, the VA recently broadened its eligibility.

Other insurers are initially rejecting coverage or requiring multiple rounds of documentation from doctors.

“When someone’s lifespan is measured in months, making people go through these multiple rounds of review is just cruel,” said Neil Thakur of the ALS Association. The group invested in Amylyx’s early research and stands to recoup that investment.

Dr. Terry Heiman-Patterson, a neurologist at Temple University, says it’s taken about four to six hours of phone calls with insurers to get each new patient on Relyvrio.

Heiman-Patterson warns her patients to expect weeks of back-and-forth before getting the drug.

“This is the process we’re going to have to go through and I don’t know what your copay is going to be in the end,’” she says.

Some patients who are already taking a do-it-yourself approach to the treatment see little reason to change.

Sarah Nauser, a former police officer, says her insurance has covered the prescription ingredient in Relyvrio — sodium phenylbutyrate — for a $10 copay since 2020.

“After seeing all the difficulties that people are having, I’m not going to mess with what’s working,” said Nauser, 34, who credits the combination with slowing her disease and helping her to maintain her ability to walk, talk and feed herself.

The co-founders of Cambridge, Massachusetts.-based Amylyx theorize that the two chemicals in their drug work together to shield cells from premature death. But there’s little agreement among scientists about how the drug works, or even which ingredient is responsible for its benefit.

A small European study of the supplement contained in Relyvrio showed a larger effect on slowing ALS than Amylyx’s study. And researchers there are conducting a larger, 300-patient study of the ingredient.

“That study could be hugely important in telling us whether this one ingredient–which is very inexpensive– is actually effective,” said Diana Zuckerman of the non-profit National Center for Health Research, which analyzes medical research.