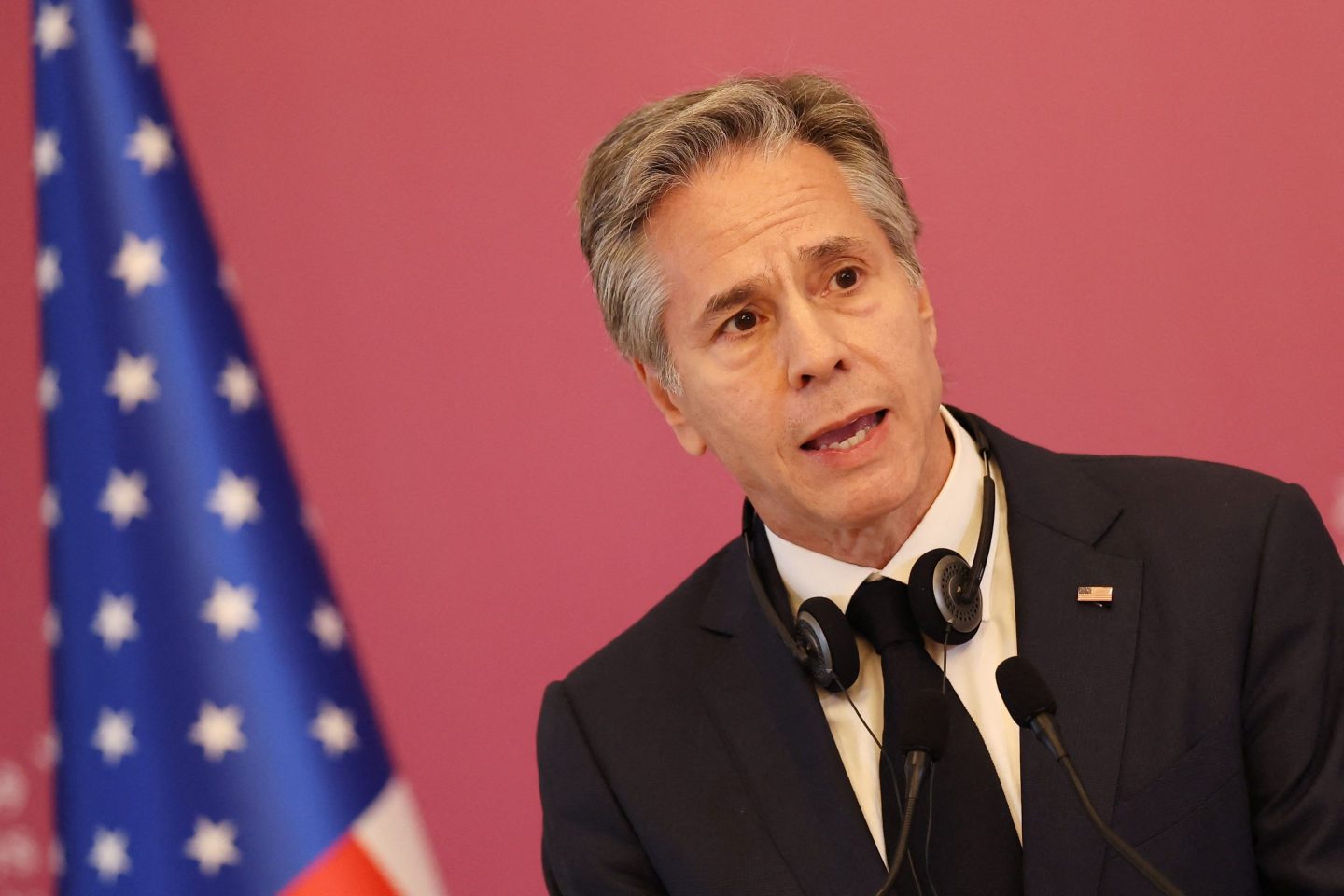 America’s top diplomat on Tuesday criticized a decision by FIFA to threaten players at the World Cup with yellow cards if they wear armbands supporting inclusion and diversity.

Speaking alongside his Qatari counterpart at a news conference, U.S. Secretary of State Antony Blinken said it was “always concerning … when we see any restrictions on freedom of expression.”

“It’s especially so when the expression is for diversity and for inclusion,” Blinken said at Doha’s Diplomatic Club. “And in my judgment, at least no one on a football pitch should be forced to choose between supporting these values and playing for their team.”

FIFA did not immediately respond to a request for comment over Blinken’s remark.

Just hours before the first players with the armbands in support of the “One Love” campaign were to take the field on Monday, soccer’s governing body warned they would immediately be shown yellow cards — two of which lead to a player’s expulsion from that game and also the next.

No player wore the “One Love” armbands Monday though seven European teams had said they planned to wear them ahead of the tournament. England’s Harry Kane wore a FIFA-approved “No Discrimination” armband that was offered as a compromise in the match with Iran.

Blinken arrived in Qatar on Monday, where he visited a youth soccer program tied to the World Cup. He later watched the U.S. tie with Wales on Monday night.

While openly critical of FIFA, Blinken struck a more measured tone with Qatar. This energy-rich Mideast nation has been criticized ahead of the tournament over its treatment of migrant laborers and criminalizing gay and lesbian sex.

“We know that without workers, including many migrant workers, this World Cup simply would not have been possible,” Blinken said. “Qatar has made meaningful strides in recent years to its labor laws to expand worker rights.”

However, he made a point to add: “Real work remains on these issues, and the United States will continue to work with Qatar on strengthening labor rights and human rights more broadly long after the World Cup is over.”

Blinken spoke alongside Qatar’s foreign minister, Sheikh Mohammed bin Abdulrahman Al Thani, at the news conference. Asked by a Qatar-based journalist about the “media attacks” on his country, Sheikh Mohammed dismissed them.

“As for the reforms the state of Qatar, I think there were some quarters who did not take this into consideration and relied on preconceived notions,” he said. “Of course we cannot change the opinion of those who just want to attack us or distort our image.”

Blinken’s visit comes as part of a strategic dialogue with Qatar, which also hosts some 8,000 American troops at its massive Al-Udeid Air Base that’s serves as the forward headquarters of the U.S. military’s Central Command. The base was a key node in America’s chaotic 2021 withdrawal from Afghanistan and evacuation of Afghan civilians.

One major issue to discuss is Iran. Nonproliferation experts say Iran now has enough uranium enriched up to 60% — a short step from weapons-grade levels — to reprocess into fuel for a nuclear weapon if it chooses to do so.

Tehran insists its program is peaceful, though it has drastically expanded it since the collapse of Iran’s 2015 nuclear deal with world powers.

Meanwhile, Iran is being shaken by monthslong protests following the Sept. 16 death in custody of a 22-year-old woman arrested by the country’s morality police.

A crackdown by authorities and violence surrounding the demonstrations have killed at least 434 people, according to Human Rights Activists in Iran, a group that’s been monitoring the protests. Iran is playing at the World Cup as well, and will face the U.S. on Nov. 29.

“The world is rightly focused on what’s happening inside of Iran,” Blinken said. “The protests that have arisen since the killing of Mahsa Amini are something that have galvanized the world.”

Questioned about the U.S. recent decision to shield Saudi Crown Prince Mohammed bin Salman over the lawsuit targeting him for the killing of Washington Post journalist Jamal Khashoggi, Blinken said the Biden administration would “simply follow the law” in terms of granting immunity to a head of state.

Blinken added there were no plans for the crown prince to visit the U.S.