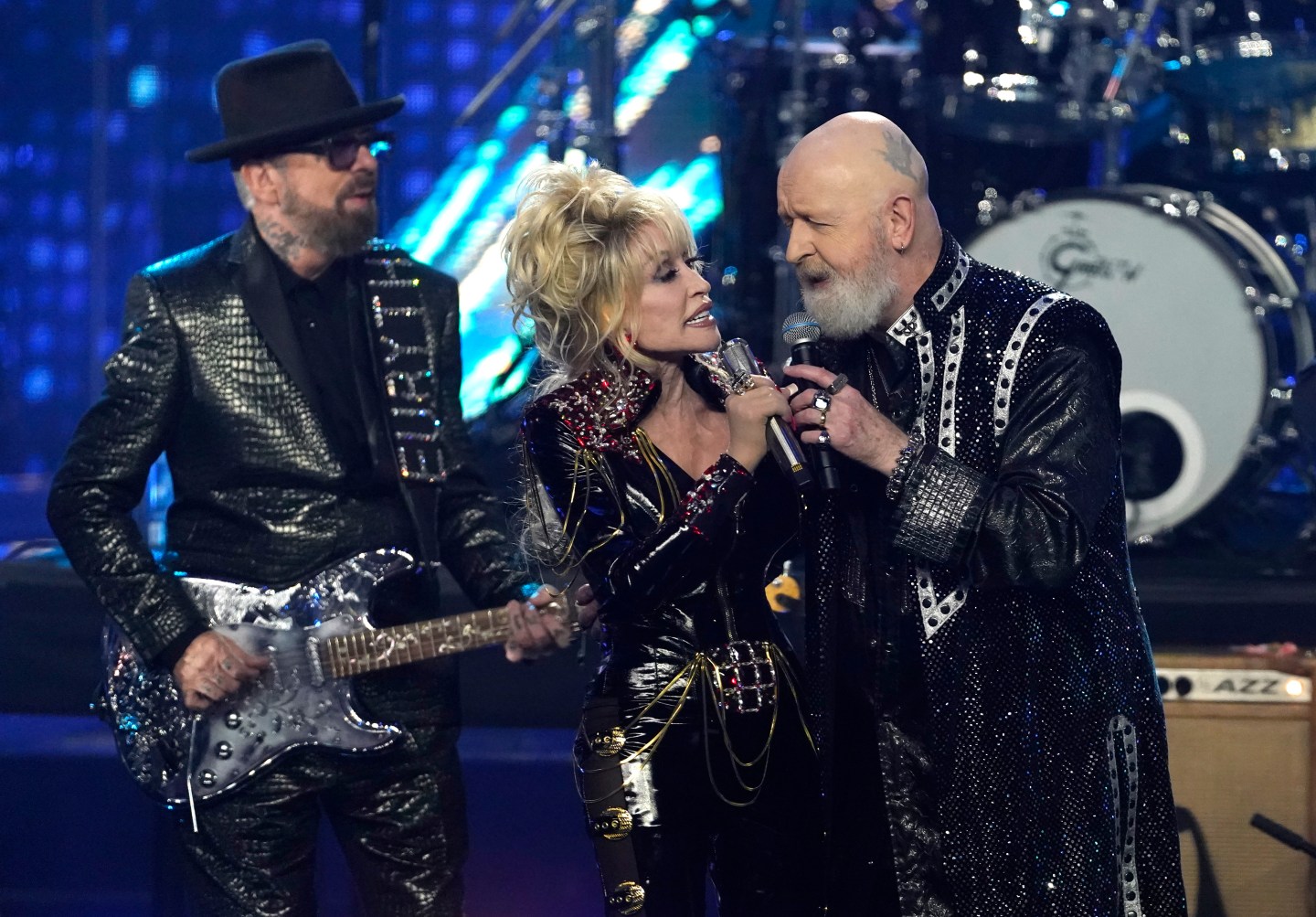 Two weeks after the rousing entrance of Duran Duran, Dolly Parton, Eminem and Lionel Richie and many others into the Rock & Roll Hall of Fame, the ceremony at the Microsoft Theater in Los Angeles will air on HBO at 8 p.m. on Saturday night, when it can also be seen streaming on HBO Max. If past telecasts are any indication, the 6 1/2-hour will be cut roughly in half for the television audience. Here are a few memorable moments from the show, that might get short shrift on TV.

A moment for metal

Many of this year’s Hall inductees had more fame than Judas Priest. None had more rock ‘n’ roll. The heavy metal mainstays delighted a room full of pop-minded Lionel Richie fans and Duran Duran stans who may well have shunned them in their 1980s heyday.

Judas Priest showed they could still bang their graying heads as they lit up the Microsoft Theater on Nov. 5 with a set that included “Breaking the Law” and “Living After Midnight,” bringing back former members including original guitarist K.K. Downing and ex-drummer Les Binks.

The Priest acceptances speeches that followed made metal feel warm and fuzzy, especially that the face and frontman of the band, Rob Halford, who went last.

“Hello, I’m the gay guy in the group,” Halford began, bringing cheers. He broke ground when he came out in 1998.

“We call ourselves the heavy metal community which is all-inclusive, no matter what your sexual identity is, what you look like, or what you believe in or don’t believe in,” he said. “Everybody’s welcome.”

Halford later thrilled the crowd again by singing part of a verse during the evening-ending all-star jam on Parton’s song “Jolene,” the kind of bizarre pairing these moments at the Hall are made for.

Or maybe on this night it wasn’t so odd. Parton, who temporarily turned down the honor thinking it should go to a more rocking artist, played up her new status, emerging for her performance in as much black leather as the guys in Judas Priest.

Newly minted members whose careers came behind the scenes rarely make Rock Hall headlines or get major minutes on TV. But sometimes those doing the inducting give them a big boost, as three Hall of Famers did this year.

Janet Jackson (class of 2018), dressed as she did on the cover of her breakthrough 1986 album “Control” to pay tribute to the men who helped her make it and were her career’s key collaborators, Jimmy Jam and Terry Lewis.

Bruce Springsteen (class of 1999) sang the praises of Jimmy Iovine, who rose from a mere studio engineer on his 1975 album “Born to Run” to become one of the most important music executives of the past 30 years as founder of Interscope Records. “Congratulations little brother!” Springsteen shouted as he invited Iovine to the stage.

And John Mellencamp (class of 2018) made maybe the night’s most memorable speech, a long, sprawling, occasionally awkward but always heartfelt tribute to, of all things, a lawyer.

He inducted Allen Grubman, a co-founder of the Rock Hall and attorney to many current and future members.

“Allen is Jewish, and I bring that up for one reason,” Mellencamp said. “I’m a gentile, and my life has been enriched by countless Jewish people.”

Mellencamp made the menace of antisemitism his theme, and while he never mentioned the recent comments of Ye, the artist formerly known as Kanye West, he definitely brought them to mind.

“I knew he was going to make me cry,” Grubman said when Mellencamp finally brought him to the stage.

Springsteen and Mellencamp couldn’t resist getting in on the music, too, taking the stage to close the show with a medley of hits by Jerry Lee Lewis (class of 1986) eight days after his death. “For the killer!” Springsteen said.

In its earliest days, before it was televised, when it was inducting people like Chuck Berry, Little Richard, the Beatles and the Rolling Stones, the Rock Hall ceremony was a loose and messy affair. It’s now run with the neat efficiency of a sitcom set.

Which made it all the more exciting when Duran Duran opened the night with a big tech glitch. After a spirited induction from Robert Downey Jr., they took the stage and broke into 1981′s “Girls on Film.” Sort of. They were inaudible but for singer Simon Le Bon’s voice. They stopped and started over.

“We just had to prove to you that we weren’t lip-synching,” Le Bon said.