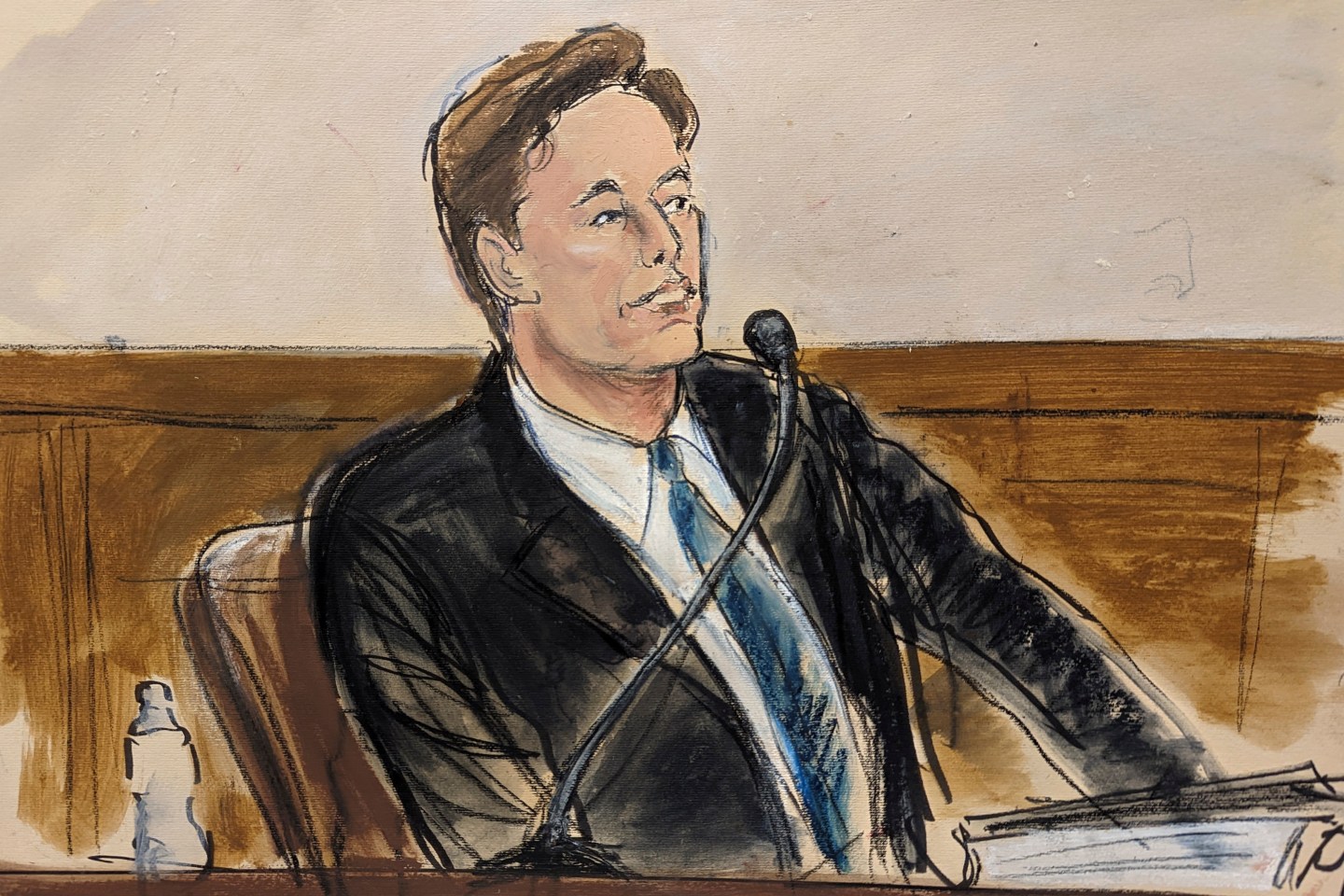 In this courtroom sketch Tesla CEO Elon Musk testifies in a courtroom in Wilmington, Del., on Wednesday, Nov. 16, 2022.
Elizabeth Williams—AP

Tesla CEO Elon Musk took the witness stand Wednesday to defend himself in a shareholder lawsuit challenging a compensation package he was awarded by the company’s board of directors that is potentially worth more than $55 billion.

Musk denied that he dictated terms of the compensation package or attended any meetings at which the plan was discussed by the board, its compensation committee, or a working group that helped develop it.

“I was entirely focused on the execution of the company,” he said.

Plaintiff’s attorney Greg Varallo spent much of his early cross-examination trying to draw Musk into admitting that he controls Tesla to such an extent that he can sway the board to do his bidding. Among other things, Varallo questioned Musk about his title of “Technoking,” a role that Musk has previously noted comes with “panache” and “great dance moves.”

“I think comedy is legal,” Musk told Varallo, who had questioned whether Musk was “stone-cold sober” when he came up with the title.

Varallo also suggested that one of the reasons that Musk developed a “master plan” for Tesla was to let people know he was in charge. He also noted that Musk makes recommendations regarding compensation for senior executives, and that he unilaterally made the decision to pause Tesla’s policy of accepting bitcoin from vehicle purchasers.

“You’re asking complex questions that can’t be answered ‘yes’ or ‘no’,” Musk said when Varallo asked whether he came up with the vision for Tesla.

The lawsuit alleges that the performance-based stock option grant was negotiated by the compensation committee and approved by Tesla board members who had conflicts interest due to personal and professional ties to Musk, including investments in his companies. It also alleges the shareholder vote approving the compensation plan was based on a misleading proxy statement.

The shareholder plaintiff alleges that the proxy wrongly described members of the compensation committee as “independent,” and characterized all of the milestones that triggered vesting in the stock options as “stretch” goals meant to be difficult to achieve, even though internal projections indicated that three operational milestones were likely to be achieved within 18 months of the stockholder vote.

Attorneys for the defendants have noted that two institutional proxy advising firms that urged shareholders to reject the plan nevertheless noted that it would require “significant and perhaps historic achievements” and require growth that “appear stretching by any benchmark.”

The plan called for Musk to reap billions if Tesla hit certain market capitalization and operational milestones. For each incidence of simultaneously meeting a market cap milestone and an operational milestone, Musk, who owned about 22% of Tesla when the plan was approved, would get stock equal to 1% of outstanding shares at the time of the grant. His interest in the company would grow to about 28% if the company’s market capitalization grew by $600 billion.

To date, Tesla has achieved all 12 of the market capitalization milestones and 11 operational milestones, resulting in the vesting of 11 of the grant’s 12 tranches and providing Musk over $52.4 billion in stock option gains, according to the lawsuit. Since the grant was awarded, Tesla’s market capitalization has increased from $59 billion to more than $613 billion now, having briefly hit $1 trillion early this year. Musk has sold Tesla stock to finance the Twitter purchase, adding downward pressure on the shares.

Shares of Tesla and other automakers have been battered this year, but the Austin, Texas, company earned $5.5 billion in 2021, blowing away the previous year’s profit of $721 million. It also produced a record 936,000 vehicles, nearly double vehicle production in 2020.

Attorneys for the plaintiff have suggested that incentivizing Musk to remain at Tesla’s helm by offering a huge compensation package was unnecessary, because he’s never suggested that he might leave. They’ve also suggested that Musk’s true motive in negotiating the package was to fund his dream to colonize Mars.

In a November 2017 email to former Tesla General Counsel Todd Maron, Musk expressed optimism that the compensation package would be seen in a favorable light.

“Given that this will all go to causes that at least aspirationally maximize the probability of a good future for humanity, plus all Tesla shareholders will be super happy, I think this will be received well,” he wrote, adding that “it should come across as an ultra bullish view of the future.”

While on the stand, Musk also said that he does not want to be the CEO of any company.

“I expect to reduce my time at Twitter and find somebody else to run Twitter over time,” Musk said, according to multiple media reports.