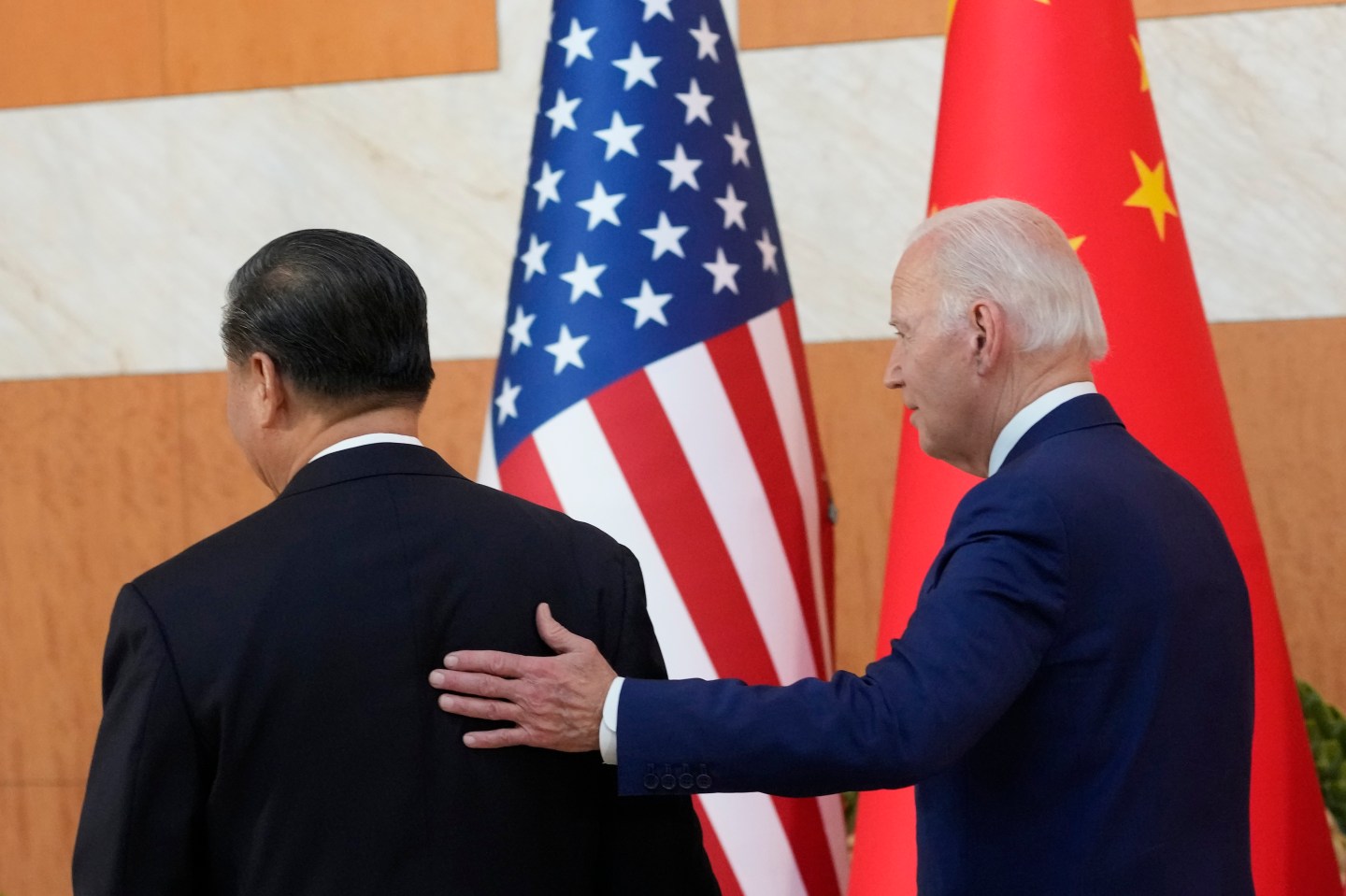 President Joe Biden objected to China’s “coercive and increasingly aggressive actions” toward Taiwan during his first in-person meeting on Monday with President Xi Jinping, as the leaders of the two superpowers aimed to “manage” differences between their nations as they compete for global influence.

The highlight of Biden’s seven-day, round-the-world trip to Asia, the nearly three hour sit-down came at a critical juncture for the two countries amid increasing economic and security tensions. Speaking at a news conference afterward, Biden said that when it comes to China the U.S. would “compete vigorously, but I’m not looking for conflict.” He added: “I absolutely believe there need not be a new Cold War” with the rising Asian power.

Biden reiterated U.S. support for its longstanding “One China” policy, which recognizes the government in Beijing while allowing for informal relations and defense ties with Taipei, and its posture of “strategic ambiguity” over whether it would respond militarily if the island were attacked. He also said that despite China’s recent saber rattling, he does not believe “there’s any imminent attempt on the part of China to invade Taiwan.”

Xi, according to the Chinese government’s account of the meeting, “stressed that the Taiwan question is at the very core of China’s core interests, the bedrock of the political foundation of China-U.S. relations, and the first red line that must not be crossed in China-U.S. relations.”

Biden said he and Xi discussed Russia’s aggression against Ukraine and “reaffirmed our shared belief” that the threat or the use of nuclear weapons is “totally unacceptable.” That was a reference to Moscow’s thinly-veiled threats to use atomic weapons as its nearly nine-month invasion of Ukraine has faltered.

While there were no watershed breakthroughs, the meeting brought each side long-sought, if modest victories. In addition to the oblique condemnation of Russian nuclear threats, Biden appeared to secure from Xi the resumption of lower-level cooperation from China on a range of shared global challenges. Meanwhile, Xi, who has aimed to establish China as a geopolitical peer of the U.S., got symbolic home turf for the meeting, and Biden’s forceful ‘One China’ policy commitment.

The White House said Biden and Xi agreed to “empower key senior officials” on areas of potential cooperation, including tacking climate change, and maintaining global financial, health and food stability. It was not immediately clear whether that meant China would agree to restart climate change talks that Beijing paused in protest of House Speaker Nancy Pelosi’s visit to Taiwan in August. The two leaders agreed to have U.S. Secretary of State Antony Blinken travel to Beijing to continue the discussions.

Xi and Biden warmly greeted each other with a handshake at a luxury resort hotel in Indonesia, where they are attending the Group of 20 summit of large economies.

“As the leaders of our two nations, we share responsibility, in my view, to show that China and the United States can manage our differences, prevent competition from becoming anything ever near conflict, and to find ways to work together on urgent global issues that require our mutual cooperation,” Biden said to open the meeting.

Xi called on Biden to “chart the right course” and “elevate the relationship” between China and the U.S. He said he was ready for a “candid and in-depth exchange of views” with Biden.

Both men entered the highly anticipated meeting with bolstered political standing at home. Democrats triumphantly held onto control of the U.S. Senate, with a chance to boost their ranks by one in a runoff election in Georgia next month, while Xi was awarded a third five-year term in October by the Communist Party’s national congress, a break with tradition.

White House aides have repeatedly sought to minimize any notion of conflict between the two nations and have emphasized that they believe the countries can work in tandem on shared challenges such as climate change and health security.

But relations have grown more strained under successive American administrations, as economic, trade, human rights and security differences have come to the fore.

As president, Biden has repeatedly taken China to task for human rights abuses against the Uyghur people and other ethnic minorities, crackdowns on democracy activists in Hong Kong, coercive trade practices, military provocations against self-ruled Taiwan and differences over Russia’s prosecution of its war against Ukraine. Chinese officials have largely refrained from public criticism of Russia’s war, although Beijing has avoided direct support, such as supplying arms.

The White House said Biden specifically mentioned U.S. concerns about China’s actions in Xinjiang, Tibet, and Hong Kong, and the plight of Americans it considers “wrongfully detained” or subject to exit bans in China.

Taiwan has emerged as one of the most contentious issues between Washington and Beijing. Multiple times in his presidency, Biden has said the U.S. would defend the island — which China has eyed for eventual unification — in case of a Beijing-led invasion. But administration officials have stressed each time that the U.S.’s “One China” policy has not changed. That policy recognizes the government in Beijing while allowing for informal relations and defense ties with Taipei, and its posture of “strategic ambiguity” over whether it would respond militarily if the island were attacked.

Pelosi’s trip prompted China, officially the People’s Republic of China, to retaliate with military drills and the firing of ballistic missiles into nearby waters.

The White House said Biden “raised U.S. objections to the PRC’s coercive and increasingly aggressive actions toward Taiwan, which undermine peace and stability across the Taiwan Strait and in the broader region, and jeopardize global prosperity.”

It came just weeks after the Biden administration blocked exports of advanced computer chips to China — a national security move that bolsters U.S. competition against Beijing.

Xi’s government said he condemned such moves, saying, “Starting a trade war or a technology war, building walls and barriers, and pushing for decoupling and severing supply chains run counter to the principles of market economy and undermine international trade rules.”

And though the two men have held five phone or video calls during Biden’s presidency, White House officials say those encounters are no substitute for an in-person meeting. They said sitting down with Xi was all the more important after Xi strengthened his grip on power with a third term and because lower-level Chinese officials have been unable or unwilling to speak for their leader.

White House officials and their Chinese counterparts spent weeks negotiating details of the meeting, which was held at Xi’s hotel with translators providing simultaneous interpretation through headsets. Each leader was flanked by nine N-95 mask-wearing aides, and in the case of Xi, at least one official newly elevated in the recent Congress to its top leadership.

U.S. officials were eager to see how Xi approached the meeting after consolidating his position as the unquestioned leader of the state, saying they would wait to assess whether that made him more or less likely to seek out areas of cooperation with the U.S.

Biden said Xi was as he’s always been.

“I didn’t find him more confrontational or more conciliatory,” Biden said. ‘I found him the way he’s always been, direct and straightforward.”

Associated Press writers Josh Boak in Baltimore and Darlene Superville in Washington contributed to this report.