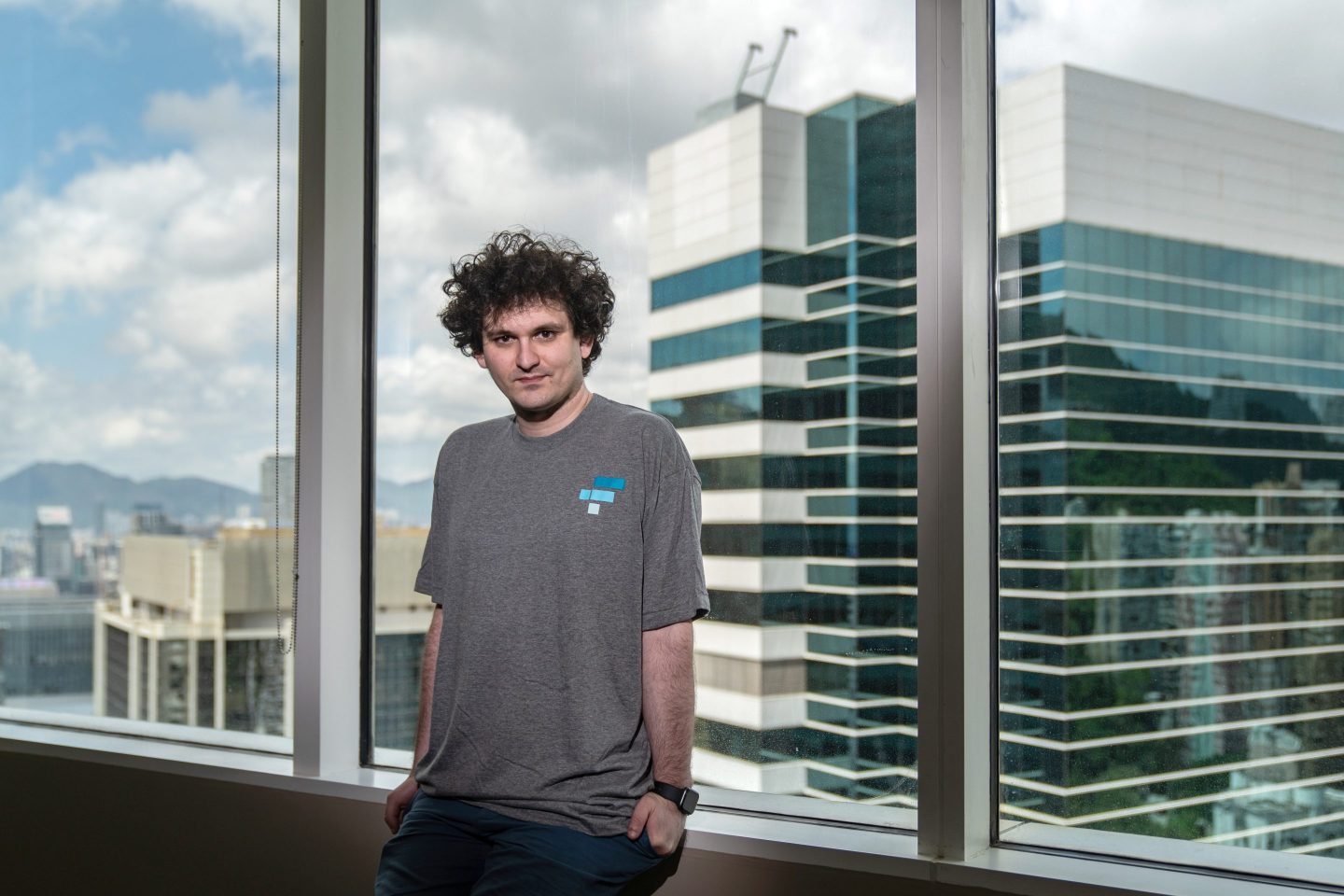 Sam Bankman-Fried, who was ousted as CEO of crypto exchange FTX on Friday after its sudden collapse.
Lam Yik—Bloomberg via Getty Images

Once again, a feud broke out on social media involving outspoken alpha-male celebrities of the cryptocurrency market. Only this time, what followed was tens of billions of dollars of digital wealth vaporizing in a flash.

The crisis of confidence that led to the collapse of billionaire Sam Bankman-Fried’s sprawling global crypto empire was triggered in large part by a few shade-tinged tweets this week from Changpeng “CZ” Zhao, founder of rival Binance Holdings. And the fallout has convulsed a market still reeling from the implosion earlier this year of the Terra blockchain led by Do Kwon, another fallen crypto star famous for his online flame wars with critics who predicted the ultimate failure of his project.

The main criticism of cryptocurrencies has always been that almost none of them are backed by any real-world assets or cash flows. What these episodes highlight is the importance — and fragility — of what really is backing them: larger-than-life personalities and the stories they tell to the public. When these leaders do battle in a venue for all to see and their barbs end up exposing vulnerabilities that shake investors’ resolve, things can blow up fast, causing severe pain for investors large and small.

To Peter Atwater, adjunct professor at William & Mary who studies the role of confidence in finance, the keyboard combat can be like a “bloodsport.” It’s “about not just winning, but vanquishing and winning at the expense of my opponents.”

“It goes without saying, but maybe needs to be said, these are intensely hyper-masculine environments,” said Atwater, who is also the president of Financial Insyghts LLC. “And so it’s sort of modern-day gladiators, complete with a lot of that imagery. They do perceive themselves as disruptive warriors.”

Bankman-Fried was an unlikely warrior in this arena, and perhaps that played a role in the outsize success he enjoyed before his downfall. Soft-spoken yet chatty and eloquent, cerebral but quirky, he rarely changed out of his uniform of T-shirt, shorts and grungy running shoes, or tended to his unruly mop of hair, even when chatting on a panel with a former US president and British prime minister. That type of look might get one laughed off of Wall Street, but in the anti-establishment world of crypto, it helped make him a model founder in the eyes of venture capitalists looking to get in on the gold rush of crypto.

His willingness to testify candidly before Congress and offer recommendations for regulations also gave him an aura of credibility in an industry where that is desperately lacking. All that is making his downfall even harder for the industry to absorb, given its reputation as a playground for scoundrels. If you can’t even trust SBF, whom exactly can you trust now?

“He was the face of friendly crypto regulation,” Noelle Acheson, author of the “Crypto Is Macro Now” newsletter, said in an interview. “What people are justifiably worried about is the credibility hit.”

Yet Bankman-Fried was at times an active combatant, in his own subtle way, in the “Hunger Games” environment that has overtaken industry players vying for the attention of investors amid a bear market and string of bankruptcies this year.

In a late October tweet tagging Binance’s Zhao, which he’s since deleted, Bankman-Fried appeared to take aim at his competitor and flex his own status of having the ear of regulators and politicians in Washington about how to bring order to the anarchy: “excited to see him repping the industry in DC going forward! uh, he is still allowed to go to DC, right?”

A week later, Zhao tweeted that Binance was selling its entire holding of FTT tokens, an FTX-created cryptocurrency that offers lower fees for trading on that exchange and other incentives for holders. Binance, a former investor in FTX, received the tokens when it sold its stake in FTX back to Bankman-Fried’s company last year.

Zhao made a reference to “recent revelations,” without saying exactly what he meant. Yet it’s widely been interpreted as a reference to a Nov. 2 article on the crypto news website CoinDesk that portrayed a troubling link between FTX and another Bankman-Fried enterprise, the trading firm Alameda Research. That report said Alameda had $8 billion in liabilities, while much of the assets on its balance sheet were made up of the FTT token.

Zhao, who often goes by his initials CZ, insisted on Twitter that, “Regarding any speculation as to whether this is a move against a competitor, it is not.” Yet he added an ominous warning: “every time a project publicly fails it hurts every user and every platform.”

Soon, the value of the FTT token was plunging, and users of FTX were rushing to withdraw their assets from the platform. The crypto equivalent of a bank run was underway, reaching a climax with Friday’s bankruptcy filings involving more than 130 entities tied to Bankman-Fried.

The rapid collapse of FTX exacerbated losses in a “crypto winter” that has erased untold fleeting fortunes. Bitcoin, the largest  by market value that was trading at almost $69,000 a year ago, fell below $16,000 at one point during the week. Just about every coin suffered — Ether, Polkadot, Dogecoin and others all declined. FTT collapsed by roughly 90%. FTX’s undoing also ensnared BlockFi, a troubled digital-asset lender once worth $3 billion that had been saved by a line of credit from FTX US. The company said it will pause client withdrawals, citing “a lack of clarity” over the status of FTX US and Bankman-Fried’s other companies. What further contagion will follow is yet to be seen.

To be sure, FTX’s bankruptcy filing is proof that the Bankman-Fried empire’s finances were perilous. And there are still many unanswered questions about why FTX stopped being able to honor requests for withdrawals from customers, and what role the FTT token played in its finances. It’s a giant mess that will take investigators, forensic accountants and bankruptcy court a while to sort out. None of that is Zhao’s fault, of course. Yet what will never be known is if the steady flow of cash generated by FTX would have been enough to paper over the problems and keep the firm viable in the long run if Zhao hadn’t punched at Bankman-Fried in such a public way.

“If you read Shakespeare, it’s all about hubris and pride, psychology,” said Wilfred Daye, chief executive officer of Securitize Capital, a digital-asset management firm. “Sam wants to be the face of regulated crypto exchanges, whereas CZ can’t really get to Washington to do anything. So them rubbing each other in the wrong way caused unintended consequences.”

The ease with which social media allows influential crypto figures to promote their projects, or brawl with their rivals, is both a powerful force and dangerous risk. Do Kwon, the leader of the failed Terra crypto ecosystem that saw $60 billion in value evaporate earlier this year, was one of the most influential and combative figures on crypto Twitter before his critics were proven right. The list of other notable crypto feuds is a long one. Alex Mashinsky, founder of crypto-lender Celsius Network, was famous for taking a pugnacious stance toward critics before Terra’s collapse and other market chaos forced his company into bankruptcy. Even Twitter co-founder Jack Dorsey and venture capitalist Marc Andreessen got into a meme-lobbing spat over VC’s role in building web3 on blockchains.

Of course, other industries are prone to ego-driven decisions that ultimately cause destruction. “Think about Elon Musk and Twitter,” says Marc Chandler, chief market strategist at Bannockburn Global Forex. But with players in the crypto space, “it’s so visible, it doesn’t have layers of corporate bureaucracy and marketing. And you see the raw egos in a way that Corporate America hides behind spreadsheets, behind MBAs. We don’t have that in crypto. It’s so naked.”

The full legacy of the downfall of Bankman-Fried is yet to be seen, but many believe it’s changed the industry forever in big and small ways. Sadie Raney, chief executive of the quantitative crypto hedge hedge fund Strix Leviathan, says she’ll be looking at projects differently going forward, watching out for leaders who are leaning too hard into the role of social-media “influencer.”

“I mean, Satoshi Nakamoto had it right, by building this amazing, amazing ecosystem and then never revealing his, her or their identity,” she said of the presumably pseudonymous inventor of Bitcoin in an interview on the “What Goes Up” podcast. “Satoshi’s not out there influencing what’s happening, which is truly magical. The only reason I’d want to meet them is to find out, when things have gotten so crazy sometimes, how did you keep your mouth shut?”

As for Bankman-Fried, he’s not yet decided to keep his mouth shut — or the Twitter app shut, at least — even after stepping down as CEO of FTX and watching his estimated net worth plunge from more than $16 billion last month to something closer to $0 at the moment. He’s tweeted dozens of times through the turmoil, offering a mix of apologies, explanations and promises to do everything he can to make it right for his former customers.

However, he’s stopped short of completely swearing off keyboard combat with his rival.

“At some point I might have more to say about a particular sparring partner, so to speak,” he said in the 20th post of a 22-tweet thread on Thursday. “But you know, glass houses. So for now, all I’ll say is: well played; you won.”