Gen Z climate activists explain why their protests include defacing works of art: ‘Inherently climate change and capitalism are intertwined’ 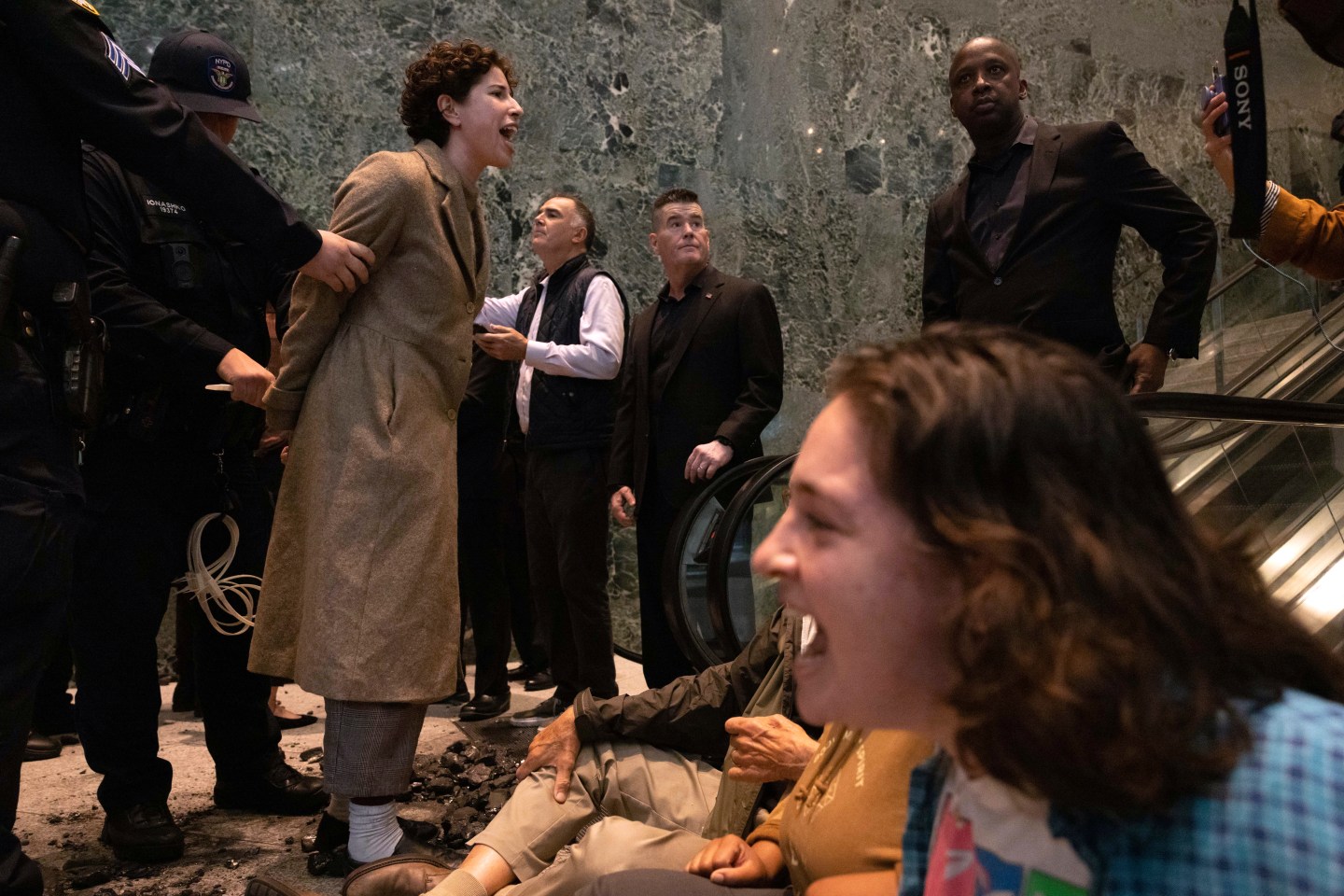 A climate activist is detained during a protest by #OccupyParkAve at the New York headquarters of BlackRock, Oct. 26, 2022, in New York.
AP Photo/Yuki Iwamura, File

The climate change generation is saying officials are talking too much, listening too little and acting even less. And they are fed up.

“Instead of talking about how to solve the climate crisis, they negotiate about how to continue polluting,” said Mitzy Violeta, a 23-year old indigenous activist from Mexico. “Youth movements are realizing the solution isn’t going to be in international gatherings,” like the one taking place in Egypt.

“We’re upset with the inaction that’s being done,” said Jasmine Wynn, 18, of the environmental group Treeage.

With decades of warmer and extreme weather ahead of them, young climate activists envision a future that has them frustrated and anxious, according to more than 130 activists questioned by The Associated Press. Most of them said they think their strikes and protests are effective. But lately in high-profile, attention-grabbing actions, a handful of activists have gone beyond skipping school to targeting art work, tires and fossil fuel depots.

Experts and funders expect these in-your-face actions to escalate.

“They will do whatever is non-violently necessary. They’re on fire,” said Margaret Klein Salamon, a clinical psychologist who runs the Climate Emergency Fund that financially backs some of the in-your-face protest events. “They’re so passionate. Some of that comes from youth, sure. But it is powered by reality, by having a sort of confrontation with the truth.”

At one of the more traditional protests in New York City in September, 14-year-old Truly Hort said she was scared about the future: “I’ve always had all these dreams, and now I’m like ‘God, I can’t do that.’”

The trouble, she said, is that leaders talk about what they hope to do, “but it’s not a lot of people taking action.”

Also mentioning her anxiety at the same protest 16-year-old Lucia Dec-Prat said, “it’s one thing to worry about the future and it’s another to get out there and do something about it.”

But protesting only does so much, Dec-Prat said: “I honestly feel that adults aren’t listening.”

Governments and international organizations are advancing too slowly to fight climate change, many of those interviewed said about climate conferences. A vast majority of activists asked agreed with Greta Thunberg’s characterization of climate negotiations as all talk and no action, or “blah blah blah,” as the Swedish activist put it in a speech last year.

“So rather than just making noise to contribute to the blah blah blah, make noise for action. I think that has to be the critical thing,” said 25-year-old Jevanic Henry of St. Lucia in the Caribbean. “We are driving action.”

“Money doesn’t matter because we’re not going to have anywhere to live,” said Aniva Clarke, a 17-year old activist from Samoa. “And that’s probably the biggest issue that a lot of world leaders aren’t really focusing on.”

While many youth activists don’t feel they are being listened to, United Nations Secretary-General Antonio Guterres credited the world’s youth for spurring negotiators to do more. University of Maryland social scientist Dana Fisher, who studies the environment movement and youth activists, said they’ve testified before Congress and spoken before the United Nations and at past climate negotiations.

“Young people have gotten a lot more say than they did in any other time during my adult life,” Fisher said. “I think a lot of them felt like because they were invited and given these opportunities that that meant everybody’s going to snap and change policy.”

And she said that’s not what happens, which then causes them to get frustrated.

Speaking at a London cultural event, Thunberg said annual climate conferences like the one in Egypt will not bring about meaningful change. “Unless, of course, we use them as an opportunity to mobilize,” she said, “and make people realize what a scam this is and realize that these systems are failing us.”

One of the most prominent youth climate activists, Vanessa Nakate of Uganda, has been both on the outside as a protestor starting the Rise Up Movement and later inside as a UNICEF ambassador on climate change.

“The question should be like, what should the leaders do? What should governments do? Because this whole time I’ve done activism, I have realized the youth have done everything,” Nakate told The Associated Press.

And there’s little doubt about who young activists think needs to foot the bill in the fight against climate change: wealthy, industrialized nations that historically have emitted more greenhouse gases than poorer ones. Rich countries have pledged to pay poor ones to adapt against the hurricanes, droughts and floods made worse by climate change, but so far they’ve not fulfilled their $100 billion promise.

While investors on Wall Street continue pouring money into funds that call themselves ‘green,’ many young climate activists blame free-market capitalism itself for adding heat-trapping gasses to the atmosphere — something that adult analysts and officials often ignore as a factor.

Most of those interviewed called targeting corporations and businesses with more pressure, protests, and shaming — like a recent New York demonstration staged inside financial investment firm BlackRock’s headquarters — an effective tactic in fighting climate change.

Minutes before they marched past the famous Wall Street bull statue and near the site of the Occupy Wall Street movement, 17-year-old Oscar Gurbelic squarely blamed the free market system and big business.

Many say they’re willing to make changes to their own lives to take responsibility for reducing emissions. They fly and drive less, and walk more. A large chunk of activists questioned say they would likely have fewer children because of climate change. Most said they don’t take part in certain activities at least once per week because it is wasteful or polluting.

“We no longer want to live in a world in which we only seek to consume and use things and discard them,” said Violeta of Mexico.

Similar to other protest movements, there are differences in thought over whether to work inside or outside the system. Some activists that AP spoke with collaborate with governments, international organizations and non-profit groups to raise awareness of climate risks facing their communities. Others strictly work at the grassroots level, fighting the powers that be.

Experts studying youth climate activists say that while the generation they belong to is the most educated in history, many want to pause their educations to focus on climate action. Others, like Jevanic Henry, want to merge their professional lives with climate activism. He’s worked for governments and non-profits on climate issues.

“I’m trying to remain optimistic as much as I can,” Henry said in an interview, but he said it’s tempered by a fear that socioeconomic collapse will come if action is not taken across the board.

But hope only goes so far.

“More and more people are going to be upset and frustrated and willing to take more aggressive action,” University of Maryland’s Fisher said. “And the problem is that at some point that can become violent.”

The newer tactics, such as throwing soup or mashed potatoes on famous art work — which has glass protecting them from damage — is born from that frustration, Climate Emergency Fund’s Klein Salamon said.

“We’ve tried everything. Marches and lobbying, writing letters, making phone calls,” Klein Salamon said. “We’re just not where we need to be.”