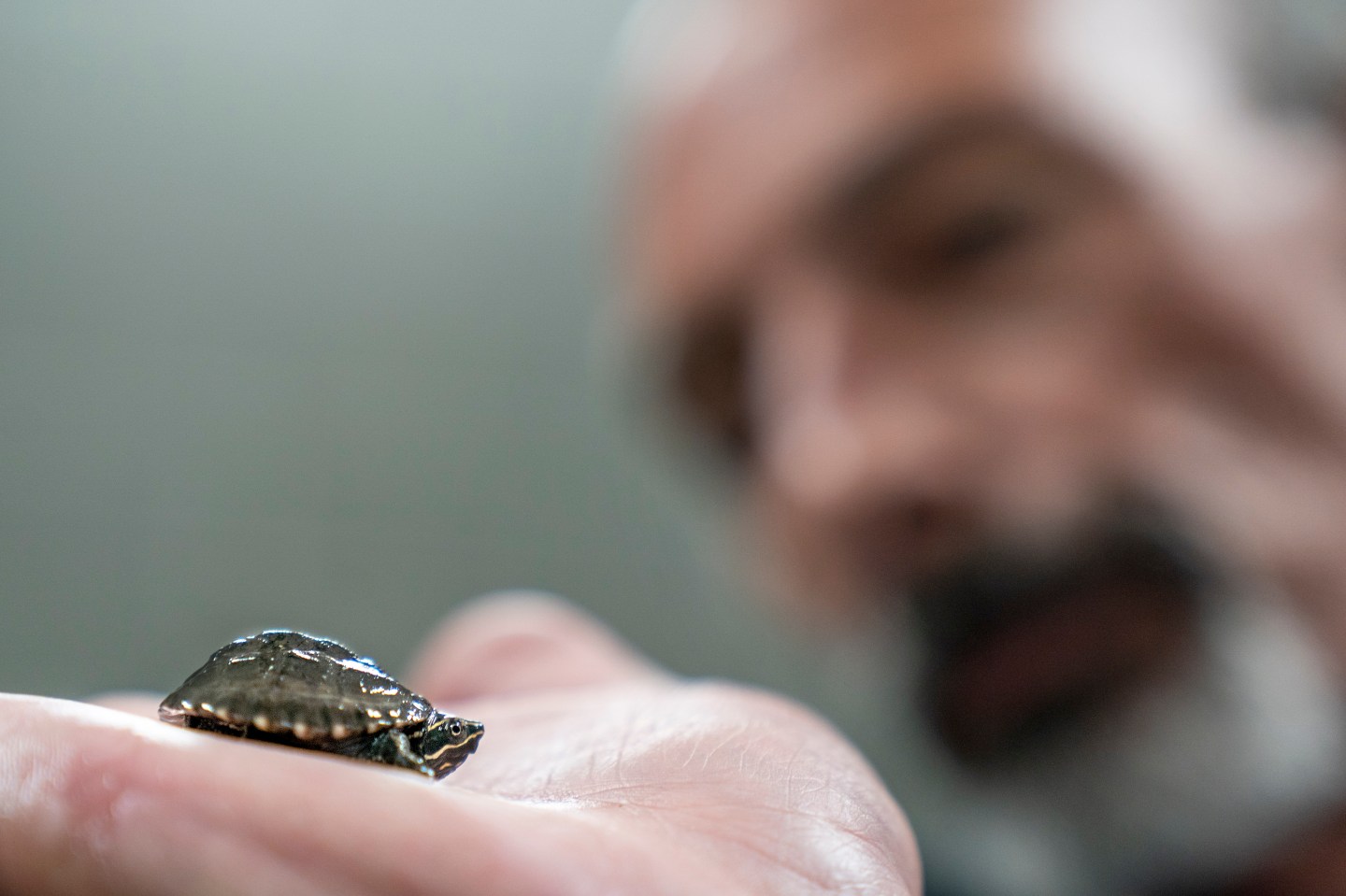 Lou Perrotti, the director of conservation programs at Roger Williams Park Zoo, holds a musk turtle in quarantine after it was confiscated in a wildlife bust, Tuesday, Nov. 1, 2022, in Providence, R.I.
AP Photo/David Goldman

These eastern musk turtles, known for spending much of their lives in swamps and ponds and emitting a foul smell when threatened, were confiscated recently in a wildlife bust. And, though the reptiles are common, their illegal sale on the internet greatly concerns Perrotti, who directs conservation programs at Roger Williams Park Zoo in Providence.

“We are seeing an uptick in turtle poaching,” he said. “It’s getting ruthless where we are seeing thousands of turtles leaving the United States on an annual basis. … Turtle populations cannot take that kind of a hit with that much removal coming out of the wild.”

Such concerns have prompted a dozen proposals to increase protection for freshwater turtles at the 184-nation Convention on International Trade in Endangered Species of Wild Fauna and Flora (CITES) meeting in Panama Nov. 14 through Nov. 25.

Precise figures on the turtle trade, especially illegal trade, can be hard to find. Based on U.S. Fish and Wildlife Service data, Tara Easter, a University of Michigan doctoral candidate who studies the trade, estimated the commercial export trade for mud turtles in the United States increased from 1,844 in 1999 to nearly 40,000 in 2017 and musk turtles from 8,254 in 1999 to more than 281,000 in 2016.

In their CITES proposal to ban or limit the commercial trade in more than 20 mud turtles species, the United States and several Latin American countries cited data from Mexico that found nearly 20,000 were confiscated, mostly at the Mexico City airport, from 2010 to 2022.

Among the world’s most trafficked animals, freshwater turtles are targeted by criminal networks that connect with buyers on the internet then transport the reptiles to black markets in Hong Kong and other Asian cities. From there, they are sold as pets, to collectors and for commercial breeding, food and traditional medicine. In many countries, trade is poorly regulated or not regulated at all.

The lucrative business — some turtle species coveted for their colorful shells or strange appearance can fetch thousand of dollars in Asia — adds to threats turtles already face. Those include climate change, habitat destruction, road mortality and predators eating their eggs.

Poachers are particularly problematic, experts say, because they target rare species and adult breeding females. Many turtle species, which can live for several decades, don’t reach reproductive maturity for a decade or more.

“The loss of large numbers of adults, especially females, can send turtles into a spiraling decline from which they cannot recover,” said Dave Collins, director of North American turtle conservation for the Turtle Survival Alliance. “Turtles have extremely low reproduction levels, producing a few eggs every year.”

Since 2018, the Collaborative to Combat the Illegal Trade in Turtles — an organization of mostly state, federal and tribal biologists who combat poaching of North American turtles — has documented at least 30 major smuggling cases in 15 states. Some involved a few dozen turtles, others several thousand.

Easter at the University of Michigan identified 59 U.S. cases over the past 20 years involving about 30,000 illegally traded turtles.

Earlier this year, a federal judge in North Carolina sentenced a man to 18 months in prison and fined him $25,000 for trafficking turtles in violation of the Lacey Act. The law bans trafficking in fish, wildlife or plants that are illegally taken, possessed, transported or sold.

The man trafficked 722 eastern box turtles — the North Carolina state reptile — as well as 122 spotted turtles and three wood turtles through a middleman for markets in Asia. The man received more than $120,000 for the turtles, which have a value of $1.5 million in Asia.

In 2021, a Chinese national was sentenced to 38 months in prison and fined $10,000 for money laundering after previously pleading guilty to financing a nationwide smuggling ring that sent 1,500 turtles worth more than $2.2 million from the U.S. to China.

The man used PayPal to purchase the turtles from American buyers advertising them on social media and reptile websites and sold them to Hong Kong reptile markets.

In 2020, a New Jersey man was sentenced to two years probation and ordered to pay $350,000 in restitution and fines for smuggling 1,000 three-toed and western box turtles from Oklahoma to New Jersey in candy wrappers and socks.

The illegal trade has prompted governments to propose listing for the first time 42 turtles species under CITES — including North American musk turtles. Though some species like the eastern musk turtle are common, a listing means traders will need a permit to sell them internationally. Commercial sale of other species such as alligator snapping turtles, found in U.S. Gulf states and reaching up to 200 pounds, would be limited.

Proposals would also tighten regulations on 13 others already listed for protection.

“We think that’s really, really important just because of the trends that we’ve seen over the past couple of decades in international reptile and particularly turtle trade,” said U.S. Department of the Interior’s Matthew Strickler, who will head the American delegation at CITES.

“There’s significant demand from Southeast Asia for food and the pet trade, but also from Europe, for pets as well,” he said. “We’ve seen this pattern of turtles being depleted in one place, and then poachers and traffickers and traders moving to another place. Southeast Asia was depleted. They moved to Africa. Now, we see them moving to the Americas.”

The tiny musk turtles were spotted for sale online by a Rhode Island Environmental Police intern. They were only $20 each. The turtles, which grow to five inches (13 centimeters) and live for decades, are brown or black with a white or yellow line along their heads.

Police busted the seller in September after arranging an undercover buy at his house. The seller paid a $1,600 fine for possessing a reptile without a permit. The hope is that the turtles, now quarantined at the Providence zoo, are injury- and disease-free and can be released back to the wild.

“Obviously when we are talking about native species being removed even for pets, it has a big impact,” said Harold Guise, an environmental police detective who handled the case. “The commercialization of wildlife has an impact on wildlife that we can’t even measure until it has already happened. We need to get ahead of these things.”

For Perrotti the conservation director, it was a reminder that illegal trade once focused in Asia is increasingly happening in his backyard.

“I couldn’t believe there was a market for it and that someone was either mass producing these or mass collecting these to make a few bucks,” he said. “A $20 turtle. That’s ridiculous. … Wildlife is not a commodity for somebody to profit on.”