The Powerball jackpot was $20 million just 3 months ago. Here’s how it climbed to a record $1.9 billion. 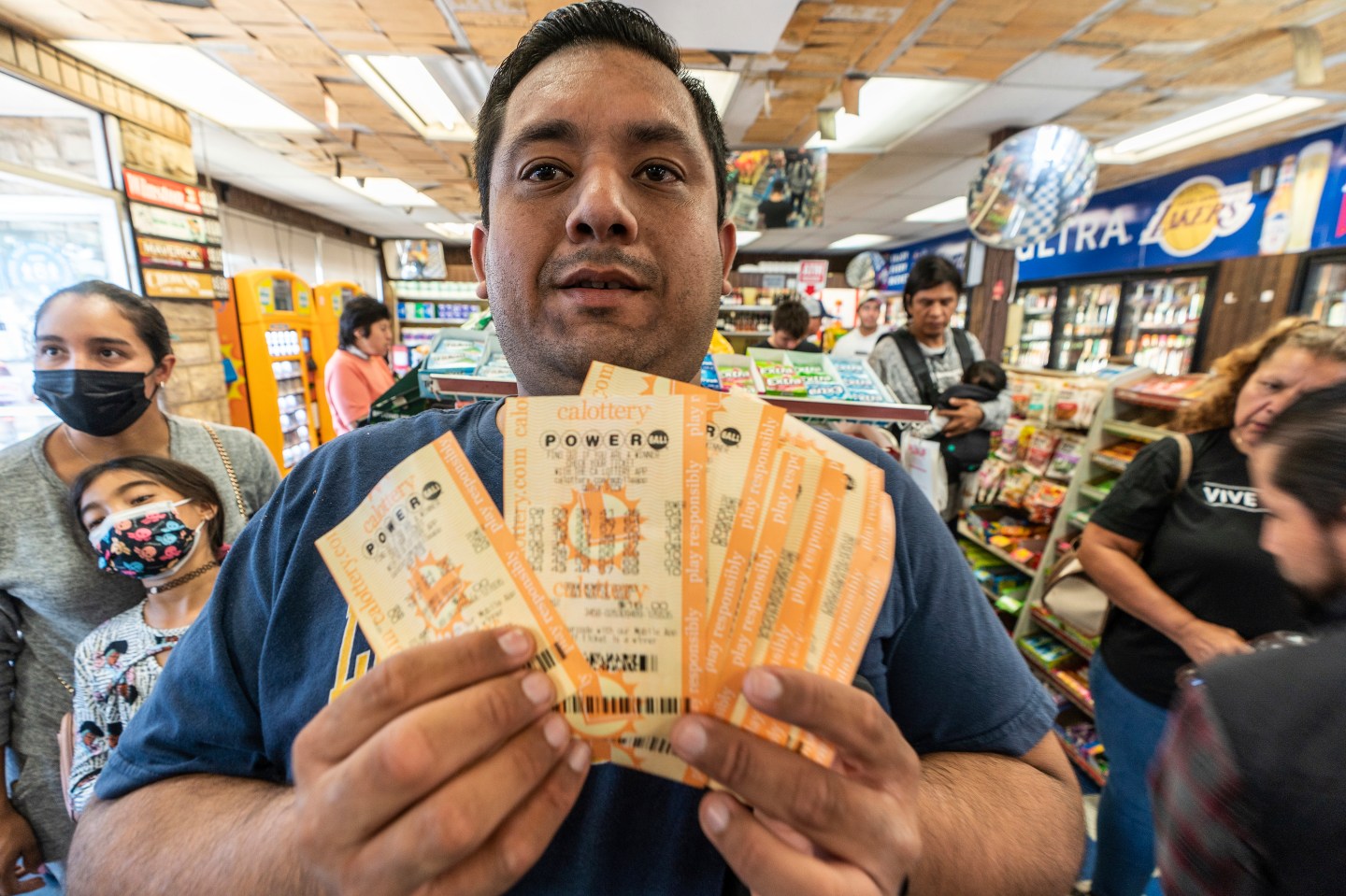 Hector Solis holds up lottery tickets purchased with his co-workers for the Saturday drawing of the Powerball lottery at the Bluebird Liquor store in Hawthorne, Calif., Saturday, Nov. 5, 2022.
AP Photo/Damian Dovarganes

Monday night’s estimated $1.9 billion Powerball jackpot is nearly $400 million larger than the previous record jackpot and will keep growing until someone finally wins the prize.

The jackpot started at $20 million back on Aug. 6 and over three winless months has grown to be 95 times as large. Put another way, it’s a crazy amount of money.

Why so long without a winner?

Those who spend $2 on a Powerball ticket might wonder if something is wrong when 40 drawings pass without a jackpot winner, but this is how the game is designed. With odds of 1 in 292 million, that means it’s unlikely anyone will win the prize until a growing jackpot attracts more players. And more ticket sales mean the lottery can raise more money for public programs, which is the point of the state lotteries. Still, it has been an awful long time without a jackpot, and if there isn’t a winner Monday night, a new record will have been reached: 41 draws without anyone matching all six numbers.

Plenty of people must be playing now, right?

Yes and no. Many, many more people are buying tickets now that the jackpot has reached nearly $2 billion. That’s clear from the fact that when the jackpot started at $20 million in the summer, players bought only enough tickets to cover less than 10% of the 292.2 million possible number combinations. For Saturday night’s drawing, that had climbed to 62%, so millions and millions of people are playing. But that percentage is still less than the 88.6% coverage reached for the previous record jackpot in 2016. And if 38% of the possible number combinations aren’t covered, there is a good chance there won’t be a winner.

Players can choose numbers themselves but the overwhelming majority let a machine randomly pick the numbers.

That’s not the case for George Pagen, of Brooklyn, New York, who always selects his numbers.

Will the eventual winner really get $1.9 billion?

Pity the poor Powerball winner, as the lucky ticketholder will see nothing close to $1.9 billion. It’s only a question of how much less.

First, that $1.9 billion prize is for winners who choose payment through an annuity, which sends out a check annually for 29 years, with a 5% increase each year. But almost no winners take the annuity, instead opting for cash. For Monday night’s drawing, the cash prize would be $929.1 million, or less than half the annuity prize.

Given the difference between the two prize options, Daniel Law of Brooklyn, New York, said he would consult a tax attorney if he won.

“We’d figure out which one is a better deal,” Law said as he bought tickets at a liquor store. “The annuity might be good because it would stop us from spending, but it’s pretty hard to spend $2 billion all at once.”

Federal taxes would take an additional bite, lessening the payout by more than one-third, and many states tax lottery winnings would as well.

The difference between the annuity and cash prizes has grown larger recently because inflation has resulted in higher interest rates, which means money invested in the annuity can grow.

Do I have a better chance of winning if I buy more tickets?

Yes, but your odds of winning aren’t significantly improved. Think of it this way: If you buy one ticket, you have a 1 in 292.2 million chance of winning the jackpot. If you spend $10 for five number combinations, your chances are better, but at 5 in 292.2 million you still almost undoubtedly are not going to hit the jackpot. The same is true if you spend $100. Lottery officials say the average player buys two or three tickets, meaning they’re putting money down on a dream with very little chance it will pay off in a rich reality.

Where is Powerball played?