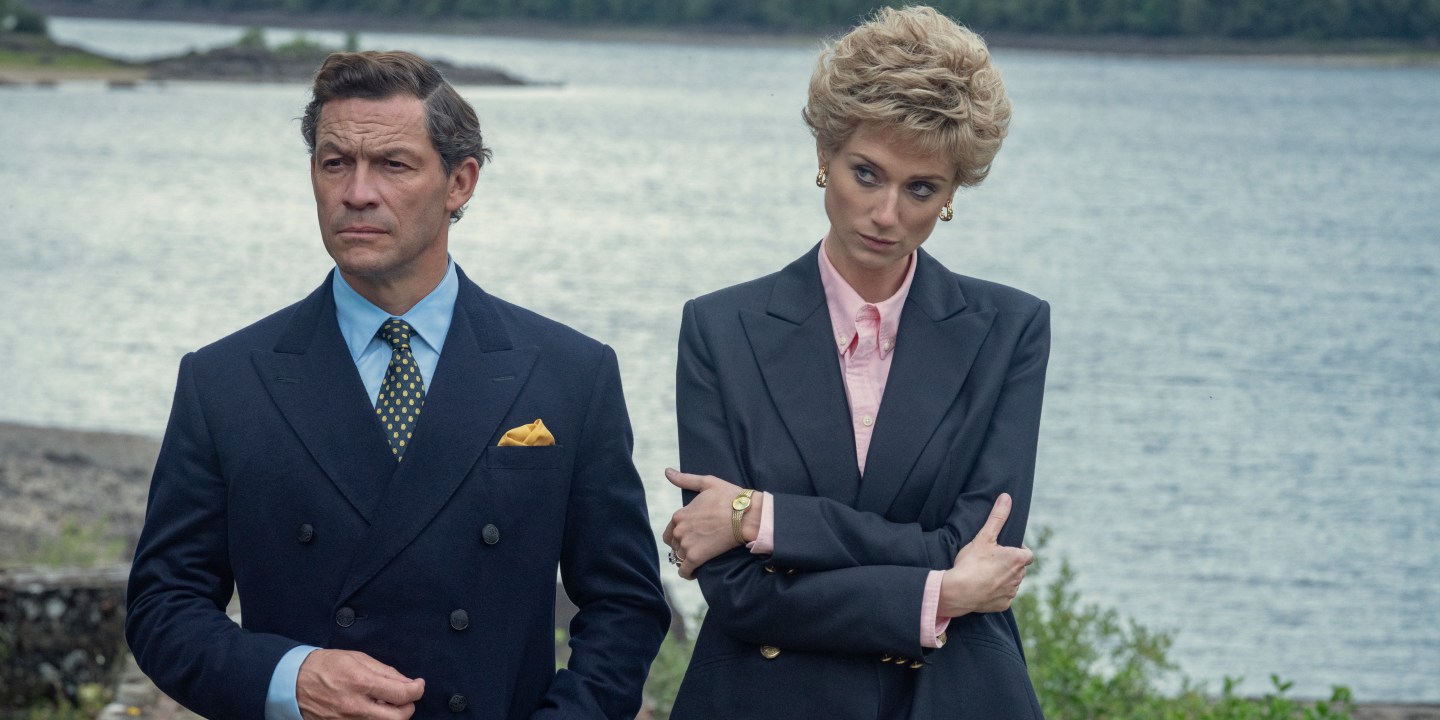 This image released by Netflix shows Dominic West as Prince Charles, left, and Elizabeth Debicki as Princess Diana in a scene from 'The Crown."
Keith Bernstein/Netflix via AP

When “The Crown” returns Wednesday after a two-year absence, the splintering marriage of Charles and Diana and more woes for Queen Elizabeth II are in the drama’s elegant but intrusive spotlight.

There’s swirling off-stage drama as well for the Netflix series that began with Elizabeth’s marriage in the late 1940s and, in its fifth season, takes on the British royal family’s turbulent 1990s. The queen famously labeled one stretch her “annus horribilis” — Latin for “horrible year.”

The safe distance of history is gone in the 10 new episodes set within recent memory for many and whose stories, sight unseen, have been denounced. The death of Queen Elizabeth, 96, in September adds an uneasy dimension: We speculate freely about the famous before and after they’re gone, but is more owed a country’s beloved and longest-serving monarch?

Among the prominent critics is Judi Dench, an Oscar-winner for her role as Elizabeth I in “Shakespeare in Love.” In a letter to The Times of London, the actor blasted elements of the drama as “cruelly unjust to the individuals and damaging to the institution they represent.”

She called for each episode to carry a disclaimer labeling it as fiction. It’s a demand that Netflix has heard before and continues to resist, framing the series as drama inspired by historical events. Series creator Peter Morgan was unavailable for comment, Netflix said.

Dench is not amused by the streaming service’s intransigence.

“The time has come for Netflix to reconsider — for the sake of a family and a nation so recently bereaved, as a mark of respect to a sovereign who served her people so dutifully for 70 years,” she wrote.

Her plea followed a rebuke of the series from former Prime Minister John Major, shown in the new season being lobbied by Prince Charles — now King Charles III — to help maneuver the queen’s abdication. A spokesman for Major labeled the scene as false and malicious.

“The queen is in no danger from ‘The Crown,’” Pryce told The Associated Press. He said critics are lambasting the new season despite ignorance of it, reminding him of what the British once termed “the Mary Whitehouse effect.”

Whitehouse had “a huge following and she criticized programs she’d never seen,” he said. “I think a lot of the protests this time, people haven’t seen this series. They don’t know how these issues are treated. I have to say they’re treated with a great deal of integrity and a great deal of sensitivity.”

Imelda Staunton, stepping in as the latest actor to play Elizabeth, defended the series, its award-winning creator and its viewers.

“I think it’s underestimating the audience,” Staunton told AP. ”There have been four seasons where people know it’s been written by Peter Morgan and his team of writers.”

Morgan, writer of the movie “The Queen” and play “The Audience,” both starring the Oscar- and Tony-winning Helen Mirren as Elizabeth II, has made royals a specialty. The recent criticism may suggest his winter of discontent is ahead, but Morgan has it easier than another writer who feasted on the British monarchs as material: William Shakespeare, who dramatized the reigns of seven kings.

All were in the past, with Shakespeare treading lightly around the rulers of his time, Elizabeth I and James I.

“We all imagine it being sort of sweetness and light, and we’ve all seen ‘Shakespeare in Love’ and everyone’s sitting around drinking. Actually, it was like Stalinist Russia in many ways,” Shakespearean expert Andrew Dickson said of the rigidly controlled society in which the bard worked circa 1585 to 1613.

Plays were approved by the master of the revels, a sort of civil servant with the power of censorship, said Dickson, author of “Worlds Elsewhere: Journeys Around Shakespeare’s Globe” and “The Globe Guide to Shakespeare.” Authors could and were imprisoned, or worse, for transgressions, he said.

“His very few representations of royals recent to his time were pretty flattering, and and early audiences even called them patriotic,” said Harvard teacher-scholar Jeffrey R. Wilson, author of “Shakespeare and Trump” and “Richard III’s Bodies.” Theater in general was viewed as illusory and deceptive, he said.

“He told this politicized version that was flattering to the powers that were in his time,” Wilson said. It became the “dominant framework for telling English royal history all the way through the 18th and 19th centuries. It’s now called the ‘Tudor myth,’” he said, a reference to the House of Tudor that ruled for more than a century.

Lesley Manville, who plays the queen’s sibling Princess Margaret this season, said she defers to those in charge of “The Crown” on whether a disclaimer is or isn’t warranted.

“For my part, I can only be crystal clear that what I’m doing is a drama,” Manville said. “We’ve never supported it to be anything other than a drama about a real family, a very world famous family.”

Staunton said she’s grateful that the season addresses a period that was “quite tumultuous, and therefore that creates quite a good drama.” She traced the recent protests about the series directly to the queen’s death.

“There’s no doubt that if we were releasing the series two years ago there wouldn’t be this amount of sensitivity, which again is absolutely understandable,” Staunton said. She found herself deeply affected by the queen’s death, which she learned of after a day of taping on the show’s sixth season.

“’Why am I feeling so distraught?'” she recalled asking herself. “But of course I’d been living with her for two and a half years” of preparation and production.

For Pryce, working on the series has provided a better understanding of the royal family.

“They’ve always been a part of society and it looks like they’re going to continue for some time,” he said. “I’m looking forward to King Charles’ reign, and seeing what he can do to change things.”