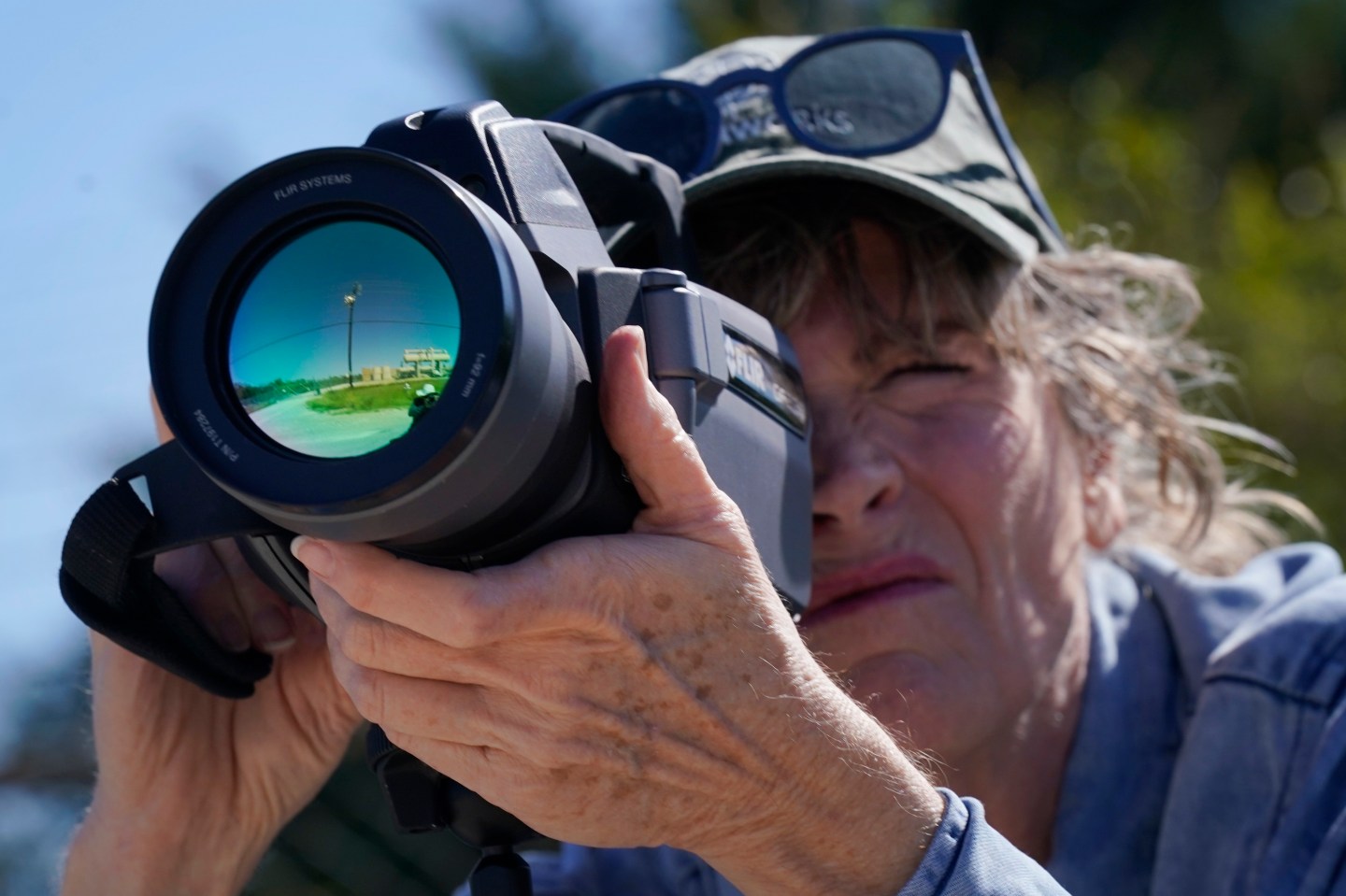 As Sharon Wilson pulled up to the BP site in Texas last June, production tanks towered above the windblown grass roughly 60 miles southeast of San Antonio. Cows and pumpjacks lined the roadsides.

All looked placid. But when Wilson flipped on a high-tech video camera, a disquieting image became visible: A long black plume poured from a flare pipe. Her camera, designed to detect hydrocarbons, had revealed what appeared to be a stream of methane — a potent climate-warming gas, gushing from the very equipment that is supposed to prevent such emissions.

“It’s very discouraging and depressing, but mostly it’s infuriating,” said Wilson, a field advocate for Earthworks, which promotes alternatives to fossil fuels. “Our government is not taking the action that needs to be taken.”

Methane is the main ingredient in natural gas. Measured over a 20-year period, scientists say, it packs about 80 times the climate-warming power of carbon dioxide. And according to the International Energy Agency, methane is to blame for roughly 30% of the global warming that has occurred since the Industrial Revolution. Aerial surveys have documented huge amounts of methane wafting from oil and gas fields in the United States and beyond.

It’s a problem the Biden administration has sought to attack in its recently enacted Inflation Reduction Act. One of the law’s provisions threatens fines of up to $1,500 per ton of methane released, to be imposed against the worst polluters. Perhaps most crucially, the law provides $1.55 billion in funding for companies to upgrade equipment to more effectively contain emissions — equipment that could, in theory, help the operators avoid fines.

Yet some of the best equipment for reducing emissions is already installed on oil and gas infrastructure, including at the BP site that Wilson filmed. And critics say such equipment is failing to capture much of the methane and casting doubt on whether the Biden plan would go far to correct the problem.

What Wilson saw at the BP site was an unlit flare. It’s among the types of equipment the EPA recommends companies consider installing to reduce methane emissions. Resembling a tall pipe, a flare is supposed to burn off methane before it can escape. Flames typically burn from the top of the flares.

But in this case, the flame had gone out, so methane was pouring from the pipe. The flare’s mechanisms are supposed to alert the operator if it stopped working. That didn’t happen in this case, according to a report by the Texas Commission on Environmental Quality.

“Energy companies have made pledges, but I’ve got to tell you, I haven’t seen anything from a practical standpoint that makes me believe there’s any reality to reductions on the ground,” said Tim Doty, an environmental scientist and former air quality inspector for the Texas Commission on Environmental Quality. “Maybe they’re making progress, but are they making enough progress to slow down climate change? I don’t think so.”

The spewing methane that Wilson detected was among more than a dozen such scenes she documented over three days in the Eagle Ford Shale, an oil and gas field in south Texas. The methane poured from unlit or broken flares, storage tanks, vapor recovery units and compressors. She found it escaping at sites owned by companies including BP and Marathon Oil, both of which have pledged to reduce methane emissions.

BP did not respond to questions about the methane leaks Wilson documented. The company says it plans to eliminate routine flaring in U.S. onshore operations by 2025 and is advocating for policies to reduce methane emissions.

Marathon Oil disputed that it violated any regulations. A spokeswoman said the company recognizes the impact of greenhouse gas emissions on the global climate and prioritizes concern for the environment.

Sometimes, methane escapes because the equipment designed to contain it hasn’t been properly calibrated or maintained. Emissions aren’t immediately stopped once new equipment is installed. Companies must still invest in properly designing the system and continuously monitoring and maintaining the equipment. This requires money and staff, which experts say many companies neglect.

The Biden administration hasn’t yet specified which types of equipment it recommends. But the EPA, which is working with the administration on the law’s methane reduction program, has recommended technologies for reducing methane emissions. Whether that equipment actually succeeds in capping emissions is an open question.

“There’s lots of technologies, but the reality in the field is it just doesn’t work,” Doty said.

That’s frequently also the case with another type of equipment the EPA recommends: vapor recovery units. These are systems of pipes and seals that are supposed to capture methane before it can escape from tanks. In Doty’s field work, which spans decades, he estimates that he’s seen vapor recovery units leaking some amount of methane or other hydrocarbons 75% to 85% of the time.

And hydrocarbons like methane, because they are corrosive, inevitably degrade the tanks, pipes and equipment that are supposed to contain them.

“All this stuff is going to be prone to leak — that’s just the way it is,” said Coyne Gibson, who spent about two decades as an engineer inspecting oil and gas equipment. “That’s mechanics. And there’s there’s not really any way to avoid it.”

One reason it’s hard for the industry to control methane emissions is that many leaks come from the nation’s vast gas distribution network. Millions of miles of pipelines are next to impossible to completely monitor. What’s more, Gibson said, pipelines are often buried, making leaks harder to detect.

That gas distribution network, which includes pipelines and compressor stations, is responsible for most methane emissions in the energy industry, said Antoine Halff, chief analyst at Kayrros, an energy analytics company. Using satellite data, Kayrros identified one compressor station — which adjusts the pressure of gas to move it through pipelines — that emitted methane continuously for eight days.

Some large companies have invested in infrared cameras, like Wilson’s, that can detect methane leaks at facilities. They use them on the ground, or on drones or aircraft.

The process can help operators find and fix leaks. But it’s typically done only periodically, with cameras that don’t run continuously. Every few months, some companies will send a team with an infrared camera to check for leaks from the ground or a helicopter.

Much of the time, though, there is no such surveillance. Leaks or even planned methane releases can occur during these periods, as when companies open a stretch of pipeline to release methane before doing repairs. The staffing it would take to continuously survey the nation’s 3 million miles of natural gas pipelines would likely be prohibitively expensive.

Malfunctioning flares like the one Wilson found are also a major contributor to methane pollution. Flaring is supposed to burn off 98% of the methane that would otherwise shoot directly into the atmosphere. But whether because of malfunctions or poor design, flares are releasing five times that amount of methane into the atmosphere, according to a study by the University of Michigan.

“Flares often go out,” said David Lyon, senior scientist with Environmental Defense Fund. “They’ll be unlit and venting all the gas. Or they’ll just not be burning the gas properly. So that’s that’s a really big source of methane. And often I think the operators are not aware that the flare’s out.”

The Environmental Protection Agency is writing rules on methane reduction that will further detail what would be required of companies starting in 2024 under the Inflation Reduction Act.

The American Petroleum Institute, the main lobbying group for the oil and gas industry, says methane emissions intensity declined by nearly 60 percent across the nation’s major producing regions from 2011 to 2020. But companies base their reported methane emissions on estimates, not actual measurements, another custom that the Inflation Reduction Act seeks to change.

Climate scientists have shown, using satellite data, that methane emissions are often two or three times above what companies reported. Under the new law, companies would have to actually measure and report their methane emissions. But it’s still unclear how such a measurement program would work.

“Us and many others in this field, over and over again, have shown the huge gap between reporting by countries and companies and what can actually be detected,” Halff said.

Even so, he thinks there’s reason to hope that the methane provisions in the Inflation Reduction Act will make some difference.

“Emissions keep going up,” he said. “We’re moving in the wrong direction…but the potential, the conditions, to change course seem to be here.”