‘It’s going to be pretty bad’: This part of the US is hurtling towards a winter heating crisis and consumers could pay the highest prices in decades 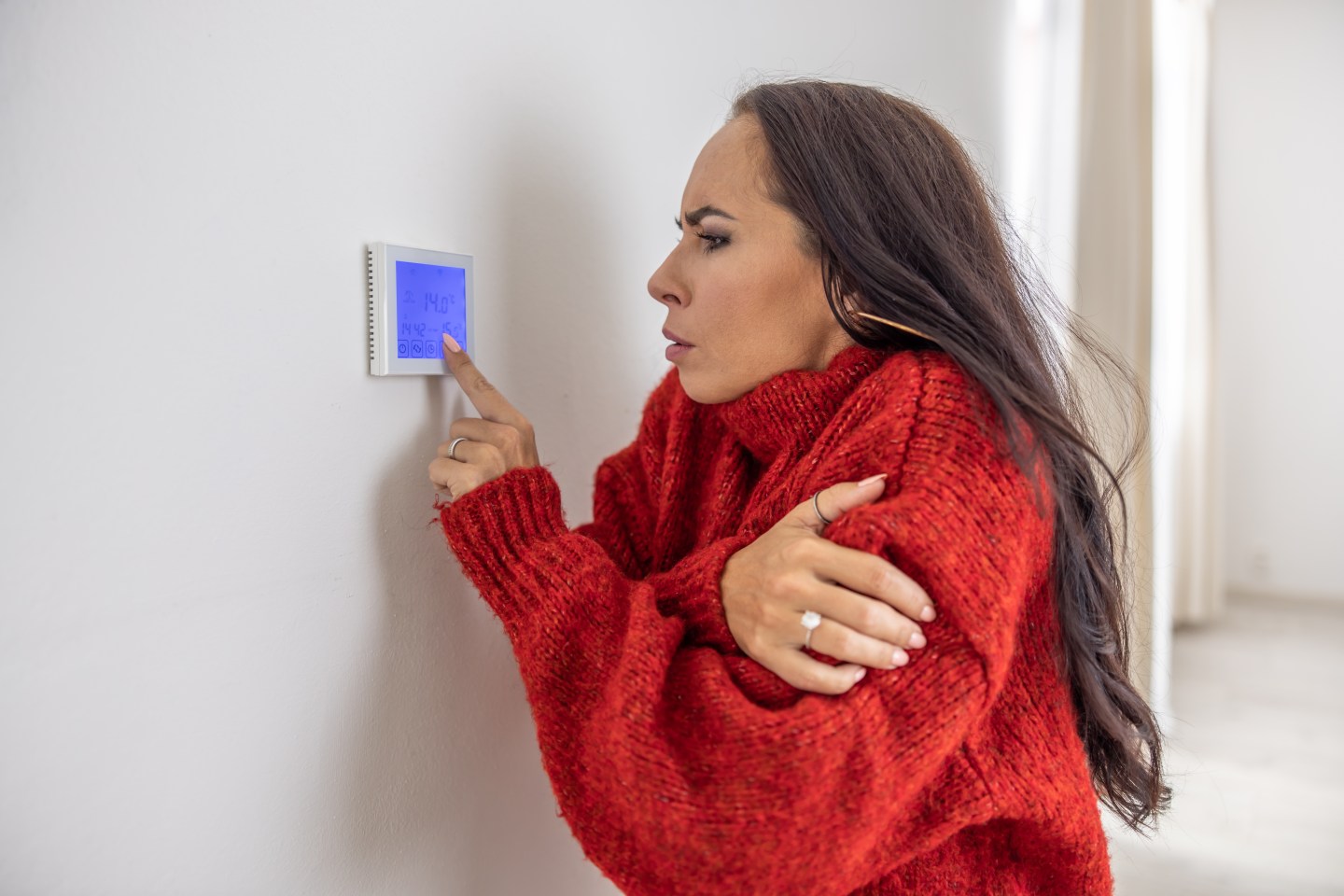 Freezing woman at home wears sweater and tries to raise the temperature on thermostat while energy crisis hits Europe in the winter.
SimpleImages—Getty

In the most densely populated corner of the US, temperatures are about to drop after a stretch of unusually warm weather. And the signs of a winter crisis are already multiplying.

Heating oil delivered to New York is the priciest ever. Retailers in Connecticut are rationing it to prevent panic buying. New England’s stockpiles of diesel and heating oil — the same product, taxed differently — are a third of normal levels. Natural gas inventories are also below average. A Massachusetts-based utility is imploring President Joe Biden to prepare emergency measures to prevent a gas shortage.

Add some cold to the mix, and in the best-case scenario, Northeast consumers will shoulder the highest energy bills in decades this winter. The Biden administration, under pressure to tame prices ahead of the midterm elections, is considering ways to stash more diesel and gasoline in New England. In the worst-case scenario, a cluster of states with a combined economy bigger than Japan’s will run out of fuel to keep the lights on and heat homes and businesses.

“It’s going to be pretty bad,” said Marcus McGregor, head of commodities research at Conning Inc. “Diesel, heating oil and natural gas prices are through the roof. When you’re on a fixed salary, how does it impact your overall budget? It has to be bad.”

The Northeast is no stranger to fuel constraints. Its dearth of pipelines and refineries means the shale fields of Texas and Pennsylvania might as well be on the other side of the world. But now, a global supply crunch intensified by the war in Ukraine is putting the region at risk of an energy disaster to rival the one menacing Europe. The Northeast will compete with countries across the Atlantic and around the world for fuel to generate power, fill up trucks and keep the cold at bay.

Rocky MacDonald, a father of three and realtor in Stoneham, Massachusetts, expects to pay over $500 for heating oil to keep his three-bedroom ranch house warm this winter.  That’s about 20% more than last year. To save money, MacDonald and his wife are cooking dinner at home more often. When they do go out, they skip the bottle of wine.

“I just can’t believe it. The monthly expenses are crazy amounts,” said MacDonald. “I’m trying to hoard every penny.” His family’s total spending has climbed to $10,000 a month from $8,000 last year, and he’s worried that rising interest rates will trigger a housing-market slump, eating away at his income.

For Rocky and other consumers grappling with historic inflation, the outlook is increasingly dire. Americans are poised to spend the most on heating in at least 25 years this winter, government estimates show.

In the Northeast, a typical family is expected to pay $1,094 to keep warm with natural gas this winter, 23% more than last year, the Energy Information Administration said. Homes that rely on oil for heat — primarily in New England and the Mid-Atlantic — will be hit even harder, with an average bill of $2,354. Northeast households using propane will spend about $1,970. Low-income consumers will suffer the most.

“Some of the most at-risk people of suffering when heating fuel runs out are immigrants and refugees,” said Jeffrey Thielman, president of the nonprofit International Institute of New England. “We are very concerned about the coming winter.”

That creates a tricky political calculus for the Biden administration. US energy exports have surged amid pressure to help European allies replace sanction-hit Russian supplies. But Biden is also facing calls to curb such shipments to help consumers at home. For Republicans, inflation has proved to be a potent political weapon: A press release announcing a Donald Trump rally in Pennsylvania this month noted the state’s surging heating oil prices.

So far, the Biden administration is using one of the few tools it has at its disposal to tackle high pump prices: It’s releasing unprecedented amounts of crude oil from the nation’s emergency reserves. But that can only go so far. US refineries are already running flat out, and without excess capacity to process the crude into usable fuel, the extra oil releases don’t do much good.

Of course, much depends on Mother Nature. Meteorologists are predicting relatively mild temperatures for Europe and the Northeast this winter thanks to the weather pattern known as La Nina. Gas prices for next-month delivery have tumbled on both sides of the Atlantic as a warm autumn curtails demand. But in late October, the UK’s national weather service said the country’s chances of a colder-than-normal winter are increasing.

At the heart of the Northeast’s energy squeeze is natural gas. Even after Pennsylvania’s shale boom brought abundant supplies to the region’s doorstep, constraints have persisted.

That’s because New England and the Mid-Atlantic are more reliant on gas than ever. Coal-fired power plants have shut in droves, falling victim to environmental opposition and competition from cheap gas. Wind turbines and solar farms haven’t sprouted up quickly enough to replace them. And that bounty of shale gas in Pennsylvania? Concerns about climate change have scuttled plans for pipelines to bring it eastward. The Northeast’s dilemma reveals how the energy transition, at least in the short term, is ratcheting up the pain for consumers.

Almost half the electricity generated in New England and New York comes from gas. In extreme cold, heating may take priority over running power plants, which keep the lights on.

“The New England region has been on a lousy carousel ride for about a decade now trying to address the risk that comes each winter because of its over-reliance on a single fuel source,” Allison Clements, commissioner for the Federal Energy Regulatory Commission, said in an interview.

Heating oil and diesel are also part of the equation. The number of Northeast households that use heating oil has ticked lower as more switch to gas, but that’s little comfort to the almost 20% of homes there that still rely on it. The East Coast, the one US region dependent on foreign imports, has to vie with countries struggling to replace Russian supply.  Refineries from Virginia to New Jersey have shut after failing to compete with larger Gulf Coast rivals.

A diesel shortage, meanwhile, can have devastating economic consequences.  The bulk of consumer goods moves on trucks and trains powered by the fuel, which is also used in manufacturing and food production.

The Northeast isn’t entirely isolated from oil and gas pumped from other US regions. It can pull supplies from pipelines snaking up from the Gulf Coast and other points west. Heating oil and diesel are also delivered by truck and train. In rare cases, they come by sea, though the law requires that only US-built ships deliver fuel within the country — and there aren’t many of those.

But in a deep freeze, the Northeast will need more supply from abroad. The bulk of it will come from Canada, and some will come from Europe, a region that will be hard-pressed to export fuel with its own energy security at stake as the continent pivots away from Russia.

Other supplies will arrive from overseas. Cargoes of liquefied natural gas set sail each winter from Trinidad under a long-term contract and arrive at a terminal outside of Boston. Shipments to the East Coast have also come from Nigeria and a handful of other countries.

On peak days in the winter, as much as 35% of New England’s natural gas supply comes from LNG cargoes, according to New Hampshire utility Unitil Corp. And the US will find itself in competition with buyers from the UK to Japan.

That’s also true for so-called distillates like heating oil and diesel. Last year, more than a fifth of the East Coast’s supply came from abroad.

Eventually, the Northeast may be able to wean itself off foreign fuel by ramping up renewable energy. But in the short term, there’s little relief in sight.

“It’s not gonna be pretty for the consumer,” said Robert Yawger, director of the futures division at Mizuho Securities USA.