Wall Street, Geneva and other international banking centers backed a firm with a history of oil spills in the Amazon rainforest 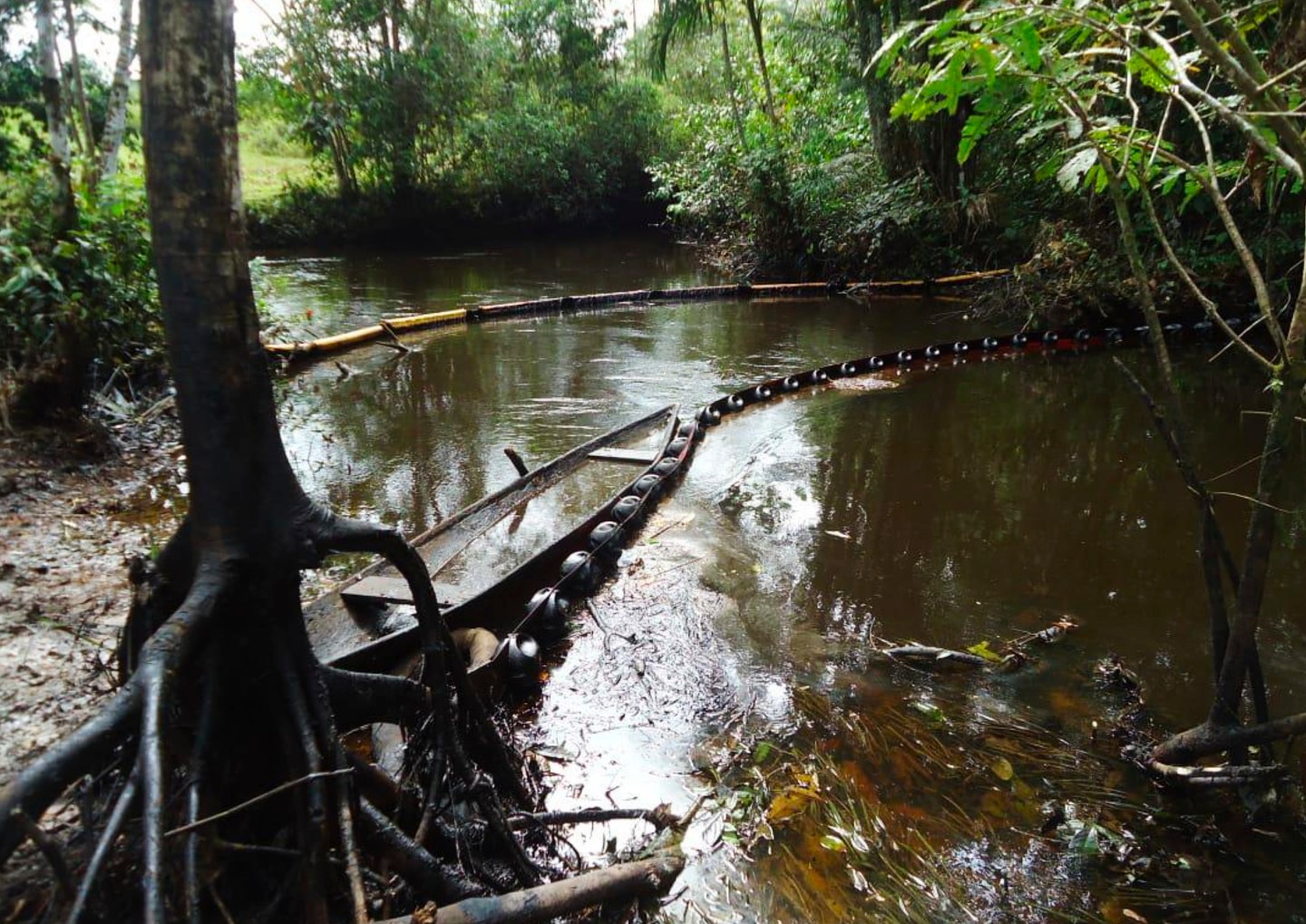 In the Putumayo region of the Colombian Amazon, Segundo Meneses’ daily routine took him to the Chufiya river, its banks verdant and waters alive with catfish and piranha. On one morning seven years ago, he noticed a dark film lapping the shore. Where the river turned a bend, it turned to black. It was an oil slick that he says went on to sicken his young family and poison their cows and pigs.

The British law firm Leigh Day is now suing Amerisur, the oil company operating in the region, on behalf of 171 Putumayo farmers, including Meneses. That spill was not the only complication with this particular oil operation. Nearby Siona Indigenous people say they reject the oil pumping and will fight it. This region is also awash in coca production and former rebel groups dispute drug territory, sometimes disrupting the flow of oil. Then there are reports by United Nations rapporteurs and an interfaith non-profit group that say the oil company, Amerisur Resources PLC, may have worked with rebels to pressure the Siona and local farmers to cease their opposition in order to keep oil flowing.

Yet none of this seemed to deter an $800 million oil and gas firm based in Chile named GeoPark Ltd. from buying Amerisur two years ago. GeoPark successfully lined up banks to help it obtain the Putumayo oilfields, indicating that even with climate changes hitting wide areas of the globe, backing for the activities that cause it is still available. Demand for crude oil continues to rise, not fall, underscoring the lure for oil companies and banks to keep operating as they have for decades.

“If banks help finance a company like GeoPark, it seems there is nothing they will refuse to touch,” said Maaike Beenes, banks and climate lead at the non-profit BankTrack, an environmental advocacy group based in the Netherlands. This deal, she said, raises numerous red flags because of Amerisur’s legacy, “from doing business in a conflict zone to fossil fuel expansion in sensitive ecosystems of the Amazon, to a history of violations of Indigenous peoples’ rights.”

The way GeoPark bought all of British-based Amerisur in January 2020, absorbing the company and keeping its brand, is a window into how some banks support fossil fuel projects even when they appear to go against their own policies.

Citibank and Itaú Unibanco offered GeoPark a bridge loan. The company then looked to banks for help issuing $350 million worth of bonds to pay for the purchase, Bloomberg data and public statements show. Brazilian Itaú Unibanco and Citibank served as “bookrunners” on the bonds, and the Bank of New York Mellon agreed to facilitate payments on them. Bookrunners advertise bonds, coordinate orders and generally use their reputation to lend confidence on bond offers.

The next year, in 2021, U.S. and European financial institutions helped GeoPark restructure its debt, making more money available to the company. Bank of America, Credit Suisse and JPMorgan advised on issuing another $150 million in bonds, GeoPark press releases show.

Even being the client of such important banks lent GeoPark credibility, said former bond trader Jo Richardson of the Anthropocene Fixed Income Institute, who analyzed data and documents from the deal.

In a filing with the British High Court, Segundo Meneses called the Chufiya river “an important source of food for my family and the whole community.”

But the river was changed by events that day. According to court documents, an armed group attacked five Amerisur oil tanker trucks and forced the drivers to empty their loads of crude oil into a wetland, where it flowed into the Agua Negra tributary, and from there into the Chufiya and beyond.

For the Colombian oil industry, rebel attacks on oil infrastructure have been a plague for decades. But the farmers argue this attack was foreseeable, given ongoing conflict in the area. For a long time afterwards, the cassava and plantain farmers say, their water was contaminated.

In the dry season, the family had no choice but to drink from and wash in the river, which gave them diarrhea, rashes and stomach aches, he said.

“For us water is life,” Meneses continued. “Maybe I will die tomorrow but my children will still live here and I do not want them to live in an area with such polluted water.”

GeoPark’s spokesperson said the company has caused no contamination, maintains the highest standards to protect the environment, and is committed to compensation for any negative impacts. Amerisur, now Amerisur Resources Ltd, cleaned up the spilled oil, the spokesperson said, and would defend itself in the courts. Regarding liability for past acts, she said, they are “questions of law and fact on a case-by-case basis.”

Oil in a conflict zone

For critics, the Amerisur assets should never have found a buyer, or financing. There were numerous red flags for banks considering helping with this oil deal, they say. Months before the first bond issuance, the Siona of the Buenavista reservation told GeoPark in a public statement they would not allow oil production or “extractive operations in our territory.” They said Amerisur had already tried to take their natural resources through “illegal and rigged action.” The tribe said it would protect its territory from “grave risks due to toxic wastes,” and “impacts on our spiritual practices.”

Colombia’s Constitutional Court recognizes the Siona as at risk of extermination. Also before the bond deal, a 2019 ruling found Amerisur left explosives on Siona land during seismic studies. The company was ordered to cease this activity. In a third, ongoing case, the Buenavista Siona, who say their lands are overlapped by two GeoPark oilfields, are seeking 52,000 hectares (128,000 acres) of disputed territory there to be added to their reservation.

GeoPark denied in an email it is working in the Siona reservation or the additional land sought by them. Relationships with Indigenous people are based on “dialogue, respect and building trust,” the company said. The company says in 2021 it requested Colombia to cancel the concession to the oilfield the Siona say overlaps their land, and is waiting for this to happen.

Paramilitaries in the area

The Putumayo region is also a hotbed of coca cultivation and cocaine trafficking. Splinter groups of former FARC rebels fight each other for control of the trade. One faction, the Border Command, is listed with the U.S. Treasury Department as a terrorist organization. In December 2020, before the second bond deal, a respected Colombian human rights NGO’s report made a strong claim. The Interfaith Justice and Peace Commission alleged the Border Command was collaborating with Amerisur to protect its oil operations.

Displaced farmers had told the commission they were ordered by the rebels not to oppose Amerisur’s exploration, one rebel reportedly saying, “We have negotiated with the company and will assure the operation.”

Five United Nations special rapporteurs for human rights also wrote to the chief of the U.N. Development Programme, Achim Steiner, warning: “Alleged links exist between the company (Amerisur) and the paramilitaries present in the area, which have been denounced by the Siona Peoples before the Constitutional Court.”

The U.N. rapporteurs wrote: “Economic actors have allied with irregular armed actors to generate, within the Indigenous communities, acts of violence that … displace the Indigenous people from their ancestral territories, thus clearing the way for … these projects.”

Colombian investigative news outlet Cuestión Pública, working with the news organization Mongabay, said two independent sources said paramilitaries had forced a farming community to attend meetings where they were ordered not to obstruct Amerisur and should accept any offers it makes. Two other independent sources confirmed an alliance between Amerisur and the rebel group, their report said.

And the Ombudsman’s Office of Colombia, the country’s human rights agency, published a risk alert on its website saying community complaints have been received about pressure exerted by “illegal armed actors” to allow oil extraction. Amerisur was not named in that alert. But the report did note Amerisur is the one of the two largest operators in the area of Putumayo.

GeoPark rejected any allegation of collaboration with Border Command as “100% false.”

“GeoPark has never had any relationship with illegal armed groups and demands the same of its employees and the entire supply chain,” a spokesperson said.

The backing by the banks buoyed GeoPark. In April 2021, James F. Park, then CEO, said in a press release the deal “demonstrates the support and credibility we have earned in international capital markets.” This puts the company in a “stronger, more flexible, less risky and less costly position,” he said.

Citibank, Itaú Unibanco, and the Bank of New York Mellon all said environmental issues were of great importance to them. Citibank and Itaú also emphasized they seriously consider social risks and conduct due diligence. Citi said it is strengthening these policies. JPMorgan said it reviews all sensitive deals with clients.

Bank of America and Credit Suisse declined to comment.

Meanwhile, in the rainforest, oil pumping continues. Meneses and his fellow farmers hope for a judgement before Christmas; British courts have ordered GeoPark to set aside 3.2 million pounds (U.S. $3.8 million) to pay if the farmers win.