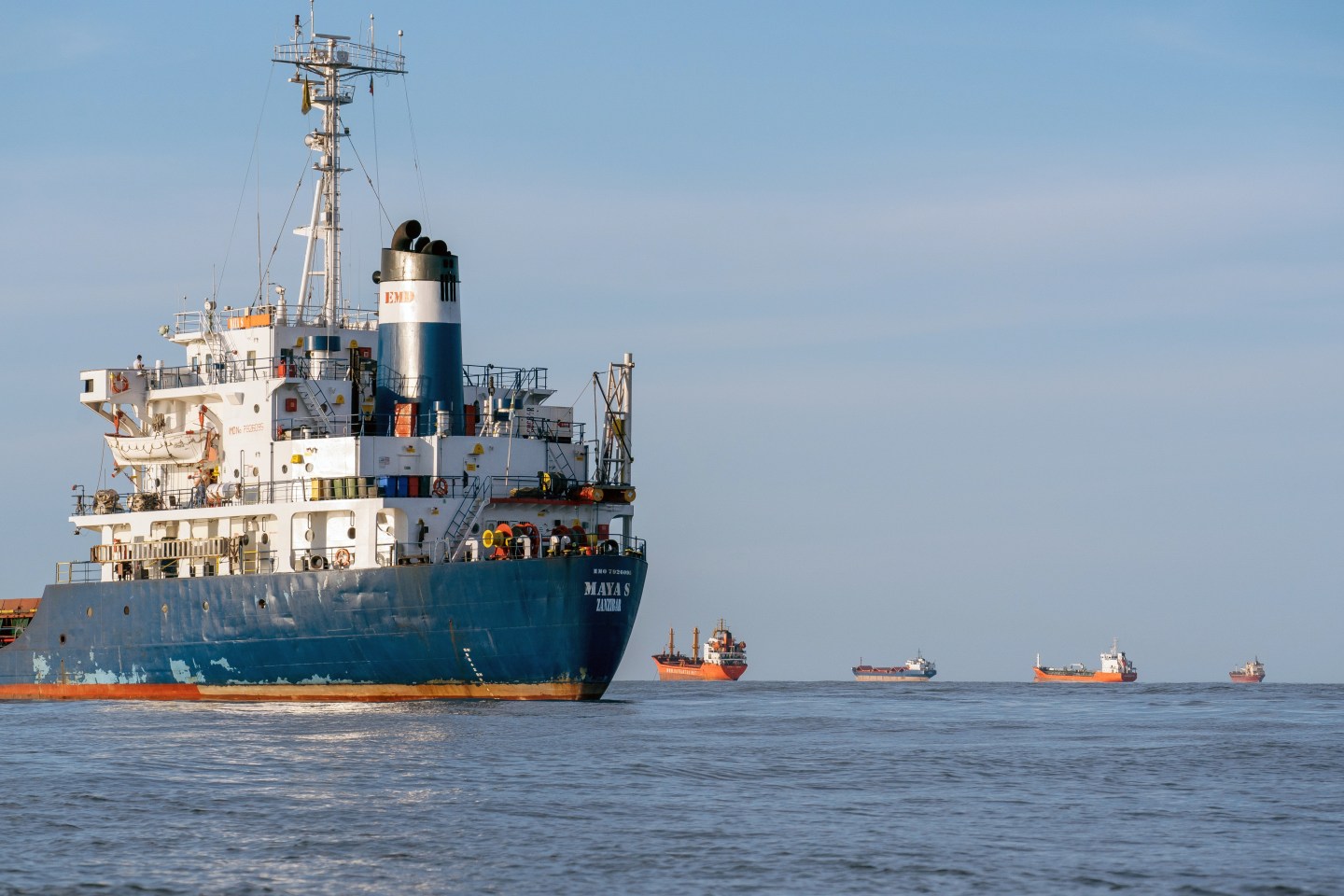 Wheat prices have surged after Russia pulled out of a UN-brokered deal to enable export of Ukrainian grain, reigniting concerns about a major global food crisis.
Andrei Pungovschi—Bloomberg/Getty Images

Wheat futures surged higher on Monday after Russia pulled out of a UN-brokered deal to enable the export of Ukrainian grains, reigniting concerns about a major global food crisis.

Chicago wheat futures rallied by around 6% on Monday, with the most active contract on the Chicago Board of Trade (CBOT) trading at almost $8.80 a bushel shortly before 8:30 a.m. ET, according to Reuters data.

Contracts pared some of their earlier gains, with wheat futures surging as high as $8.93 a bushel earlier in the morning.

The price of corn and soybean futures also rose, with the commodities gaining around 2% and 0.6% respectively.

Russia said Saturday that it was pulling out of the Black Sea Grain Initiative for an “indefinite term,” claiming it could not “guarantee safety of civilian ships” following an alleged drone attack on its own ships in occupied Crimea.

According to the U.S. State Department, the Black Sea Grain Initiative has enabled the transportation of more than 9 million metric tons of food and brought prices down around the world since it was agreed to three months ago.

Russia’s Defense Ministry—without offering evidence—accused Ukraine over the weekend of launching a drone attack on its Black Sea Fleet on Oct. 29, alleging that British Navy “experts” had also been involved in the operation.

Britain has denied the claims, while Ukraine’s government reportedly suggested that Moscow itself may have carried out the explosions and used the so-called attack as a pretext to halt the grain deal.

Ukraine’s infrastructure ministry said on Sunday that the movement of 218 ships was being blocked in the aftermath of Russia’s exit from the deal.

Fortune was not able to independently verify this report.

On Monday, the ministry said 12 ships carrying more than 354,000 tons of agricultural goods had left Ukrainian ports with the assistance of Turkey and the UN.

News of Russia’s pullback from the deal was met with international condemnation and calls for the Kremlin to reenter the agreement or risk sparking a global food crisis.

Humanitarian aid organization International Rescue Committee (IRC) warned of “catastrophic consequences” from Russia suspending its participation in the deal, saying the war in Ukraine had already caused food inflation in low-income countries to surge to almost 90%.

Shashwat Saraf, the IRC’s East Africa emergency director, said the renewed blockade of grain exports in the Black Sea had prompted “grave concerns” for countries like Yemen, which relies on Russia and Ukraine for almost half of its wheat imports and where more than 19 million people need food assistance.

“The deal brought a ray of hope—now this hope is shattered again,” he said. “Like Yemen, the East Africa region relies on Russia and Ukraine for much of its wheat imports, and as Somalia teeters on the brink of a catastrophic famine, a further disruption of critical grain exports could push [it] over the edge by impacting affordability and availability of grain within the region.”

Meanwhile, UN chief António Guterres said in a statement he was “deeply concerned” about Russia halting its participation in the grain export pact, and NATO accused Russian President Vladimir Putin of “weaponizing food” and urged the Kremlin to renew the deal.

Meanwhile, EU foreign policy chief Josep Borrell Fontelles said the bloc was calling on Russia to climb down from its decision to suspend its participation.

Russia resumed its blockade of Ukrainian ports on Sunday, the Associated Press news agency reported, a day after U.S. President Joe Biden denounced Moscow’s backing out of the grain deal as “outrageous.”

“There’s no merit to what they’re doing,” Biden said Saturday, according to the AP. “The UN negotiated that deal, and that should be the end of it.”

“Any act by Russia to disrupt these critical grain exports is essentially a statement that people and families around the world should pay more for food or go hungry,” he said in a statement on Saturday. “We urge the government of Russia to resume its participation in the initiative.”

Despite dire warnings about the consequences of ending the deal, coupled with international calls for Russia to U-turn on its suspension of the pact, Moscow has said it will not consider a return to the deal until a thorough investigation of Saturday’s alleged drone strike has been carried out.

Turkey said in a statement on Sunday that its defense minister, Hulusi Akar, was in talks with his counterparts and reminding them that resuming the agreement was “for the good of humanity.”

The breakthrough deal—which was brokered in July by Turkey and the UN—was put in place to provide safe corridors through the Black Sea, allowing Ukraine to resume exports of grains like wheat, maize, and oilseeds.

Prior to the deal being agreed upon, blockades on ports in the Black Sea were “holding thousands of tons of wheat, grain, and fertilizer hostage” and putting 47 million people at risk of acute hunger, according to the IRC.