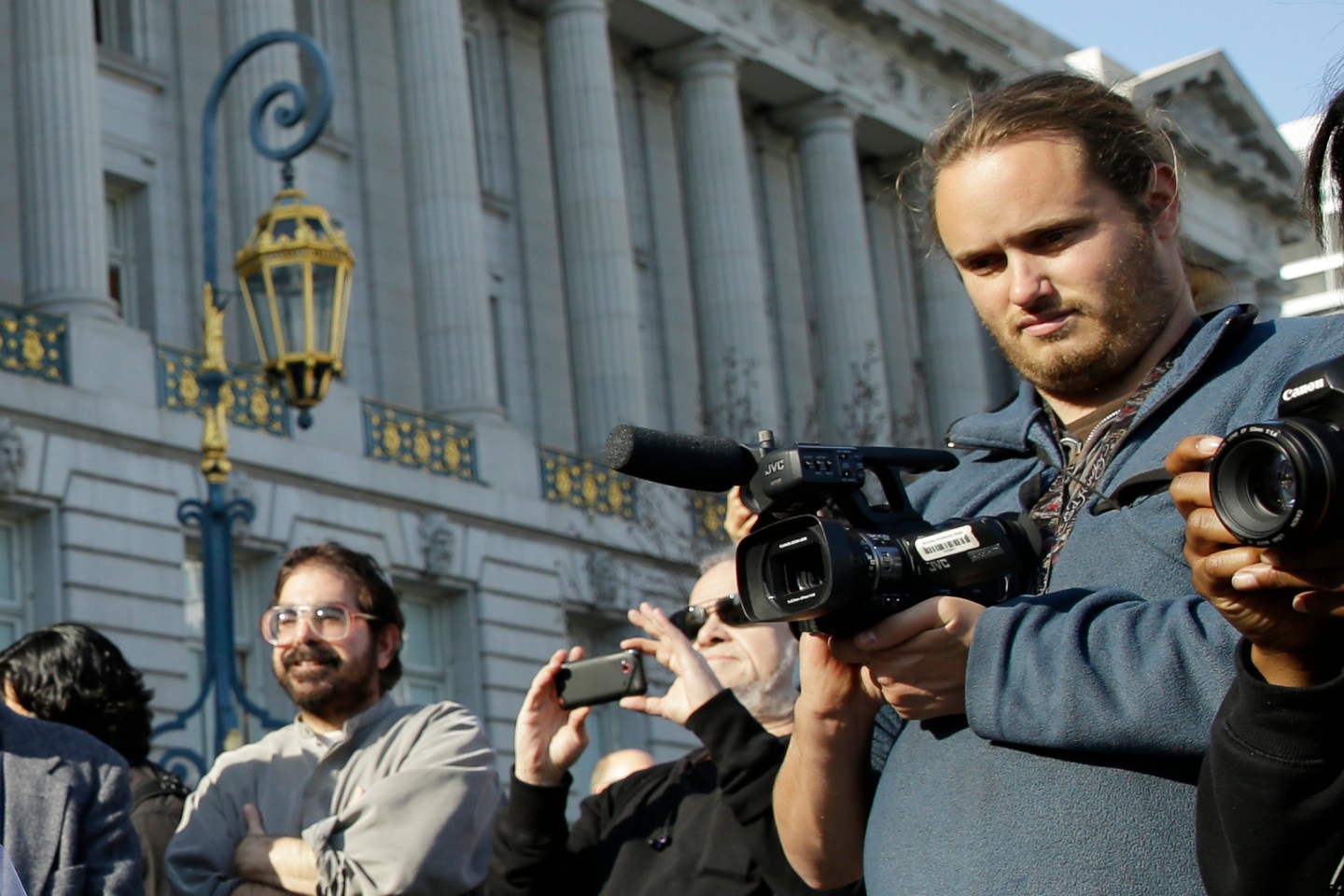 David DePape records the nude wedding of Gypsy Taub outside City Hall on Dec. 19, 2013, in San Francisco. Taub was the girlfriend DePape followed to the Bay Area years ago.
AP Photo/Eric Risberg

The man accused of breaking into House Speaker Nancy Pelosi’s California home and severely beating her husband with a hammer appears to have made racist and often rambling posts online, including some that questioned the results of the 2020 election, defended former President Donald Trump and echoed QAnon conspiracy theories.

David DePape, 42, grew up in Powell River, British Columbia, before leaving about 20 years ago to follow an older girlfriend to San Francisco. A street address listed for DePape in the Bay Area college town of Berkeley led to a post office box at a UPS Store.

Stepfather Gene DePape said the suspect had lived with him in Canada until he was 14 and had been a quiet boy.

“David was never violent that I seen and was never in any trouble although he was very reclusive and played too much video games,” Gene DePape said.

He said he hasn’t seen his stepson since 2003 and tried to get in touch with him several times over the years without success.

“In 2007, I tried to get in touch but his girlfriend hung up on me when I asked to talk to him,“ Gene DePape said.

David DePape was known in Berkeley as a pro-nudity activist who had picketed naked at protests against local ordinances requiring people to be clothed in public.

Gene DePape said the girlfriend whom his son followed to California was named Gypsy and they had two children together. DePape also has a child with a different woman, his stepfather said.

Photographs published by The San Francisco Chronicle on Friday identified DePape frolicking nude outside city hall with dozens of others at the 2013 wedding of pro-nudity activist Gypsy Taub, who was marrying another man. Taub did not respond Friday to calls or emails.

A 2013 article in The Chronicle described David DePape as a “hemp jewelry maker” who lived in a Victorian flat in Berkeley with Taub, who hosted a talk show on local public-access TV called “Uncensored 9/11,” in which she appeared naked and pushed conspiracy theories that the 2001 terrorist attacks were “an inside job.”

An Aug. 24 entry titled “Q,” displayed a scatological collection of memes that included photos of the deceased sex offender Jeffrey Epstein and made reference to QAnon, the baseless pro-Trump conspiracy theory that espouses the belief that the country is run by a deep state cabal of child sex traffickers, satanic pedophiles and baby-eating cannibals.

“Big Brother has deemed doing your own research as a thought crime,” read a post that appeared to blend references to QAnon with George Orwell’s dystopian novel “1984.”

In an Aug. 25 entry titled “Gun Rights,” the poster wrote: “You no longer have rights. Your basic human rights hinder Big Brothers ability to enslave and control you in a complete and totalizing way.”

The web hosting service WordPress removed one of the sites Friday afternoon for violating its terms of service.

On a different site, someone posting under DePape’s name repeated false claims about COVID vaccines and wearing masks, questioned whether climate change is real and displayed an illustration of a zombified Hillary Clinton dining on human flesh.

There appeared to be no direct posts about Pelosi, but there were entries defending former President Donald Trump and Ye, the rapper formally known as Kanye West who recently made antisemitic comments.

In other posts, the writer said Jews helped finance Hitler’s political rise in Germany and suggested an antisemitic plot was involved in Russia’s recent invasion of Ukraine.

In a Sept. 27 post, the writer said any journalists who denied Trump’s false claims of widespread voter fraud in the 2020 presidential election “should be dragged straight out into the street and shot.”