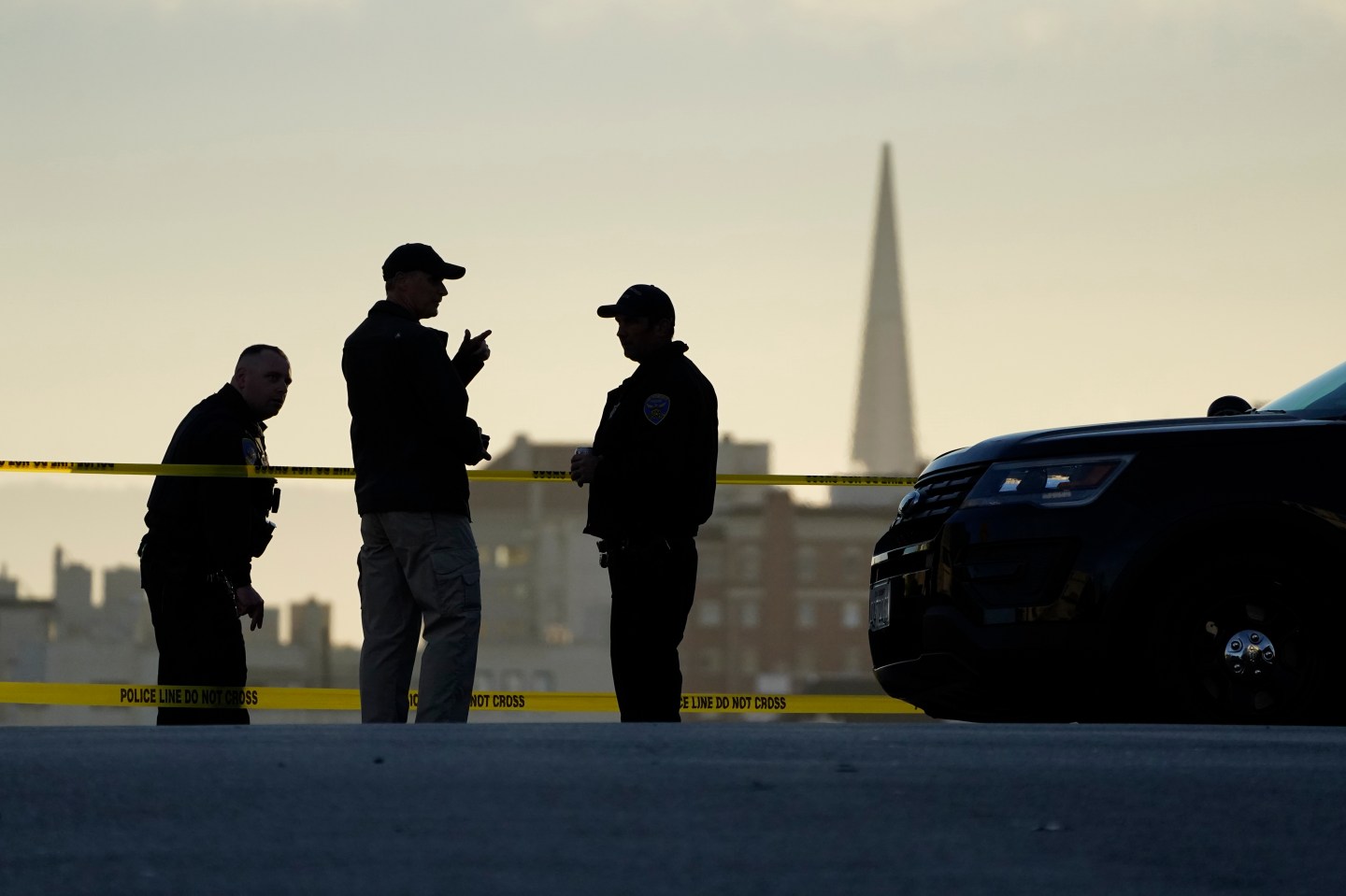 Police stand at the top of the closed street outside the home of Paul Pelosi, the husband of House Speaker Nancy Pelosi, in San Francisco, Friday, Oct. 28, 2022.
AP Photo/Eric Risberg

An America that can already feel like it’s hurtling toward political disintegration has been jolted yet again, this time by the violent attack on the husband of House Speaker Nancy Pelosi less than two weeks before Election Day.

Seizing a hammer and leaving a trail of broken glass, an intruder broke into the couple’s San Francisco home early Friday and repeatedly struck Paul Pelosi, 82. He had surgery to repair a skull fracture and serious injuries to his right arm and hands, and his doctors expect a full recovery, the speaker’s office said.

The assailant confronted Paul Pelosi by shouting, “Where is Nancy?” according to another person familiar with the situation who was granted anonymity to discuss it. The Democratic congresswoman was in Washington at the time.

The calling out of her name was a sign that the assault could have targeted the lawmaker, who as speaker is second in line to the presidency. The ambush was a particularly savage reminder of the extremism that has coursed through American politics in recent years, adding to a sense of foreboding with the Nov. 8 election nearly at hand.

Armed watchers are staking out ballot drop boxes in Arizona to guard against false conspiracies about voter fraud. Threats against members of Congress have risen to historic levels. Public opinion surveys show fears for a fragile democracy and even of a civil war. Former President Donald Trump continues to deny that he lost the 2020 election to President Joe Biden, and his acolytes are attempting to consolidate their power over future elections.

A new domestic intelligence assessment from the Department of Homeland Security and other agencies said extremists fueled by election falsehoods “pose a heightened threat” to the upcoming midterms.

The assessment, dated Friday, said the greatest danger was “posed by lone offenders who leverage election-related issues to justify violence.”

“It is worse than it’s ever been,” said Cornell Belcher, a Democratic pollster. “This is uncharted waters.” Belcher blamed “the mainstreaming of behavior in politics that was, once upon a time, left or right, abhorrent.”

Police have not identified a motive for the attack on Pelosi’s husband. Judging by social media posts, the suspect appears to have been stewing in a mix of conspiracy theories about elections and the coronavirus pandemic.

“It’s bad regardless of the reasons, but if it’s politically motivated, it’s just another example of political violence and irresponsibility of folks who are opening the door to that type of violence against other elected officials,” Michigan Sen. Gary Peters, chairman of the Senate Democrats’ campaign arm, said in an interview. “It’s a very sad time for our country right now.”

Politicians from both parties expressed outrage about the assault.

“This attack is shocking, and Americans should worry because it is becoming more common,” said Joe O’Dea, a Republican candidate for Senate in Colorado. “Partisanship and polarization are tearing the country apart.”

Some responses, however, reflected a sharp sense of partisanship.

Gov. Glenn Youngkin, R-Va., worked the incident into his remarks at a campaign stop for a congressional candidate as he called for Democrats to lose power in Congress.

From the Civil War and attacks on Black voters during Jim Crow to the assassination of elected leaders like John and Robert Kennedy, the United States has experienced spasms of political violence. No party or ideology has a monopoly on it.

Five years ago, a left-wing activist opened fire on Republicans as they practiced for an annual charity baseball game. Rep. Steve Scalise of Louisiana was critically wounded. In 2011, then-Rep. Gabrielle Giffords, D-Ariz., was shot in the head at an event outside a Tucson grocery store.

Today, violent rhetoric and imagery have become a staple of right wing politics in the United States, and it escalated during Donald Trump’s presidency. Democrats viewed the intrusion into Pelosi’s home as an extension of the attack on the U.S. Capitol on Jan. 6, 2021, when Trump’s supporters interrupted the peaceful transition of power to Biden.

On that day, protesters searched for Pelosi and chanted that they wanted to hang then-Vice President Mike Pence, who had defied Trump’s demands to overturn the election results.

Less than two years later, only 9% of U.S. adults think democracy is working “extremely” or “very well,” according to this month’s poll from The Associated Press-NORC Center for Public Affairs Research.

Members of the House committee investigating the Jan. 6 attack have received a steady stream of threats for their work.

“If we do not stop the big lie, perpetuated by those who seek to win at any cost, our democracy will cease to exist,” Rep. Elaine Luria, a Virginia Democrat who was assigned a security detail in recent months because of her work on the committee, said in an interview. “Then nothing else we do will have mattered.”

Nowhere has the temperature been hotter than in Arizona, a cauldron for election conspiracy theories. People inspired by unsupported claims that ballot drop boxes perpetuate election fraud have camped outside those boxes, photographing voters and their license plates as they turn in ballots.

Maricopa County Sheriff Paul Penzone said on Monday that he is patrolling around drop boxes and devoting unprecedented manpower to election security after two people armed with pistols and wearing tactical gear were seen keeping watch on a ballot drop box outside Phoenix. The incident sparked fears of voter intimidation and the potential for confrontations that could escalate into violence.

“It goes very quickly from well-intended to poorly executed, and then bad things happen,” Penzone said.

Penzone, a Democrat, said there’s “a growing toxic problem where individuals feel that it is appropriate to use forms of intimidation and threats to try to influence political outcomes.”

Left-leaning groups have filed two lawsuits against groups organizing watch parties, including one with ties to the Oath Keepers militia. A federal judge on Friday declined to order one group to stop its activities.

A 36-year-old man was arrested this past week for allegedly breaking into the campaign headquarters of Katie Hobbs, the Democratic nominee for governor and the current secretary of state. There’s no indication the burglary was politically motivated, but it alarmed her staff, which is constantly on guard for threats.

Federal prosecutors have charged three people with threatening to harm Arizona election officials, including Hobbs, since the last election.

Earlier in the week, three men were convicted of supporting a plot to kidnap Michigan Gov. Gretchen Whitmer after a trial that raised fears about paramilitary training and anti-government extremism.

Rep. Val Demings, a Florida Democrat who is running for Senate, has campaigned with a large private security detail for much of the year. It is a necessary precaution, she said in an interview, given an uptick in violent threats in the months since she served as a House manager in Trump’s first impeachment trial.

“I never thought that I would have my worst moment, feeling like I was really going to die, in the Capitol on Jan. 6,” said Demings, a former Orlando police chief. “When I had been in back alleys and bar fights and arresting people who killed other people, and never did I have the feeling on the streets like I had that day. And it was all in politics, and I’m like, ‘What is going on?’”