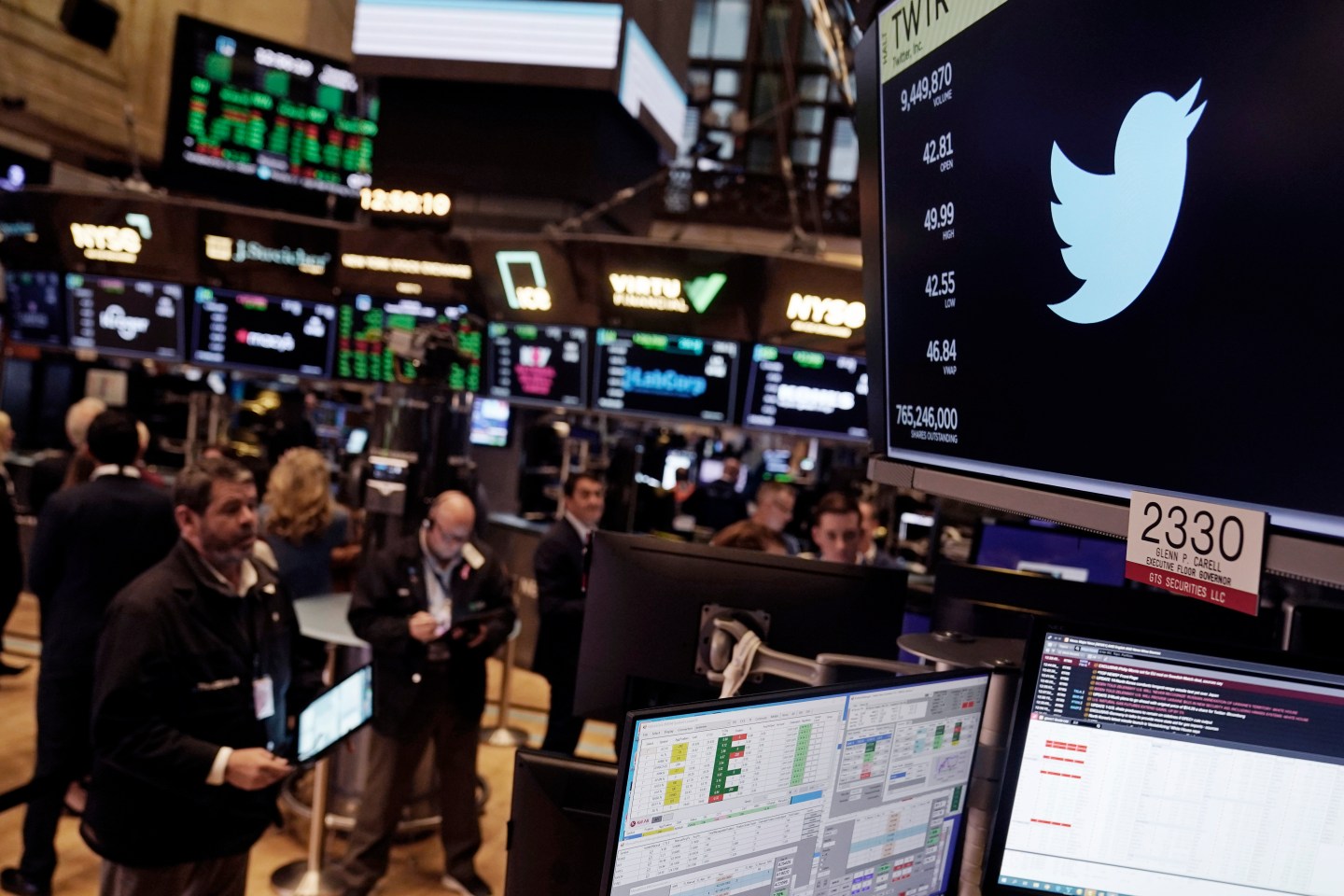 The symbol for Twitter appears above a trading post on the floor of the New York Stock Exchange, Tuesday, Oct. 4, 2022.
AP Photo/Seth Wenig, File

In the hours after Elon Musk took control of Twitter, reaction on the platform ranged from triumph to despair.

While no immediate policy changes had been announced by Friday afternoon, that didn’t stop users from cheering — or criticizing — what they expected to be a quick embrace of Musk’s pledges to cut back on moderation in what he has said is an effort to promote free speech.

Conservative personalities on the site began recirculating long-debunked conspiracy theories, including about COVID-19 and the 2020 election, in a tongue-in-cheek attempt to “test” whether Twitter’s policies on misinformation were still being enforced.

Popular right-wing pundits tweeted buzzwords such as “ivermectin,” and “Trump won” to see whether they’d be penalized for content they suggested would previously have been flagged. Ivermectin, a cheap drug that kills parasites in humans and animals, has been promoted by some Republican lawmakers and conservative talk show hosts as an effective way to treat COVID-19. But health experts have been pushing back, warning there’s scant evidence to support the belief that it works.

“Ok, @elonmusk, is this thing on..?” Steve Cortes, a former commentator for the conservative TV network Newsmax and adviser to former President Donald Trump wrote in a tweet, where he included a microphone emoji. “THERE ARE TWO SEXES TRUMP WON IVERMECTIN ROCKS.”

In a letter aimed to soothe the fears of advertisers, Musk vowed Thursday that Twitter won’t be a “free-for-all hellscape, where anything can be said with no consequences.”

But the jury is still out on what will become of the social media platform — and what it will tolerate. Observers are eyeing who stays, who goes and who might potentially come back from the list of people the platform has banned over the years. They range from Trump, to conspiracy theorist Alex Jones and former Ku Klux Klan leader David Duke — none of whom have returned to the platform so far.

The Associated Press checked at least a dozen other Twitter accounts that were suspended by the platform — including those used by right-wing activist James O’Keefe and MyPillow Chief Executive Mike Lindell — and each turned up an “account suspended” message as of Friday afternoon.

At least one still found a way to get his message out.

“I am very happy that Twitter is now in sane hands, and will no longer be run by Radical Left Lunatics and Maniacs that truly hate our country,” Trump said Friday morning in a post on his social media platform Truth Social, leaving no indication of whether he’d return to the platform or not even though Musk has said he would allow it.

“I LOVE TRUTH!,” he said, adding Twitter will be “better” if it works to get rid of bots and fake accounts “that have hurt it so badly.”

Earlier in the day, news outlets reported Kanye West, the rapper legally known as Ye, appeared to be back on Twitter after being locked out of his account earlier this month over his antisemitic posts on the social media platform.

But there was no evidence to suggest the status of his account had changed or that Musk played a role, and there was no sign of recent activity. Twitter did not immediately reply to a request for comment on whether Ye was back on the platform. The rapper and fashion designer had also been suspended from Instagram, where his account there was recently reinstated.

Meanwhile, dozens of extremist profiles — some newly created — circulated racial slurs and Nazi imagery while expressing gratitude to Musk for his new leadership. One such post shared a breaking news update about Musk taking over the company, tweeting a racial slur and the message, “thank you Elon.” Another anonymous account tweeted, “Elon now controls Twitter, unleash the racial slurs,” along with several derogatory comments.

“His acquisition of Twitter has opened Pandora’s box,” the advocacy group Ultraviolet said in a prepared statement on Friday, while also urging Musk, Twitter executives and the company’s board of directors to continue to enforce the ban on Trump “as well as violent right-wing extremists and white supremacists.”

Some users reacted to the news by threatening to quit, and others made fun of them for doing so. The terms “Elon,” and “deleting,” appeared in Twitter’s top trends Friday as users discussed the fallout. Speculation also permeated the platform. Some worried the number of their Twitter followers was plunging, theorizing that Twitter may be cleaning up bots. Other users posted unverified reports that their “like” counts were dwindling.

“Elon Musk bought a platform, he didn’t buy people,” said Jennifer Grygiel, a social media expert and professor at Syracuse University. “And we still have a choice in how we get our news, our information and how we communicate.”

Grygiel said there will be a flight to quality if Twitter descends into further chaos under Musk, and maybe that isn’t a bad thing as the platform has increasingly come to serve corporate and state media interests.

And as always, users were quick to crack jokes — aiming to cut through the disorder in more comical ways.

“In honor of Elon now owning this site, I’d like to start utter chaos,” CNN commentator Bakari Sellers wrote in a Tweet on Friday morning. “Which is better Popeyes or Bojangles and why?”